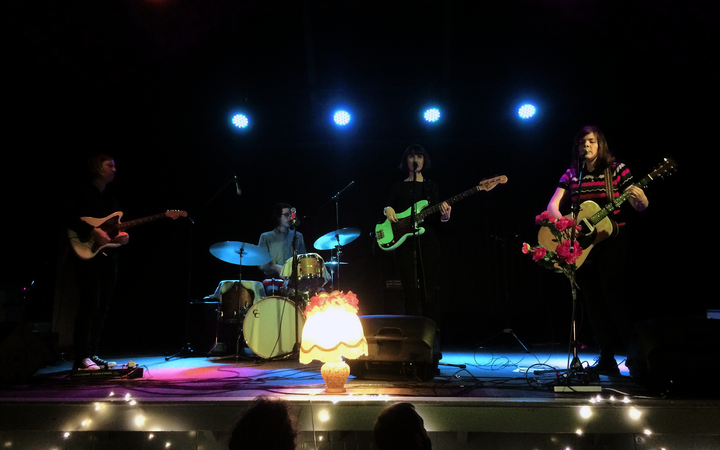 Carried out to the tiny seaside township of Paekakariki by train on Friday 17th June, I’m accompanied by a group of friends, feverish in their admiration for one Hollie Fullbrook - better known as Tiny Ruins.

Having only seen Tiny Ruins once before myself, opening for Ryan Adams in 2015 at the Wellington Opera House (where her solitary voice was swallowed by the rambunctious pre-Ryan Adams crowd), I had little idea how this iteration of Tiny Ruins would play out.

Hollie has incorporated a full band for the tour - Cass Basil on bass, Alexander Freer on drums, and Tom Healy supporting on second guitar.

The night’s tour stop is hosted at the story-book-perfect St Peter’s Hall. It's run by one of the township’s gracious matriarchs Helen Keivom, who reveals her passion for painting the small town with quality culture and entertainment during the brief conversation we had.

Helen received warm praise over the course of the night for her ‘home comforts’ hospitality, specifically the full dinner she cooked for the artists playing that night, further confirming the cozy feel of the location. 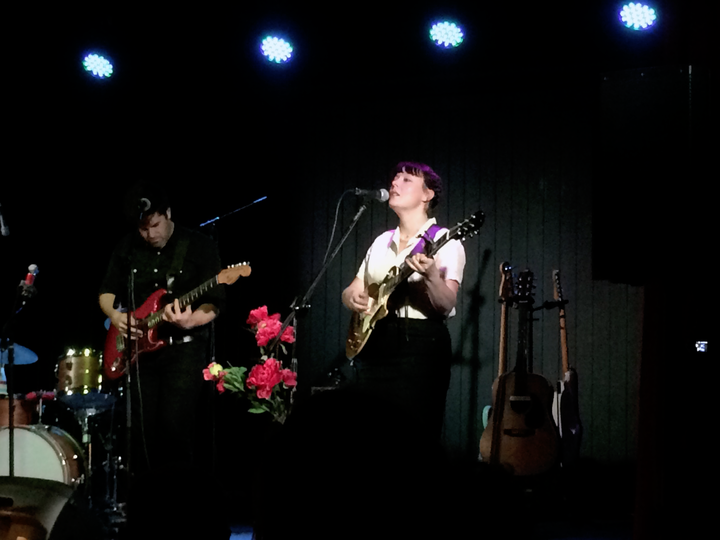 A wonderfully sombre Eb & Sparrow warm up the crowd with their brand of country noir. Performing tonight as a duo (Ebony Lamb and Jason Johnson), Ebony’s husky, pleading vocals complimented by Jason’s harmonies - voice and guitar weaving together, a blend that sounds as full and easy as any true musical match. The effortless pairing bares striking resemblance to the excellent Gillian Welch and David Rawlings, the pair sounding ‘as one’, using their voices as a single harmonious instrument. Peppering their set with playfully self-deprecating commentary, the pair are seemingly unaware of just how immediately likeable they are.

A brief intermission between acts, and Tiny Ruins takes the stage. Hollie and her band each such wonderfully proficient musicians, adept at working together as a whole - no unnecessary one-upmanship, the goal is clearly to create an intimate, inclusive insight into the stories Hollie stitches into her catalogue.

We hear lyrics plucked from ordinary situations; on ‘School Of Design’, Hollie explains her inspiration came when she stumbled into an empty school of design while on tour in Europe. Her song’s almost plain subject matter illuminated by the wonder of someone wired to always be a spectator to life’s magic.

The band plays with a poise and personality that can’t be missed as ‘Lynchian’ (a comparison perhaps brought to mind as Hollie recently collaborated with David Lynch on her single ‘Dream Wave’).

Bassist Cass minces elegantly in place; as poised as a member of a 50s girl group, the rolling tones of her bass in direct contrast to her delicate presence. Alexander Freer skilfully adapts his drum kit from song to song; with rhythms switching from stirring to tempered as each song requires, adding towels to muffle his drums, accompanying with shakers - the adaptability of his playing clearly crucial to the depth and diversity the full band version of Tiny Ruins now displays.

Guitarist Tom Healy shines especially in tonight’s line-up; wielding his Jazzmaster as a percussive instrument, as well as a means of supporting the melody. Playing with an inarguable passion - occasionally eking forward, mouthing lyrics throughout. Tom seemed to be constantly having to reign in his enthusiasm for the music in a particularly sweet way, nursing his amp for the appropriate volume and tone - a true joy to see such attentive musicianship.

‘Olympic Girls’ inspired foot tapping throughout the crowd, Tiny Ruins truly elevating their sound with points of danceability throughout their set, lush soundscapes far richer than expected from their four players.

‘Priest With Balloons’ narrating the beautiful, tragic story of Brazilian priest Father de Carli, who took leave of this world from a cliffside via a contraption consisting of a chair attached to 1000 balloons (“What was he looking for - truth, or was it Heaven?”).

The set list featured a broad range of songs with tender, observant lyrics and sparse instrumentalism from Hollie's guitar, alongside strong, bouncing tunes (showcased on 'Reasonable Man'), catering for the myriad personalities in attendance on Friday night - existing fans travelling from the city for the show, as well as locals stopping by to check out Tiny Ruins for the first time. 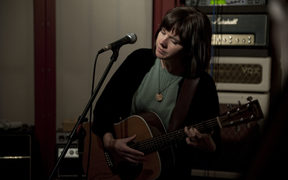 Hollie Fullbrook (aka Tiny Ruins) is this week's mixtape guest. She shares the songs that move her with Melody Thomas.  Video, Audio

Tiny Ruins at the City Gallery

Tiny Ruins' Hollie Fullbrook presents a new song 'The School Of Design' amidst the Francis Upritchard figurines at The City Gallery of Wellington, and speaks to Upbeat's Eva Radich about her… Video, Audio