Music Streaming Services
With the launch of Spotify in Australasia this week, we take a look at what the various new subscription music streaming services provide to the public, and what impact they might have on local music business - what's in it for musicians, songwriters and labels? We speak to Stephen O'Hoy of local music aggregator Digital Rights Management (DRM), Round Trip Mars label manager Jim Pinckney, Phoenix Foundation's Sam Scott, and author of 'The Economic Reality Of Streaming' Anil Prasad.

Hear Peter Griffin on This Way Up talking about Spotify here.

Ziggy Changed My Life
Gary Kemp - founder and guitarist of Spandau Ballet - marks the 40th anniversary of David Bowie's influential album The Rise and Fall of Ziggy Stardust and The Spiders from Mars, which was released on 6 June 1972.

The Sampler: Sinead O'Connor
The Irish singer-songwriter further breaks down the barriers between her public and private life in the songs on How About I Be Me (And You Be You) - Nick Bollinger takes a listen.

Opossom
Ex-Mint Chicks singer Kody Neilson is about to release Electric Hawaii, the debut album from his new project Opossom. It's an album of genre- and era-mashed psychedelic pop, which unsurprisingly bears some comparison with his brother Reuben's latest outing as Unknown Mortal Orchestra.

Golden Awesome
Wellington shoegazers dissect their sound, and reveal just what vocalist Stef Animal is singing about on their debut Autumn.

Shayne Carter
We catch up with the Dimmer front man as he ends the long-running project with a live bang this week, and find out 'what's next?' for this enduring songwriter and performer.

Bic Runga Live at Holy Trinity
The beautiful voice and songs of Bic Runga, captured in the lofty surrounds of the Holy Trinity Church in Parnell, Auckland, The set includes songs from the latest album Belle, as well as favourites such as Drive, Beautiful Collision and Bursting Through, backed by ex-Mint Chicks Kody Neilson and Michael Logie. 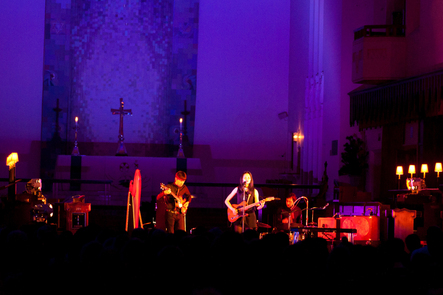 Live: Bic Runga at the Church Of The Holy Trinity, Parnell, Auckland