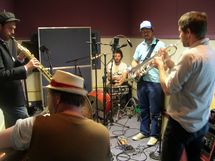 Economy Christmas Re-Session
The chaps that produced albums by The Yoots, Lord Echo, and The Shogun Orchestra this year pop by to spread some Christmas cheer. (pictured in the RNZ studios, left)

The Secret Life of the Musical Saw
The musical saw is a brain teaser - the most homely of domestic tools that, when bowed by the right player, produces the most haunting, otherworldly melodies. In this documentary Karl Steven investigates the world of the musical saw and digs out a couple of bona fide New Zealand saw players. Auckland retiree Alan Pitts shares the story of how his 10 bob saw from a tool shop took him around the world making music. Alan's near century of sawing began with being captivated by the sound of the saw on the radio in the late Thirties, lead to becoming world champion (twice) in the Nineties, and he still hasn't hung up his saw. Marton resident David Maas not only plays musical saws, but designs, builds, and exports his 'soprano' saws to players 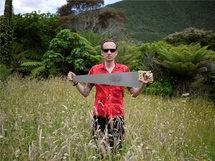 around the globe. He tells his story, shares his passion for the musical saw, gives us a demonstration of his soprano model, and explains how it all works. We also take quick look at the history of the saw both as a cutting tool and as a musical instrument, digress into other instruments that produce similar sounds in different ways like the theremin and ondes martenot, and get the chance to listen to more saw music than you've ever heard in your life! (Photo right: Karl Steven, by Laura Macfehin)

Music Futurenomics
It has been worrying times for the music industry as physical sales continue to sail downstream while revenues sink to record lows. But thanks to the  worldwide success of a few artists such as Adele, steady growth in digital sales, and widespread enthusiasm surrounding digital streaming services many in the industry are now talking up its prospects. One person who understands the current state of the music biz better than many is journalist Steve Knopper. A contributing editor for Rolling Stone Magazine and published author, Knopper chronicled the decline of the music industry in his 2008 book Appetite for Self-Destruction: The Spectacular Crash of the Record Industry in the Digital Age. More recently he wrote an article exploring the new economics of the digital age and what it holds for labels & musicians alike. We asked Steve Knopper if the tide is really turning for the music industry  - or has it  just acquired a new set of new water wings...

Panel: NZ Music Retail 2011
CD sales are at an all-time low internationally, and record stores have been shutting up shop all over the world. Digital sales are growing, but not replacing the drop in physical sales. In this panel discussion we canvas how New Zealand music retail is faring, how the charts are compiled, how many albums an artist needs to sell to make the NZ Top 10, why five new record shops have opened for business this year, and - with new digital music retail options such as Spotify finally coming to NZ - what the future of music retail in Aotearoa might look like.

The Lost Notebooks of Hank Williams
From writings left behind by country music's "lovesick blues boy", The Lost Notebooks of Hank Williams contained the debut performances of 12 previously unheard Hank Williams songs. This radio special traces how the "lost notebook" of unrecorded songs were found then recorded by a range of artists whose own sensibilities have been shaped by Williams. Featuring interviews and recordings with Bob Dylan, Lucinda Williams, Jack White, Merle Haggard and Sheryl Crow, among others.

The Sampler: Local Americana
There's been a glut of Country, Rockabilly and Americana coming out of Aotearoa this year - Nick Bollinger takes a look back at some of his favourites.

Live: Little Bushman at the Powerstation
Featherston four-piece The Little Bushman celebrate the release of their third studio album Te Oranga with a live blast of psychedelic rock, Mississippi blues & lyrical folk music under the balconies of the beating heart of Mt Eden Rd, Auckland. 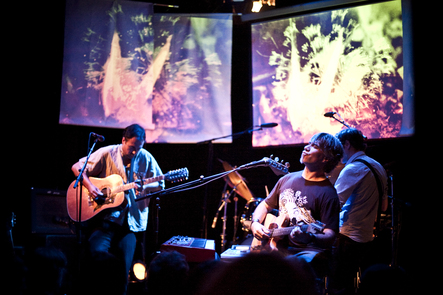 MixTape: Ladi 6
Musical guests compile a C60, and talk us through their selections.
Recently returned from a successful summer sojourn in Europe, where she played a slew of festivals and several high profile support slots, Karoline Tamati, aka Ladi 6, was named Best Female Artist and her sophomore album The Liberation of… Best Urban/Hip Hop album at the 2011 New Zealand Music Awards in November. Here she talks Kirsten Johnstone through tunes she, partner/producer Parks, and drummer Julian Dyne have enjoyed in the tour-van this year while reflecting on her musical influences and big year. (Ladi, Parks and Julian pictured left)

The Secret Life Of The Musical Saw

Artist: She And Him
Song: Have Yourself A Merry Little Christmas
Composer: Trad
Album: A Very She and Him Christmas
Label: Merge

The Sampler: Local Americana of the year