Jane's Addiction
Three original members of L.A. alt-glam band Jane's Addiction have made it through three break-ups and reunions. Now they're back with a new offering - their fourth studio album in 26 years, The Great Escape Artist. Motor-mouth Tom Morello from Rage Against the Machine interviews Jane's Addiction singer Perry Farrell. 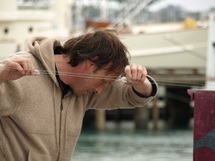 Alistair Galbraith
This Dunedin sound-explorer and instrument inventor has gone from strumming guitars in Flying Nun bands to playing entire buildings. His latest venture brings him to the Auckland waterfront where he turns an old industrial concrete silo into an instrument. Nick Atkinson finds Alistair Galbraith in the process of stringing up the huge structure… (photo left, by Angela Busby)

The Sampler: The Locals 2011
Our resident critic Nick Bollinger re-visits some of his favourite NZ releases of the past year. 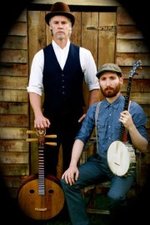 The Broadsides
The Broadsides sing songs of love and loss with swagger in their holsters and strut in their spurs. We speak to these fiddle-n-banjer playing Aucklanders about their new EP Bring Me Love.

Wheel Of Experience
Find out about an intriguing show which is part of Auckland's Random Acts street theatre festival. Spin the wheel and get a slice of NZ's history in songs of Sealers, Loggers, Diggers, and Killers. (Musicians Dave Ward, and Peter Daube pictured right)

Often in the background, Chip Matthews is one of the hardest working bass player in New Zealand with a long roll-call of acts he's contributed to. Chip was part of the first and arguably best line-up of Che Fu's band The Krates. Since then he's been a lodestone in bands such as Opensouls and Eru Dangerspiel as well as providing the bottom end for Anika Moa, Anna Coddington, Ladi 6 and Sola Rosa among many others. Now he hosts the breakfast show on Base FM and teaches at the Music and Audio Institute of New Zealand (MAINZ). Nick Atkinson follows this dedicated musician and DJ during a busy day behind the turntables, on stage, in the studio and in front of the classroom. 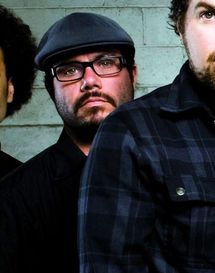 Bernie Griffen and the Grifters in session
Bernie Griffen is a charitable character who has had a lot of experience in the recording and distribution business. He runs his own record label Flaming Pearl Records, was the Chairperson for Independent Music New Zealand (IMNZ), and for more than a decade was the CEO of the now defunct distribution company Global Routes. After something of a sabbatical Bernie Griffen and his band The Grifters are back doing what he loves the most - writing songs and singing 'em live.

Artist: The Broadsides
Songs: Where's My Love, What Have I Done, Bring My Love
Composer: Meharry/Ward/Kahn/Harris/Michelson
Album: Bring Me Love EP
Label: Private

Bernie Griffen and the Grifters in Session