Jay-Z and Kanye West
Two of the biggest names in hip hop have come together to create Watch The Throne. It's been a long time coming, but is it any good?

Hip Hop Shakespeare
If Shakespeare were alive, would he be a rapper? Award-winning hip-hop artist Kingslee "Akala" Daley uses the work of London's original street poet, William Shakespeare, to educate and engage young people. Akala talks about the similarities between the bard and the MC. Listen to the interview with Akala of the Hip-Hop Shakespeare company here

Sonic Youth
We celebrate 30 years of a band that have never had a hit single, or album, but who have been hugely influential and revered in the alternative rock and avant-garde scenes.

Lydia Kavina
Lydia Kavina is a virtuoso theremin player. As a child she was taught by the inventor of the instrument, Léon Theremin, who was her grandfather's cousin. In Hamilton for the Spark Festival, we speak to her about this unusual instrument. Hear theremin maestra Lydia Kavina here.Hear an earlier program on the spooky sounds of the Theremin here and see the marvellous polyphonic Theremin here.

Hildur Guðnadóttir
Icelandic cellist Hildur Guðnadóttir has carved out a niche for herself playing atmospheric, often improvised and looped pieces, and has collaborated with Múm, Pan Sonic and Throbbing Gristle to name just a few. Hildur plays NZ gigs this week and stopped by for a chat with Radio NZ Concert's Kate Mead. 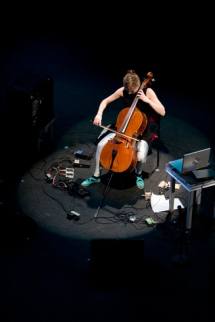 Musical Chairs featuring Peter and Tom Scott: From South London to West Auckland'.
Home Brew's Tom Scott and his dad, Peter Scott, share more than just genes. Both have music in their veins - Peter's a bass player who's played with acts as diverse as Dr John, 10cc, Madness, Bluespeak and The Jews Brothers. Meanwhile, Tom Scott is carving his own lane with his irreverent take on homegrown hip hop.
Tom and Peter Scott sit down together to swap stories about their shared musical beginnings, and the family ties that bind.