Access All Areas: A Country Divided
The winter of 1981 saw the Springboks rugby team tour New Zealand, and Kiwis divided. Recent Maori attempts to reclaim ownership of government requisitioned land at Bastion Point had focused attention on race relations. The 56-day visit of a white-only team from South Africa during the apartheid regime not only shaped New Zealand history but also a social consciousness that continues to reverberate today. For 'Access All Areas: A Country Divided' Trevor Reekie talks to Simon Grigg from Propeller Records and Will 'llolahia, former Polynesian Panther and the original manager of Herbs about why a sporting event became the source of civil unrest and cultural change in Aotearoa, and how music fitted in. Listen to Simon Grigg and Will 'llolahia speak on the relationship between the 1981 Springbok tour and how music fitted in.

@Peace
Homebrew's Tom Scott and Nothing to Nobody's Lui Tuiasau have teamed up for @Peace - writing rhymes that matter - just don't call it 'Conscious' rap... listen to the interview with @Peace here

Punches
James Duncan and Kelly Sherrod (nee Steven) released one EP back in 2006, which they promised they'd follow up shortly... but life interrupted, and Kelly moved to Nashville. The duo have been beavering away over the ether though, and have just released their debut LP 'Etheria' which is just as it sounds - full of whispered, washed out murmurs and delicate, half remembered textures. We speak to James and Kelly from Punches- Listen here.

Silver Scroll Award Finalists 2011
A quick listen to the final five vying for song of the year.

And our guide to gigs around the country.

Musical Chairs featuring Gary Thain: A Kiwi Rock 'n' Roll Casualty Part One of Two: First To The Big Smoke
Christchurch band Me & the Others were among the first local pop bands to arrive in Britain in mid-1966. They quickly became part of the club circuit and could never have known that their bass player would end up playing with top British acts The Keef Hartley Band and heavy rockers Uriah Heep. Keith Newman talks to former band members about the rise and fall of the late Gary Thain. Hear Gary Thain: A Kiwi Rock n Roll Casualty, and see photos here. 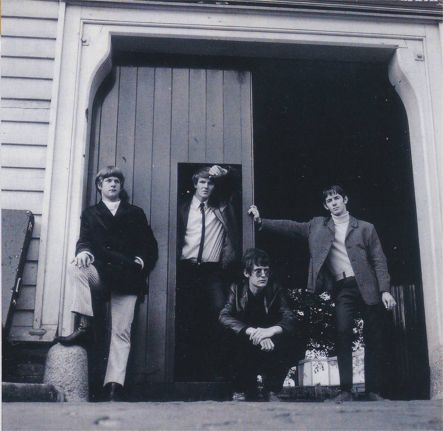 Me & The Others in London, From left to right Paul Muggleston on keyboard and rhythm guitar, Dave Chapman on guitar, Gary Thain on bass and Peter Dawkins on drums, Photo: Dave Chapman collection.