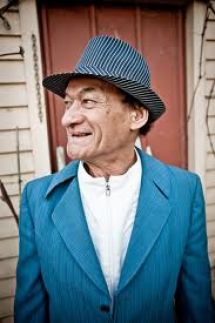 Cook Island crooner Will Crummer (pictured) is making a welcome return to his singing career after retreating to raise a family - including daughter Annie Crummer. We visit him in the studio as the string section records for his new album - and it's not just ukuleles.

We cross live to the Pacifica Festival at Western Springs in Auckland.

Funk originators The Funky Meters - they added the 'funky' in 1994, after a legal battle over the use of the name - talk about New Orleans funerals, and their syncopated strut. Listen to the interview with The Funky Meters here

Locals 'An Emerald City' add kraut-rock to their prog-psych mix for their second album 'The Fourth'. They tell of the Berlin winter, their love of Jean Michel Jarre, and fun fun fun on the autobahn. Listen to the interview with An Emerald City here

A report from last weekend's Homegrown Festival on the Wellington waterfront.

A round-up of gigs across the land.

60s pop star Shane (Hales) tells of coming 'Full Circle' with his new album, and the early days, when Eldred Stebbing hired him to front The Pleazers, and Paul McCartney sent him a telegram. Listen to the interview with Shane Hales here