A catch up with some of the musicians affected by the Christchurch Earthquake and its aftermath, including:

Paul Kean of 'The Bats' talks about video footage he took in the Christchurch CBD moments after the 22 February 2011 earthquake, The Bats trip to the Perth Arts Festival just days later, and - in his role on the Christchurch City Council Events team - what next?

More information about upcoming events will be made available via the Christchurch City Council website: www.ccc.govt.nz. Listen to Paul Kean of The Bats here.

Dudley Benson grew up around Christchurch, and spent many hours in the Christchurch Cathedral as a choirboy. Based in Dunedin now, he lost a friend in the CTV building, but his family in Governors Bay are all alright. Here Dudley Benson reflects on his love of the city, and explains the background to a song he wrote some years ago - 'It's Akaroa's Fault'. Listen to Dudley Benson here.

A live session from Lyttelton country band The Eastern. (pictured playing in RNZ's temporary HQ in Christchurch, with engineer Matt Thompson.) Listen to the session with The Eastern here 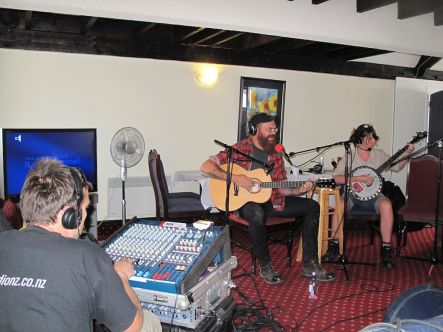 Tiki Taane's home town of Christchurch has been changed forever, and with it the lives of his whanau in the city. Tiki tells how this has recast some of the themes of his second solo album 'In The World Of Light' which is released today. Listen to Tiki Taane here.

'Ihimaera' is a compilation album and show featuring Witi Ihimaera's words set to music by a selection of New Zealand's finest musicians. This follows on from similar projects based on the work of James K. Baxter and Hone Tuwhare. We have a live song fresh from the performance. Listen to our coverage of the launch of the Ihimaera CD here.

Three-time Grammy Award winner Lucinda Williams talks about heartbreak, loss, domestic bliss, being thrown out of school for refusing to do the Pledge of Allegiance, and her beautiful new album Blessed… Listen to the interview with Lucinda Williams here.

Afro-Celt Soundsystem's Simon Emmerson talks about the similarities between West African and Irish musics ahead of their appearance at WOMAD Taranaki in a couple of weeks.

A round-up of gigs to come, and those just gone.

Graeme Allwright left New Zealand in 1948 - to pursue an acting career in Great Britain. However, life took a different turn and he ended up becoming one of France's most popular folk singers… famous for his translations of songs by Bob Dylan and Leonard Cohen. In this week's Musical Chairs, reporter Sam Coley catches up with Graeme Allwright in Paris to discuss his long and varied career, hear the songs which made him a household name in France, and his thoughts on the bombing of the Rainbow Warrior. Listen to Musical Chairs with Graeme Allwright here.

Norwood Fisher talks about the tumultuous legacy of Fishbone - a disparate, all-black oddball crew who gained a sizable cult following but never quite crossed over to a mainstream audience. The film 'Everyday Sunshine: The Story of Fishbone' is currently playing at the Documentary Edge Festival. Listen to the interview with Fishbone here