The embodiment of sex, drugs and rock 'n' roll, Keith Richards assembled 'a jumble of memories' for his autobiography 'Life' - he comments here.

Back in the early 80's few people would have put money on Metallica going on from humble beginnings to become the 5th biggest selling band of all time. For Access All Areas Mick Wall, author of the new band biography 'Enter Night' tells Trevor Reekie about the band's rocky road from LA obscurity to world domination, and the casualties on the way.

The Sampler considers the trials and tribulations of soul singer Aloe Blacc.

Auckland resident Recloose talks about his home-town, Detroit, where he made most of the tracks on 'Early Works' which has just been released. Listen here

And gigs to watch out for in the coming months.

The Musical Monsters of Stink Magnetic 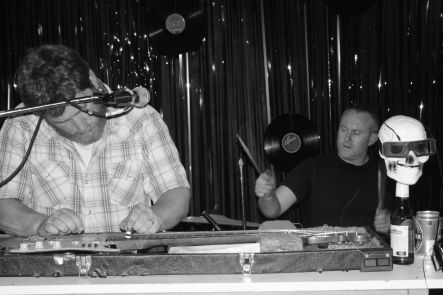 Stink Magnetic is a record label that herds many beasts - among them, a mysterious tapeman, a man-witch with his mother's nose, ghosts, zombies, and a werewolf - all with a penchant for trashy primal rock.

Head lycanthrope Dylan Herkes runs Stink Magnetic Corporate HQ, and the occasional gig, out of the old Whanganui Chronicle offices - it is a staunchly back-room operation.

Kirsten Johnstone joins the pack for a night of howling and growling as Stink Magnetic celebrates its 13th birthday with a compilation of songs inspired by werewolves.More here

And check out Stomping Nick, a local punk-blues one-man-band…