Young At Heart - the USA choir whose most youthful member is a sprightly 73 - is touring New Zealand, and has enlisted a handful of local singers to join the chorus. We visit them in rehearsal.

Hear about the history and evolution of American primitive guitar music, and bridging the gap from dust to digital with Josh Rosenthal from record label Tomkins Square. Listen here

Cantabrian electro producer Pikachunes talks about diving head-first into the Auckland music scene, and documenting the resulting turmoil in song.

Supergroove's Tim Stewart and Ben Sciascia, along with drummer Jamie Woolright form stompin' funk-rock band Svelte. We speak to them about their debut, Cat's Paw.

We drop in on the annual RounD Up band competition in Christchurch.

Nick Bollinger takes a listen to the summer sounds of Lord Echo and Shogun Orchestra - One headed by Mike August and the other Lucien Johnson. Both projects borrow members of Fat Freddy's, The Black Seeds and Twinset to play a mix of Latin and Afro jazz grooves. Listen here

On a quiet street in the leafy 'burbs of Hamilton, mad scientist and music fanatic Greg Locke set about building The Trons, a touring band of robots made out of old Meccano, number 8 wire and nuts and bolts. This fully automated group bangs out tinny rock'n'roll originals, all with the flick of a switch - but managing a band of robots is not without its challenges.
For Musical Chairs Sam Wicks visits Greg Locke and The Trons in the 'Tron. More here 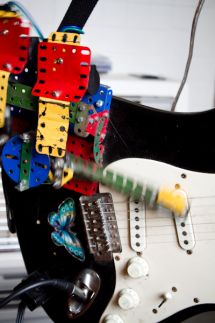