The Grateful Dead were '60s psychedelic renegades who mixed countercultural sentiment with unabashed marketing pitches. The Dead built their brand by consistently touring and in the process they became adept at cutting out the middleman. Fans became Deadheads, who recorded shows, traded tapes, and bought tickets directly from the band - crowd sourcing and direct marketing, well before the digital age.

Nick Bollinger talks with Jonathan Alley about his planned documentary on David McComb (The Triffids), and the David McComb tribute album Deep In A Dream. Listen here.

Musical Chairs featuring Scott Muir
Scott Muir (pictured below) is a man at the centre of the Dunedin music scene. He manages the live music venue Re:fuel, as well as prominent Dunedin bands The Chills and Del Girl, and mentors many others. Muir is one of the people behind the music resource website DunedinMusic.com and has a role in managing the business end of the new Albany Street Recording Studio - a co-operative venture with the University of Otago Music Department. He is on the board of Independent Music New Zealand (IMNZ), is a regional coordinator for the Music Managers Forum (MMF), and sits on the board of the Dunedin Fringe Arts Trust. He is too self-effacing to describe himself as the face of Dunedin music, but it's a hat that fits him well.

For Musical Chairs Trevor Reekie talks to Scott Muir about the diverse portfolio of roles he undertakes, and his contribution to the thriving Dunedin music community.Listen here.

Urban Tramper in Tokyo - thanks to the Japanese guy who fell in love with NZ music, and is now trying to connect underground music scenes between the two countries. 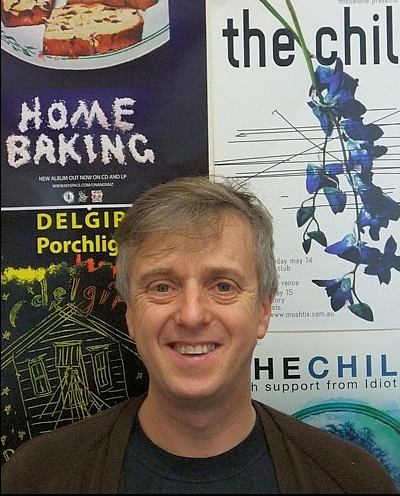