Los Angeles retroist Dâm-Funk brings the boogie back to the future - we speak to him following his sexy smooth NZ shows.

and part two of our ethnomusicological probe into the nooks and crannies of NZ music with Jordan O' Jordan. This week: Wanganui and Wellington. Listen here

Clever folkies Rosy Tin Teacaddy won the Wild Creations D.O.C. residency in the Tarawera region, scene of the erruption that buried the Pink And White Terraces - they made an audio diary and sent us new songs ahead of their stage show at Bats in Wellington. Listen here 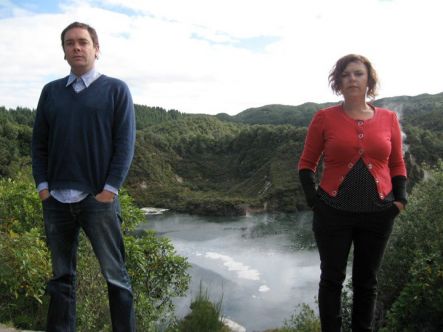 And a roundup of imminent live music events.

Live: Gin & The Cardinals at the Powerstation

Gin Wigmore first came to prominence as the unknown 16 year-old Aucklander who won the inaugural International Song Writing Competition in 2004, triumphing over 11,000 songwriters from 77 countries.

In short time she was in Hollywood recording her debut album for Universal Motown Records assisted by respected band The Cardinals, known for their work alongside Ryan Adams.

The Cardinals joined Gin for her first New Zealand gig at The Powerstation in November 2009, ahead of the album 'Holy Smoke' debuting at the top of the charts. RNZ recorded the live show and that is what we'll hear today. Listen here

George And Queen talk about their macabre subject matter and new album.