It is not only the end of the year, but the end of the decade... Over the next five weeks we'll recall some of the local songs and music stories that created the soundtrack of the noughties. Today we focus on the years 2000 and 2001.

One DJ's safari through the funky sounds of 70s Africa. 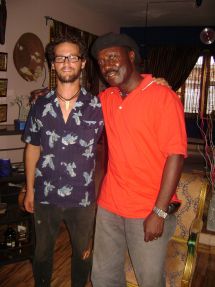 DJ and musician Barnie Duncan spent three months wandering around Africa in order get to know his record crates a bit better - a collection of the various musical styles from the late 60s and 70s post-revolution Africa.

The resulting rare interviews cover the likes of a sound engineer from the booming heyday of Ghana's afro-soul explosion, the man who started Ethiopia's first record label, Highlife band-leaders from Ghana, various superstars of the world music scene at a festival in Morocco, a psychedelic Islamic blues band in Mali, and even Fela's old percussionist. Hear what happens when a DJ uses the contents of his crates to guide him back to the cradle.

Music reviewers Simon Sweetman and Grant Smithies join Emma Smith to discuss their musical highs (and lows) from the past year.

2009 Silver Scroll winner James Milne (a.k.a. Lawrence Arabia) is joined by friends including Liam Finn, Eliza-Jane and Connan Mockasin, live at The Powerstation, Auckland on the 'Having A Baby' tour. Songs include 'The Beautiful Young Crew',' Look like A Fool' and the Scroll winner 'Apple Pie Bed'.

Celebrity musical guests are invited in to spin their choicest cuts. Today NZ music icon Dave Dobbyn selects the sounds that sum up his 30 years in music, and tells us why.