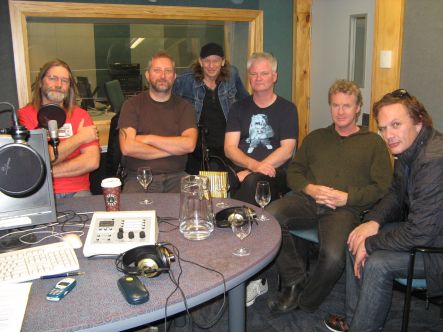 The album 'Stroke' features musicians from all over the world covering Chris Knox penned songs to support his recovery, and includes a couple of post-stroke numbers from Chris himself. A group of friends discuss the colourful Knox's influence on them and his contribution to New Zealand music - so far.

Drum n bass group Shapeshifter talk about the more metal sound of their new, chart-topping album 'The System is a Vampire'.

The Teacups play songs and drink warm leafy beverages in the Music 101 studio.

Musical Chairs featuring Dick Frizzell
Back in the day Frizzell shunned art for arts sake and was swept up in a heady mix of animation, advertising and pop art design. He designed posters for Radio Hauraki concerts and The Great Ngaruawahia Music Festival, created covers for local bands Human Instinct Ticket and Dragon and was called in to tone down David Bowie's 'Hunky Dory' cover for record executives who thought he was too outrageous and the singer a one hit wonder.
Frizzell messed with the hei tiki, delivering cubist and art deco versions and gave Charlie the Four Square Man several decades of makeovers, most recently on the cover of 'The Great New Zealand Songbook', with a guitar slung over his shoulder. Reporter Keith Newman speaks to the artist, now living in Haumoana, Hawke's Bay, ranging across topics including art, culture, consumerism, and the rock 'n roll music that's provided the sound track for his life.