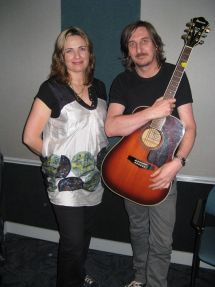 Jan Hellriegel sings songs with Wayne Bell (pictured) and talks about being 'All Grown Up'.

Catch up with Poly Styrene of 70s fem-punks X-Ray Spex.

Gin Wigmore talks to us ahead of her show with The Cardinals.

We find out about the sunlight and rainbow sounds of Roy G and the BIVinators.

Musical Chairs features keyboard player, producer and arranger Mike Harvey. He's one of the few New Zealanders to have won two APRA Silver Scroll Awards. Harvey has worked with Ray Columbus, John Hanlon, his own group Salty Dogg, and has written a string of TV, film and theatre soundtracks.

Access All Areas: Meet the father of Ethio-jazz - Mulatu Astatke.