The Brunettes play us a new song and talk about their new "stay at home party" album 'Paper Dolls'. (See video below.)

Meet The Gladeyes, whose music gives a wink, creeps under your skin and fills your head, like love that could have been.

And we meet a musician who makes and plays a biscuit tin banjo... 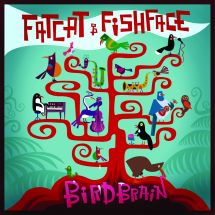 The self-proclaimed outlaws of NZ children's music have produced seven albums of original, cheeky songs and won awards in NZ and the USA. Musical Chairs featuring Fatcat & Fishface is the first ever interview with the mysterious duo, looking at the history of this uniquely New Zealand phenomenon, and the future of their bird-brained antics.

And we report back from New York new music showcase CMJ, where a large NZ contingent showcased their sounds.