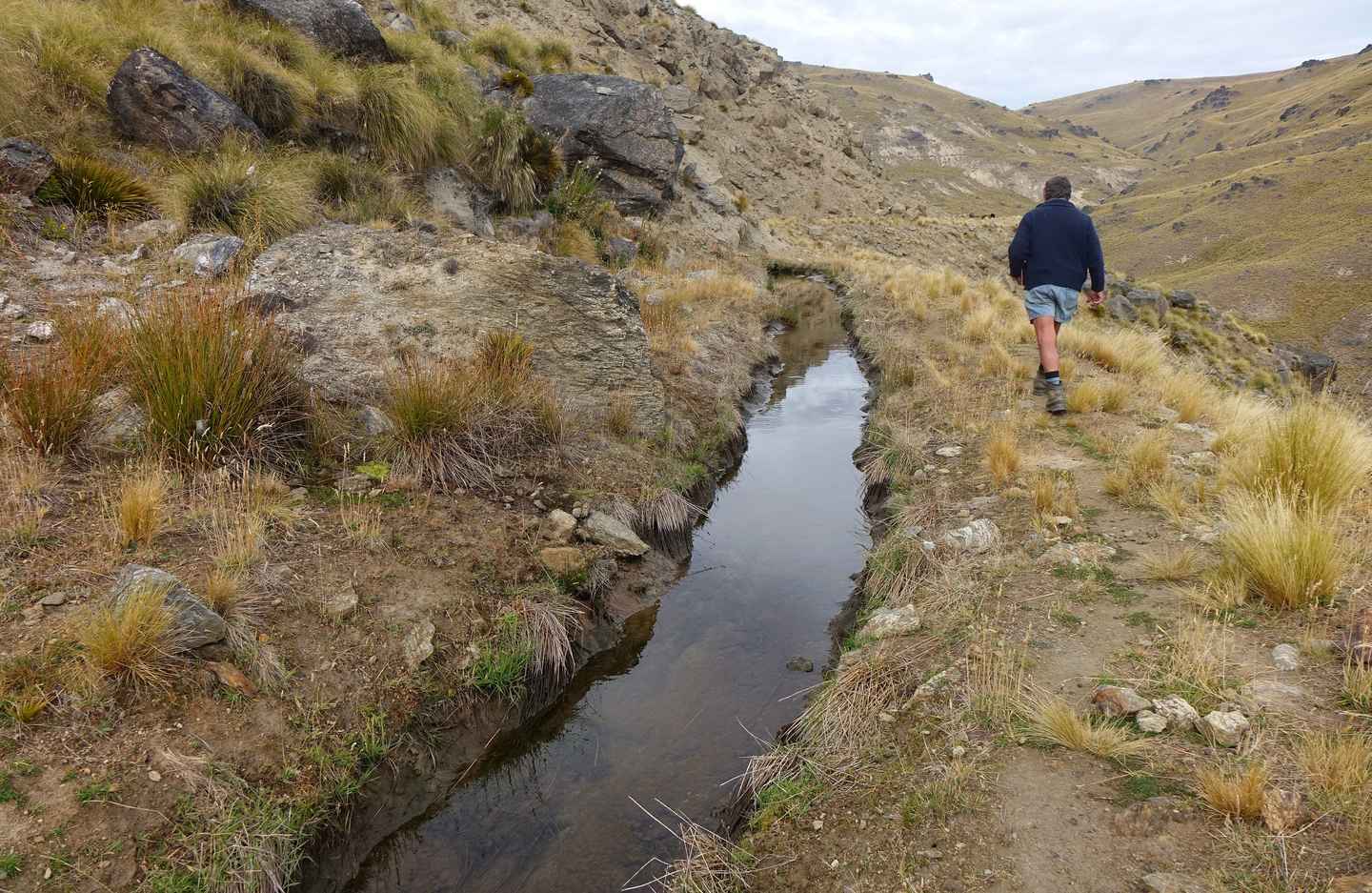 Alarm is growing in the farms and orchards in the country's driest region as irrigation rights granted during the Otago Gold Rush expire, and new environmentally sustainable allocations loom.

More than 400 so-called deemed permits, which underpin Central Otago's economy, have to be replaced with modern water permits within five years, and large cracks are appearing in the process. 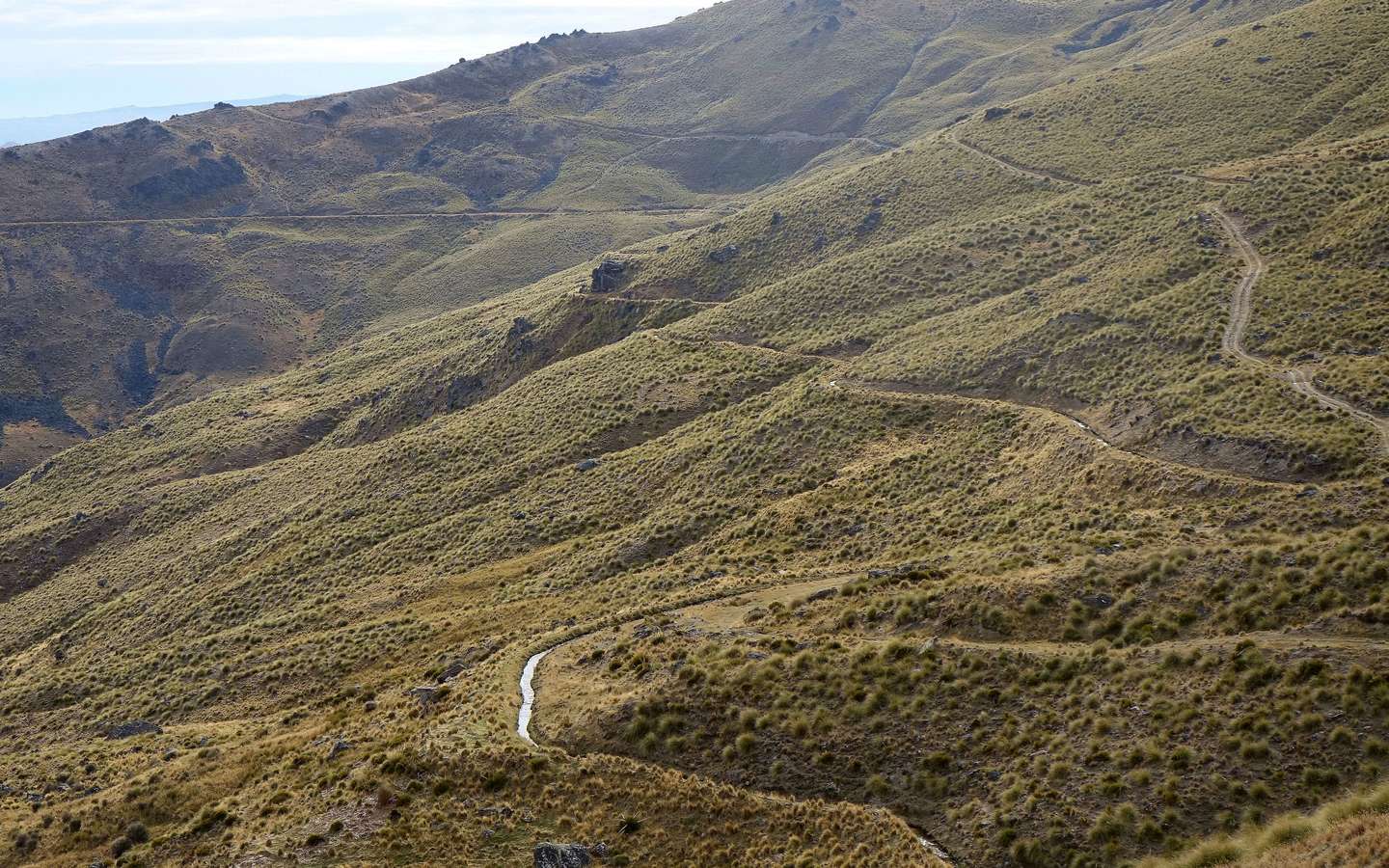 The Carrick Water Race has run for 140 years, and survived, but its users might now have to dig deep to save it.

The historical hand-dug water channel has snaked its way downhill since the gold rush days, carrying water from Coal Creek high up in the mountains to the water-short land of Bannockburn.

It was created to carry large quantities of water to sluice dams which were used to wash gold out of crushed rock.

But now that water is used for an equally precious economic endeavour: 23 orchards, vineyards and farms that would otherwise not survive. 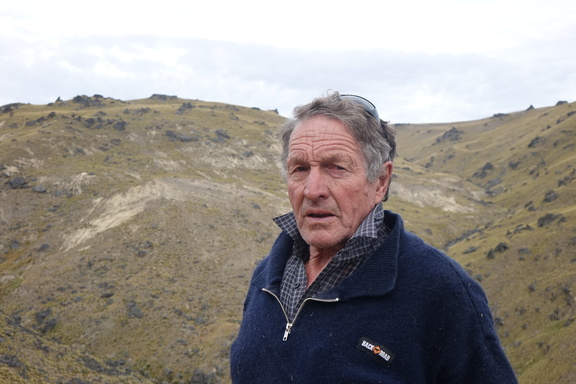 Edgar Parcell has been the caretaker for the 26km-long race for most of the past 60 years. He says that's meant many days on end, in all weathers, fixing landslips and broken pipes, and cleaning out large worms that punch holes in the race.

He says he switched to using a digger recently and put through an access road, but it's clear keeping the water flowing is a labour of love.

The permits overhaul has him worried.

The regional council has also signalled it plans to bring in minimum water flows, so-called residual flows, for waterways like Coal Creek at the start of the race, to make sure the flow remains healthy right through the summer.

That could threaten the race's future, according to Mr Parcell.

"I don't altogether blame the Otago Regional Council. It's been put on them by central government, by politicians that don't understand."

As the 1 October 2021 deadline nears, the region's farmers, wine-growers and orchardists are gearing up for a fight. 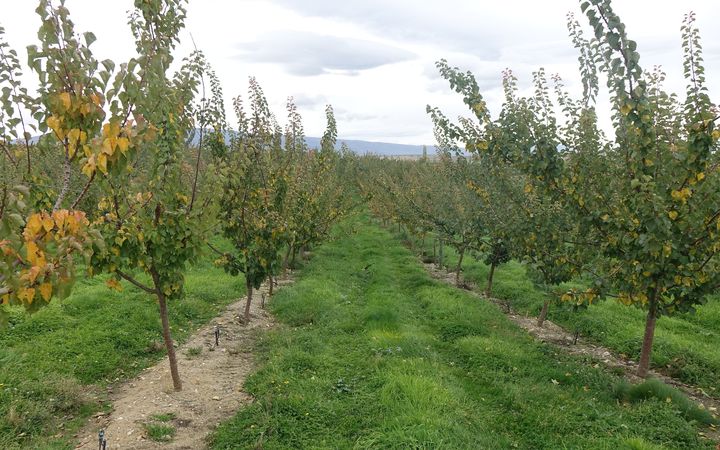 Leaning Rock Cherries is hoping to buy a third more land and the water rights that go with it. Photo: ( RNZ / Ian Telfer )

Leaning Rock Cherries near Alexandra is trying to double in size, but its plans are now in jeopardy because of the water changes.

The orchard produces 750 tonnes of cherries, nectarines, peaches and apples, mostly for export, worth $4 million a year.

The operation relies on water from the Manuherikia irrigation scheme.

They are in a scary space, says one of the company's directors, Owen Shearer - waiting to find out what the replacement of their water permits will mean, and whether irrigation will have to be reduced to improve river flows in summer.

"Any reduction's a fear. We've based our whole operation on the amount of flow we've got now. If that's cut back, we're in dire straits," he says.

"Without water this whole valley will die," she says. "We've got a huge fight on our hands to keep the irrigation quota the way it is."

Mr Shearer says the Manuherikia river catchment has been well managed for 100 years and it does not need major change. 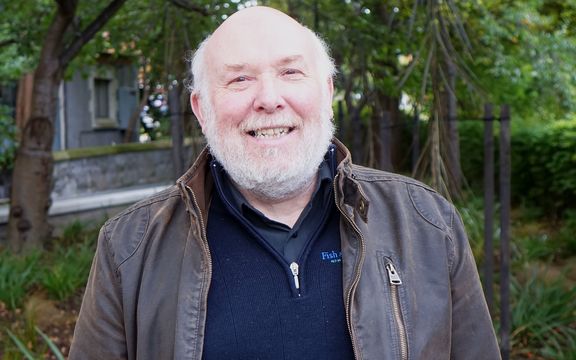 He says the common myth that the region's waterways go dry naturally only happens because all the water is taken for irrigation in summer low-flow periods.

"The common feature of Central Otago's landscape is dry streams and rivers ... It's extreme."

The end of the old deemed permits will change all that, he says.

Fish and Game's bottom line in the process will be rivers and streams flowing continuously right through summer, so that fish can move freely and naturally.

That will mean that irrigators will have to accept smaller water allocations in summer, what Mr Watson calls "reliquishing water for the environment".

He says the size of the irrigation cuts will vary and have to be case-by-case, depending on the catchment and the values the community holds or wants to see there. 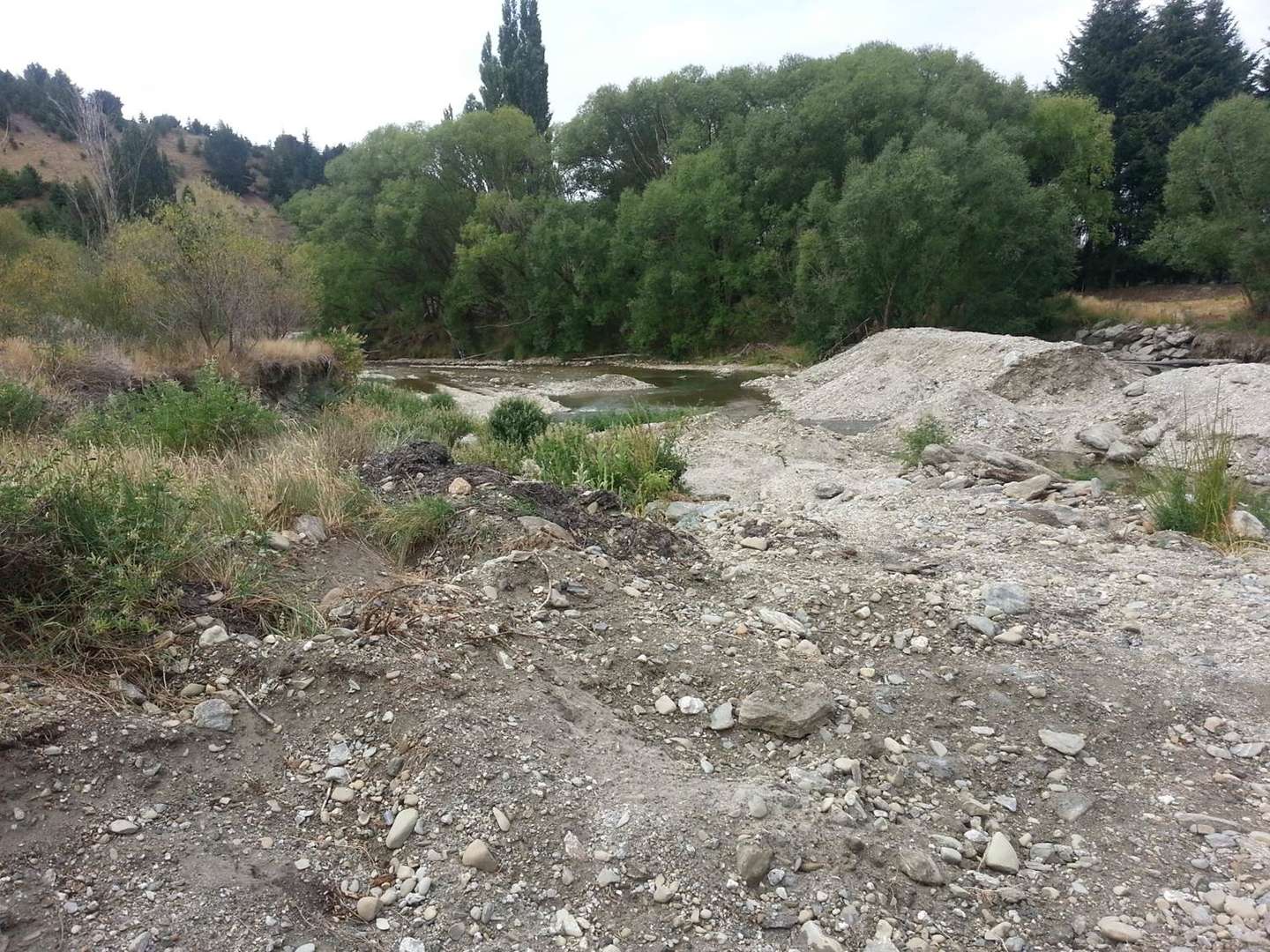 Part of the Cardrona River can be seen drying up in summer. Photo: ( Supplied/ Fish and Game )

An end to over-allocation

At the heart of the problem is that Otago's water situation is unique.

Unlike the rest of the country, water rights were first here granted for gold mining in the 1860s and, even when they were later granted for farming, they were agreed in mining courts under rules laid down in the gold rush.

The rights were renewable forever and took no account of factors like the ecology of the streams. 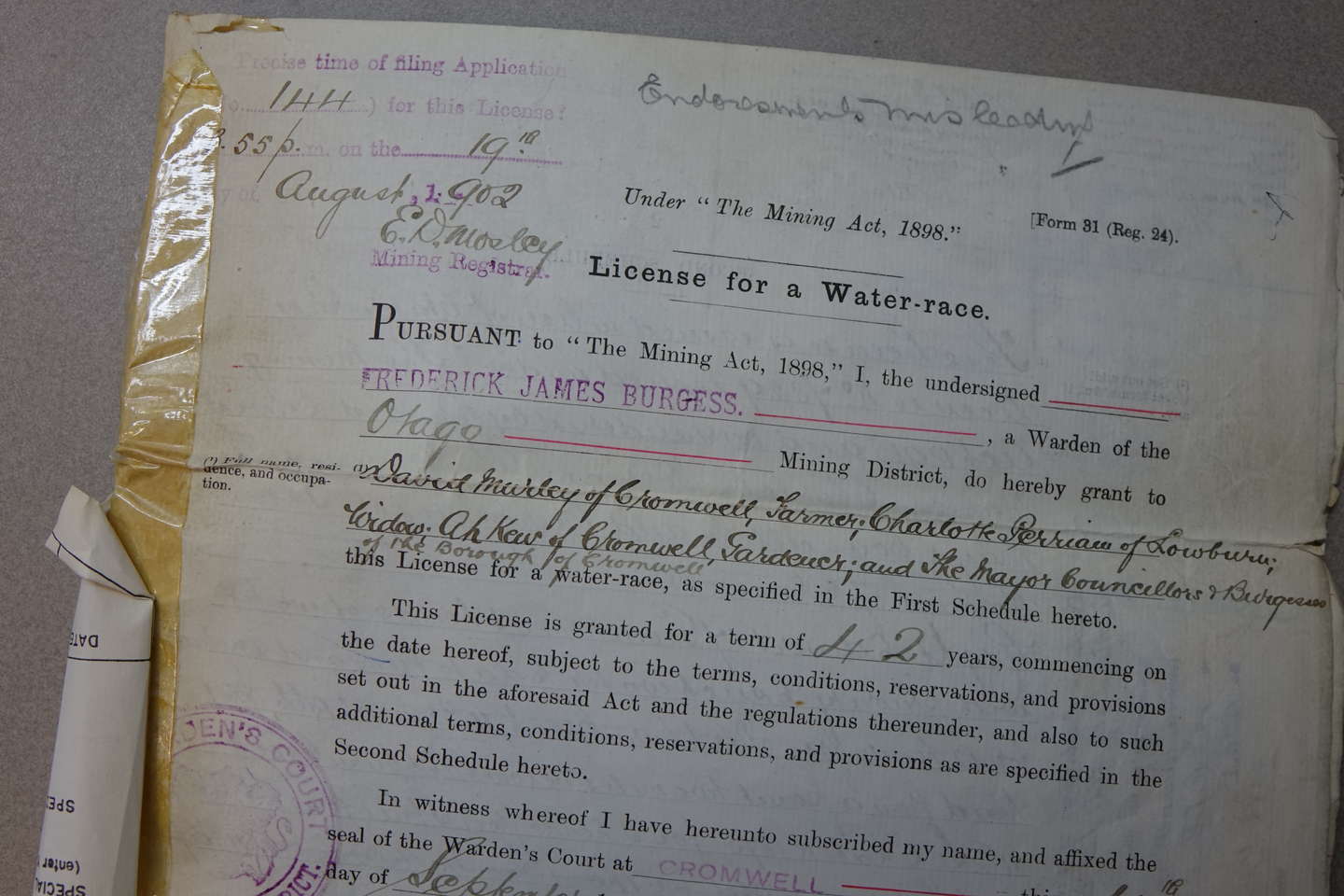 This mining water right, granted in 1902, is among the so-called deemed rights. Photo: ( RNZ / Ian Telfer )

"At the moment what's on paper that theoretically you can take, and what you can really get out of the river, are very different. The river just doesn't have that much water in it."

Where did that October 2021 deadline come from?

In 1991, the creation of the Resource Management Act gave Otago irrigators 30 years to get these deemed permits replaced with modern water permits, which had to include environmental flows and end over-allocation.

The council's message to farmers is to remind them that their current water rights all end in 2021. That's only four irrigation seasons away.

Time is running out.

This week's Insight is part of Water Fools? - a unique RNZ series running on air and online, examining the state of one of our most precious resources.