Insight: The Future of Marine Farming in Marlborough’s Seaways

Licences for more than half of the almost 600 marine farms in the Marlborough Sounds are coming up for renewal.

Marlborough Mayor Alistair Sowman says reviewing all these consents before 2024 is a landmark chance to map out a future for the region's aquaculture, which forms part of the government's vision of a $1 billion industry by 2025.

What will that future look like for those inside, and outside, the business? 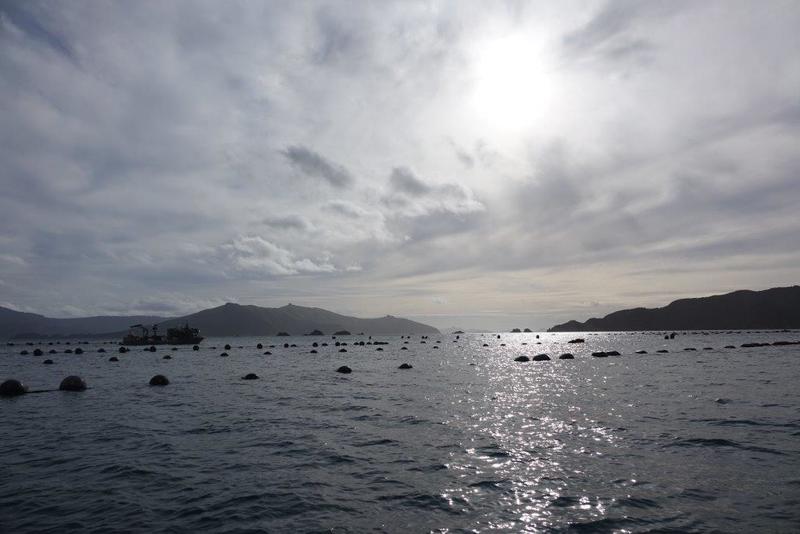 Zoning allows for marine farming over about 20 percent of the Marlborough Sounds. Photo: RNZ / Tracy Neal 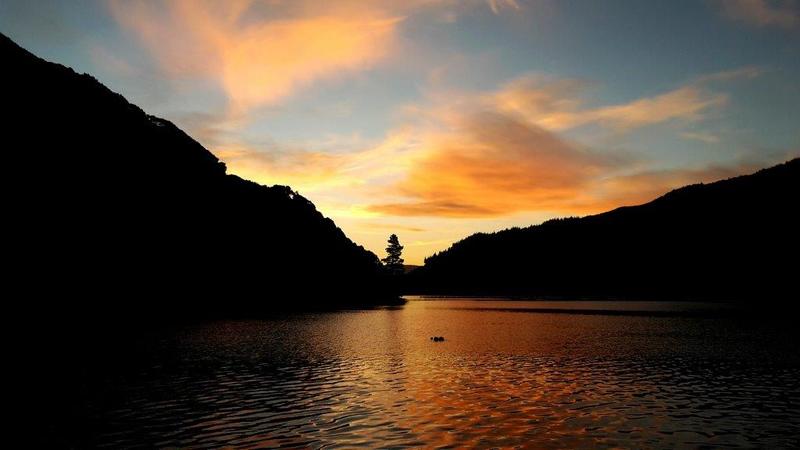 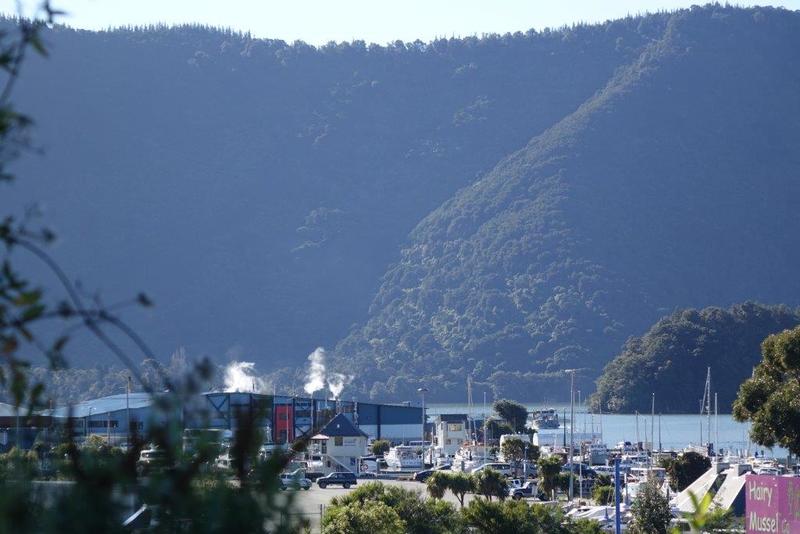 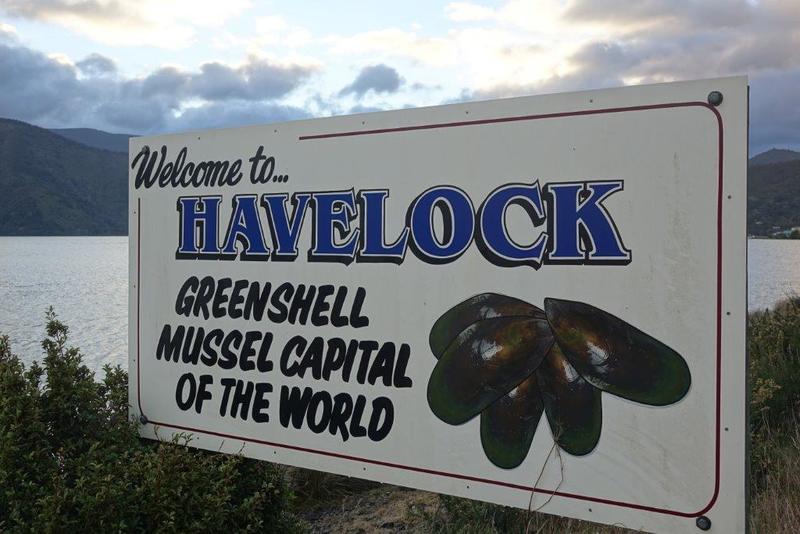 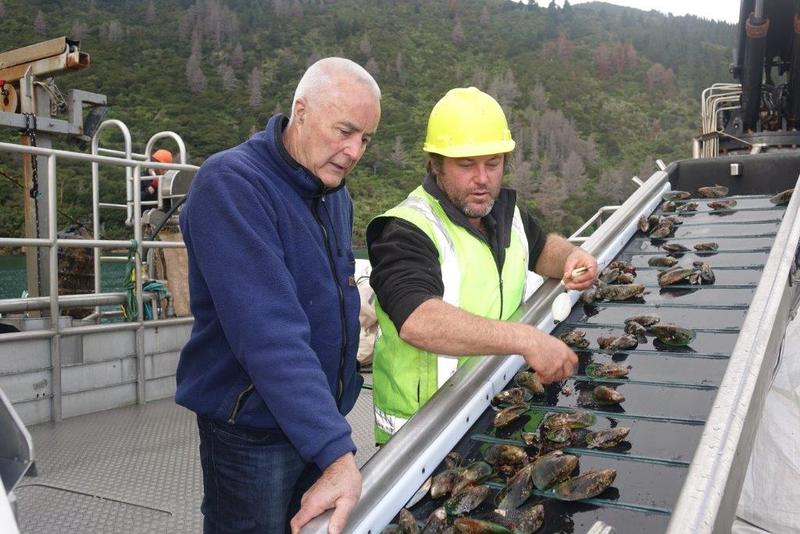 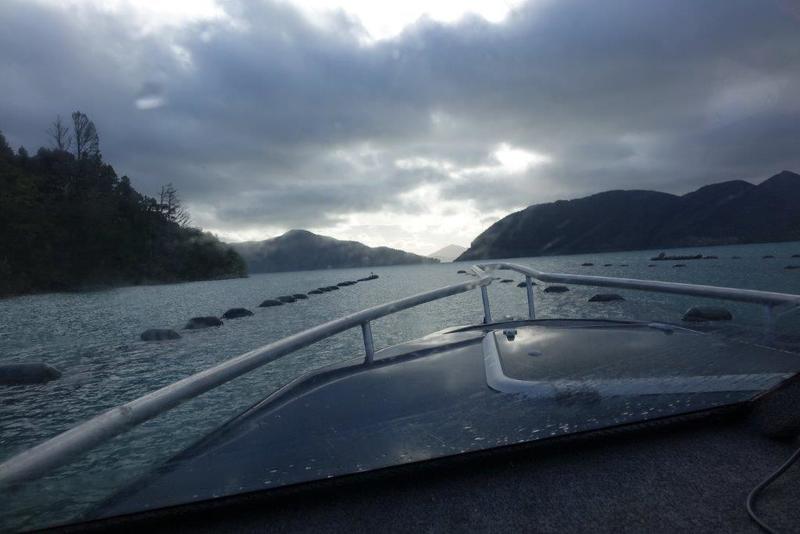 A captain's view of a mussel farm in the Sounds. Photo: RNZ / Tracy Neal 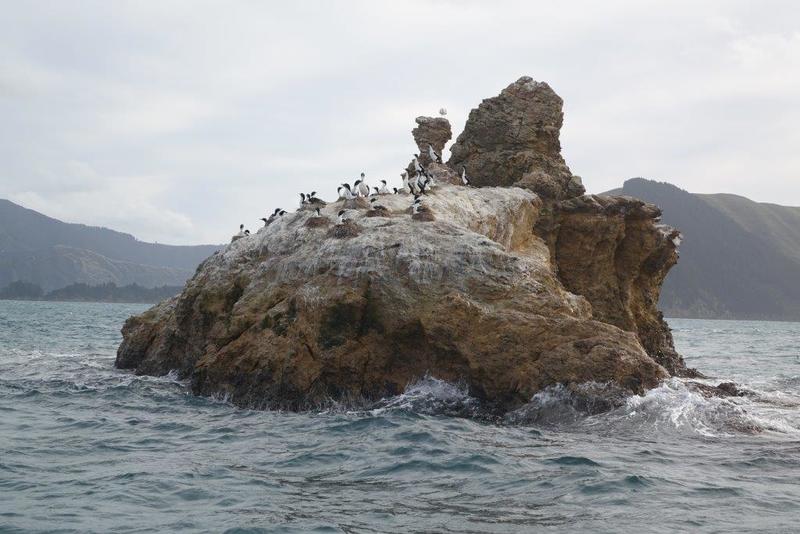 A colony of king shags in the Sounds. Photo: RNZ / Tracy Neal 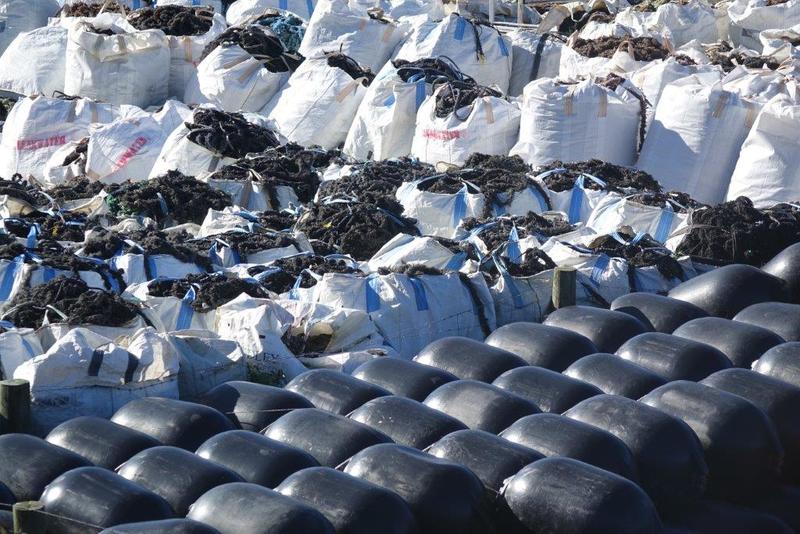 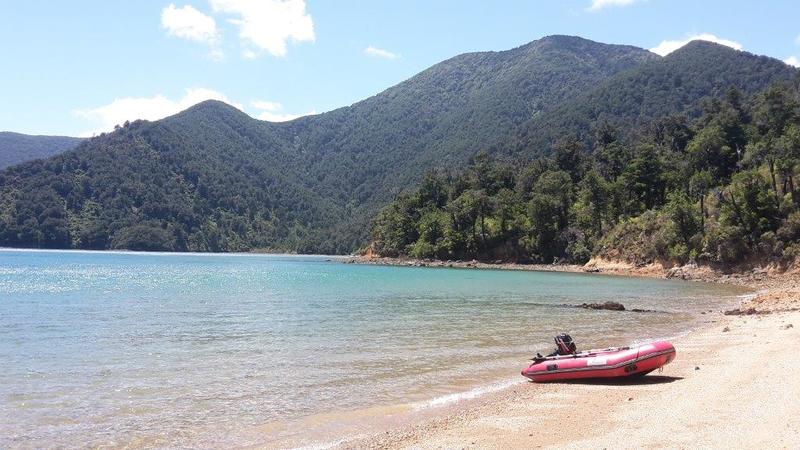 The area is home to many remote bays. Photo: RNZ / Tracy Neal 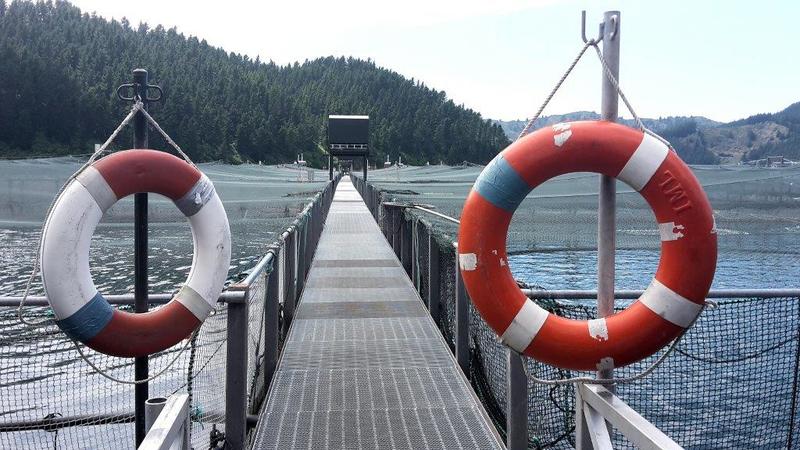 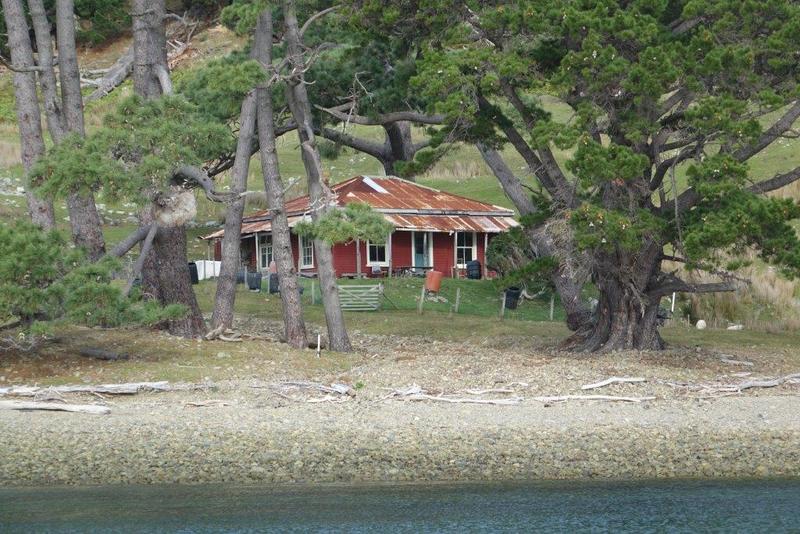 A heritage farmhouse in the Sounds. Photo: RNZ / Tracy Neal 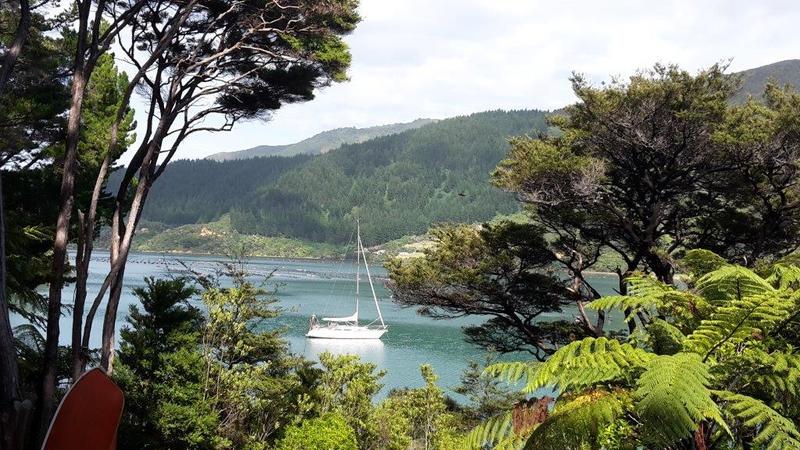 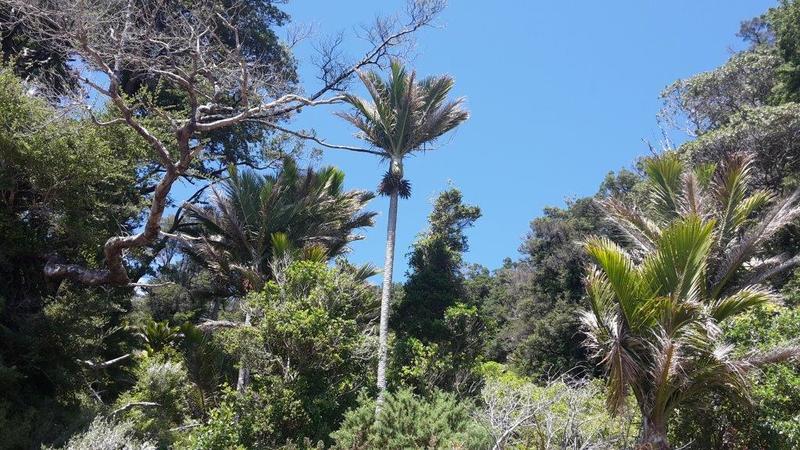 Squally Cove in the Marlborough Sounds' western reaches earned its name from the winds that bounce over its hilltops and slam into the sea below.

Its fickle weather has not deterred growth in marine farms, which now crowd the cove and the seaway leading to it from Tasman Bay.

The cove has been a stronghold for the family of Ashley Wagg since the early 20th century, and the retired master mariner has been visiting his property there since the mid-1940s.

Mr Wagg returned to the region from an overseas career in the mid-1980s to find the once-remote bay host to a growing number of marine farms, one of which was now 50m off the shoreline in front of his bach.

He did not dispute the industry's value to the region, but was disappointed with its impact on boating. By night, he said, the farms were a major navigation hazard.

He did not hold out much hope things would improve, he said.

The mayor, Mr Sowman, suggested some of these problems would be addressed by the working party set up to draft the overarching strategy that would help guide the renewal of close to 350 marine farm licences.

"We might look at bay by bay solutions, or put a grid over the Sounds and look at areas - how they might be managed. We might find there are too many marine farms in some areas and we may have to thin them out, and there may be other areas where there's greater capacity," he said.

The working party has been formed from representatives of all groups with an interest in the Sounds: industry and environmental protection groups, residents, the tourism sector, local government and central government. 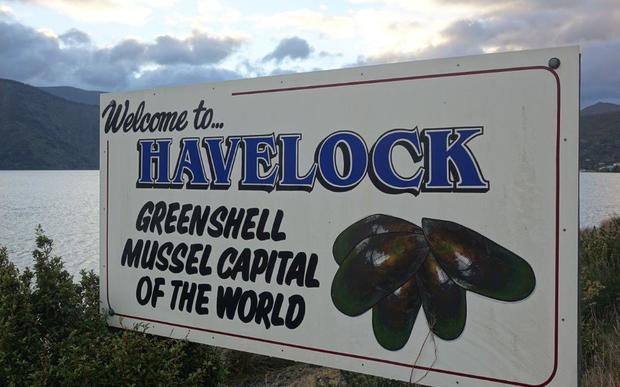 Havelock in the Marlborough Sounds is the self-proclaimed mussel capital of the world. Photo: RNZ / Tracy Neal

In the 1960s, Marlborough's waters were discovered to be an ideal location for green-lipped mussels. Industry pioneer John Young, who heads Havelock-based Clearwater Mussels, said rules governing aquaculture around the country were put in place with the Marine Farms Act within a decade - in 1971. 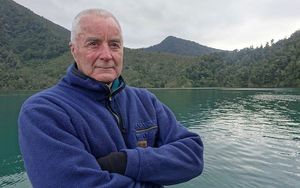 As the industry grew, a lot of farms were extended in a fairly ad hoc manner in order to increase production, Mr Young said.

"This went through a consenting process but it was so complicated that they 'grandfathered' all the licences through to 2024," he said.

Marlborough has about 1800km of coastline which many people live on, play on or earn a living from. Zoning allows for marine farming over about 20 percent of the Sounds, and current consents cover about 2.1 percent of the area.

Mr Young - backed by his science degree, political leaning towards green values and years of observation of the Sounds' biodiversity - argued the industry posed little risk to the environment.

There was scope for growth but the industry would need more help if that was to happen, he said. His firm recently spent more than $100,000 to re-consent a licence held for 30 years on one farm alone. That, he said, was the type of thing that could prevent the industry continuing.

The rules around the care and protection of the Marlborough Sounds are the joint responsibility of the Marlborough District Council and the central government. Aquaculture, fishing, mahinga kai (traditional food gathering sites), tourism and recreation all depended on the resource being nurtured. 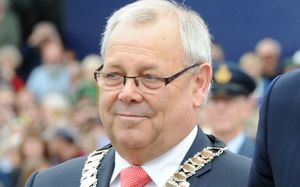 It was possible some farms would have to be moved, Mr Sowman said.

"In the early days, a farmer might have said, 'look I want to put a marine farm down the bottom of my place, just off the beach', and we'd probably say, 'yeah that sounds pretty good - go for it'," he said.

"As a result we've got this ribbon development right around the Sounds and the suggestions are maybe that's not the best way we should be marine farming. We've inherited what we've got but now we have a landmark chance to map out a future for aquaculture in the Sounds."

A report last year by the New Zealand Institute of Economic Research showed Marlborough produced 62 percent of the country's aquaculture product. It generated close to $300 million in annual export sales, but the report also showed there was growing concern about the cost of renewing consents, and the impact it was having on industry security.

The government has said it supports a national industry target of $1 billion in annual sales by 2025.

Environment Minister and local MP Nick Smith is a regular visitor to the Sounds as a keen kayaker and fisher, and said the Marlborough council had an important task ahead. 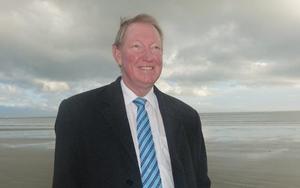 Dr Smith said aquaculture had evolved with an "innovative Kiwi number-eight wire culture", but the industry now faced costs running into the "tens of millions of dollars" to re-consent what it was already doing. The government did not think that would be a good use of ratepayer and industry money, he said.

Environmental watchdog group Guardians of the Sounds is a member of the newly set-up working group, but a spokesperson Clare Pinder said it was not yet sure of the group's motives. 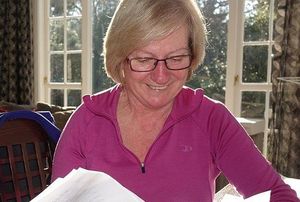 "It's great to see people coming around the table but not if it's a predetermined outcome - is it more salmon farms or is it about trying to get the best solution for the Marlborough Sounds," she asked.

Mrs Pinder said one of their biggest gripes was that marine farms used public assets but did not pay for the water space they used.

The Marlborough District Council recently announced a plan to introduce a charging regime to owners of jetties, boatsheds, moorings and marine farms for using water space. The matter had been talked about for years, and the aim was to generate funds to help cover the cost of coastal water monitoring, it said.

The council said it was "very aware" of the widespread community interest in marine farming in Marlborough. That had heightened during the application by New Zealand King Salmon to the Environmental Protection Authority to make areas available for salmon farming in areas of the Marlborough Sounds where marine farming was prohibited.

King Salmon said it had no problem with the introduction of water-space charges, as long as they were fair and across the board. 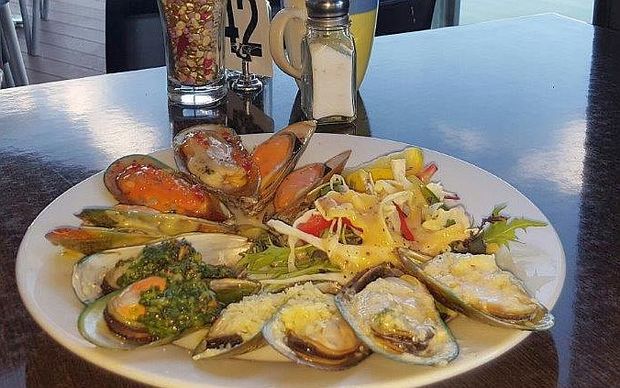 Dr Smith said such charges were justified, but there had to a trade-off in that the consenting process would become more simplified and less costly.

Mrs Pinder, however, had a different priority. There was a lot of pressure on the Sounds, and scientific assessments showed marine biodiversity was declining as a result of increased use by all sectors, she said.

"It's not just marine farming. It's the forestry industry, recreational and commercial fishing, human beings, climate change - it makes this whole process of looking to the future of the Sounds incredibly complex," she said.

The Sanford mussel processing plant in Havelock is one of the country's largest, and its general manager Ted Culley said concerns around the renewals process were unfounded. 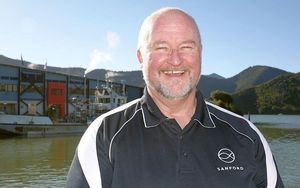 "I actually think we're looking for the weapons of mass destruction under mussel farms at the moment - I don't think they're there."

The task faced by the working group raised some interesting possibilities, which would also help answer the community's questions over when enough was enough for the industry's expansion, he said.

"They're great opportunities and we do need to think outside the square over how we move forward," Mr Culley said.

The Marlborough council said there was no timeframe yet on forming the solution, except to say the plan was expected well ahead of the renewals' final deadline of 2024.