Insight: Road vs Rail in Northland

Some Northland residents are living life in the path of a logging truck - and there seems to be no way out. 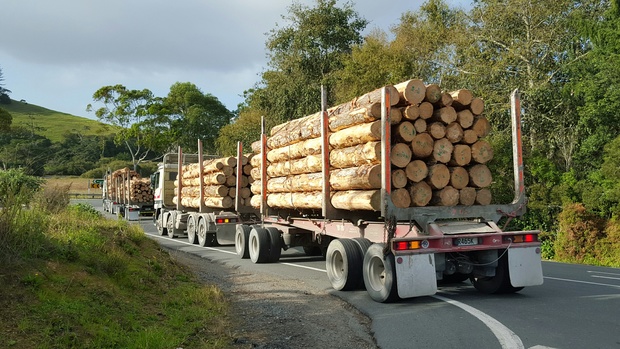 When Jon and Lynn Lammers venture onto the grass verge above their picturesque lifestyle property, they do so in fear.

And the memories come flooding back.

Insight: Road vs Rail in Northland

Ten years ago, two log trucks collided outside their home, killing one of the drivers. 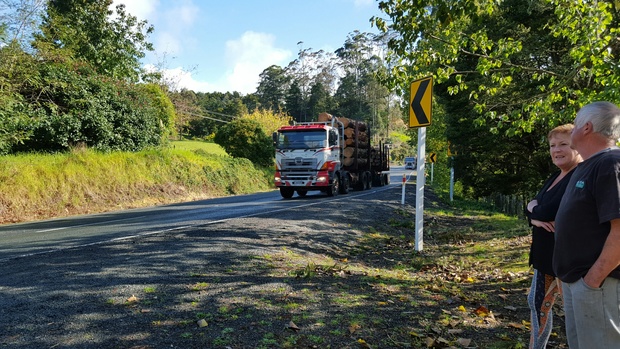 It fell to the Lammers' 19-year-old son to cover the face of the dead man from the view of passing traffic.

"It's still with my son," Jon Lammers told Insight. "He has never forgotten it. "

The winding road, with its series of S-bends and blind corners, is the link between Northland's inland freight route,  Mangakahia Road and State Highway One.

The Lammers say 300 trucks a day roar past their home, from early morning until well after dark.

"Our property values are going down and the real estate people say the only way we'd sell our place is by pictures alone. If anyone comes to see it they'll just walk away, because of the trucks. " 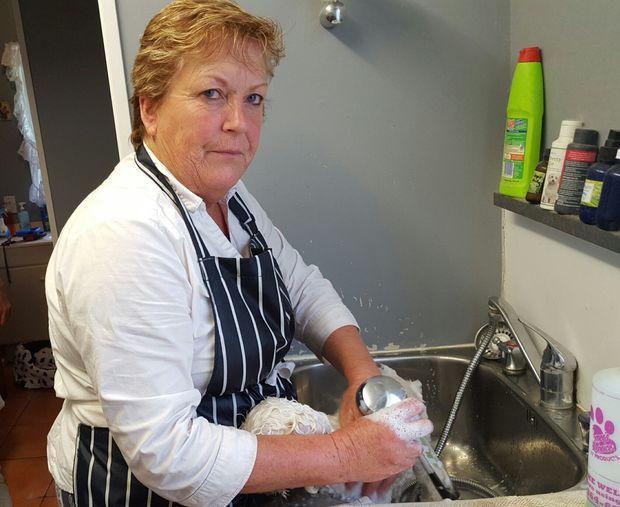 Lynn Lammers has lost customers of her pet grooming business because the log trucks make them to scared to drive to her property Photo: RNZ/Lois Williams

Her pet-grooming business has also suffered because some clients are simply too scared to make the right-hand turn into the driveway.

In the past month, six log trucks have rolled in Northland, two of them in Otaika Valley Road.

It's reached the point where Jon Lammers is now afraid to mow his verge.

"They come round that bend so fast," he said. "We see drivers using cellphones all the time. If they come round there at 40 or 50 k's they'd be fine. But they're doing a lot more than that. The council promised to lower the speed limit three years ago. It never happened." 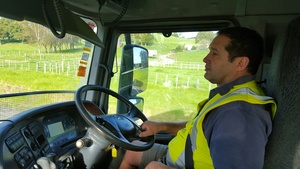 Warren Going is a log-truck driver who makes four trips a day down the road. He's never had a crash and he reckons the trick is to pay attention, and keep the speed down.

"But it's a tricky road," Mr Going said. "It's caught out a lot of experienced drivers. "

When the Lammers sold their business and bought their 4-hectare property in Otaika Valley 14 years ago, they looked forward to a peaceful semi-retirement.

But those hopes were dashed about three years ago when the log trucks began to multiply.

They are not alone in their frustration. At a recent public meeting some Otaika Valley residents threatened to blockade the roads. 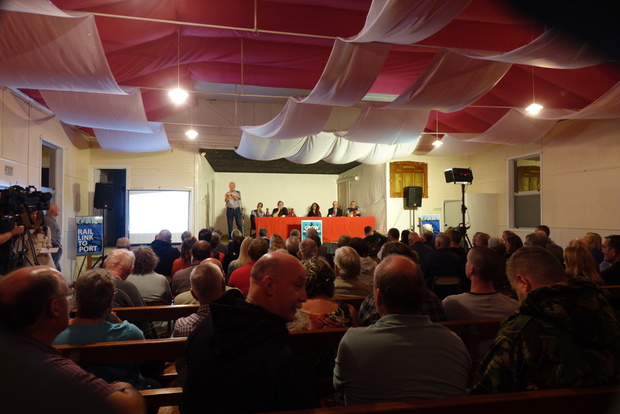 "How did it come to this?" asked one angry ex-truckdriver. " The council knew the forest would be harvested about now. How come they never planned for it or aligned the road to cope?"

In recent years, pine forests all over Northland have reached maturity and felling has intensified.

More than two million tonnes of logs a year have to get to Northport, the deepwater port at Marsden Point, and most of them get there by truck.

Rail union workers said before Whangarei's port moved from the inner harbour to the Point 14 years ago much of the region's freight, mainly logs and milk powder, went to the port by rail.

But the new port was built without a link to the railway line that runs from Otiria near Kaikohe, to Whangarei and on to Auckland. And in the meantime Northland forests have matured.

Last month, KiwRail announced trains would no longer run on the line from Otiria to Kauri, just north of Whangarei.

It couldn't get the price it wanted from the only customer left on that line, the Marusumi woodchip mill at Portland, south of Whangarei.

KiwiRail's assets manager Dave Gordon said the old wagons used for that contract are past their use-by date and the cost of replacing them proved too high.

"Marusumi declined to renew the contract," he said. "There are costs associated with fixing those wagons; they're the only type of that wagon we have in the country, so effectively Marusumi was the only customer, so that's where it ended."

KiwiRail used the same rationale when it stopped running log trains on the line from Whangarei to Dargaville a couple of years ago.

A big storm and slips damaged the line, and the company said it couldn't justify the cost of repairs given the meagre revenue it generated.

But the latest announcement, that the line north of Kauri near Whangarei will no longer carry trains come August, has sparked a public outcry.

A new lobby group, Grow Northland Rail, has sprung up and it's struck a chord with the public. 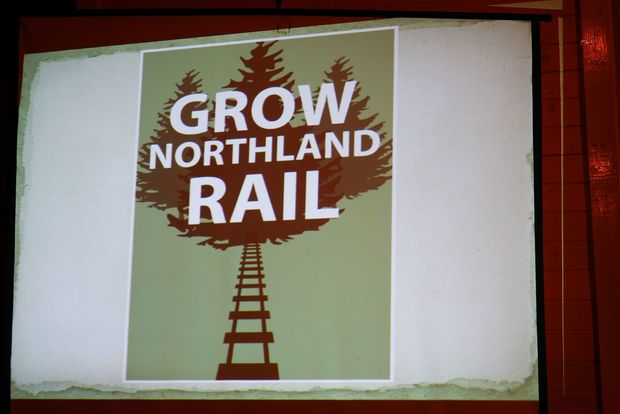 More than 300 people packed a public meeting on the future of rail in Whangarei last month.

"Everywhere you go, you get support. In my local rugby club three weeks ago I had 19 farmers come up to me and say  'Good  on you - I remember when rail used to work well here and I think we should be putting more on rail'."

Mr Craw said rail was a strategic asset in the north. In major floods two years ago, state highways were closed but rail could still function.

"At the moment this government seems hellbent on closing down rail,"  he said.

But Economic Development Minister Steven Joyce said that was not the case.

"We've spent a massive amount on rail, more than any government in living memory," he said.

"Something like around $4 billion, with the KiwiRail turnaround plan and subsequent investments, commuter rail and a whole range of other things and many people think that's a sunk investment. I happen to think it's a worthwhile investment for maintaining the network."

But Grow Rail said the network in Northland is dying of neglect. While Mr Joyce said the lack of demand for rail freight was behind the latest mothballing, Grow Rail said KiwiRail has not tried hard enough to find customers.

Jack Craw said the group knows of five businesses in the north who would use rail freight if they could. But he said the one investment the government seems loathe to make in the north is a rail link to the port. 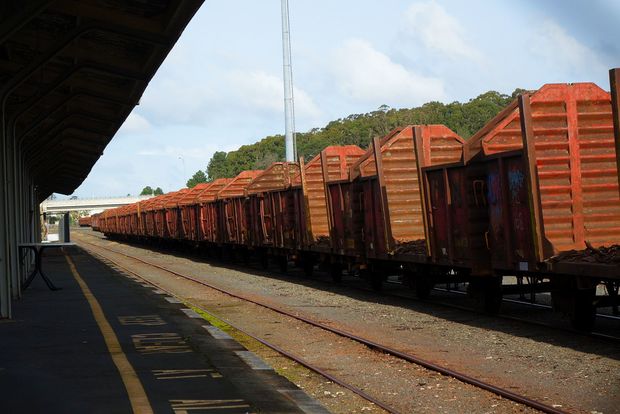 Although the Northland Regional Council, the part-owner of the port, spent $10 million on property for a rail corridor from Oakleigh to Northport, it's now firmly behind the government's push for bigger and better roads between Whangarei and Auckland. Photo: RNZ/Lois Williams

Council chairperson Bill Shepherd, said that was because 2 percent of the region's freight was transported by rail.

"That means the other 98 percent goes by road. So the current council is focusing on getting the roads dealt to. There may well be a future for rail at some point, but if we were to focus on it now the figures are quite mind-boggling."

KiwiRail's Dave Gordon said making the line from Otiria to Auckland truly fit for modern-day purposes, and building a line to Northport, would cost about $900 million.

Rail advocates say it's a Catch 22. No one's using rail, they argue, because it's been run down. The Northland line can't take containers; the bridges and culverts need replacing and in many places the trains can only travel safely at 5km/h.

The Better Transport Forum said the government is about to spend close to a billion dollars extending the northern motorway from Puhoi to Warkworth, a distance of about 20km.

Forum spokesman Jon Reeves said no one was counting the social costs of roads and trucks, such as the rising accident rate, or the 300 kauri trees that will have to be felled for the new highway.

Forestry companies in Northland said even if the Northland lines were modernised, and a link built to the port, trucking the logs would still be cheaper overall because of the distance between the various forests and the only two rail heads at Otiria and Dargaville.

And it wouldn't help the cowering residents of Otaika Valley Road. The trucks rattling past their homes come from forests nowhere near a railhead.

Jon Lammers said all he and his neighbours can do is plead with the authorities to lower the speed limit and force the truckies to slow down.

The Transport Agency is expected to take ownership of the road in July, when it will be designated as state highway, along with Mangakahia Road.

The agency's Northland director Ernst Zollner said he'll be assessing the problem closely and a speed reduction was just one of several ways the road could be made safer, and quieter, for the long-suffering residents.