It's almost five years since the Canterbury earthquake that claimed 185 lives and caused widespread damage throughout the region. How far along is the rebuild?

Canterbury Employers' Chamber of Commerce chief executive Peter Townsend says 2016 will be the year Christchurch exceeds 50 percent of the reconstruction of the city.

Mr Townsend said $100 million a week will continue to be spent in the city for some years to come but acknowledged people are getting frustrated that the rebuild is taking a long time. He believes, however, that people are beginning to understand the complexities involved.

Click on the tiles below to see the progress being made in Christchurch: 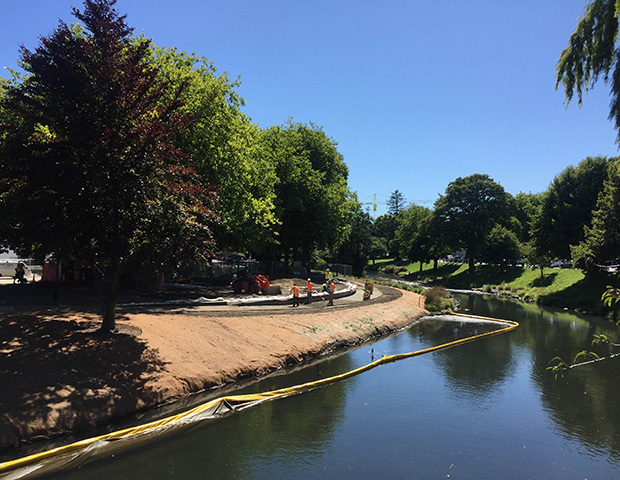 The sod turning for the $11 million memorial, between Montreal Street on the corner of Oxford Terrace, and Durham Street South, in central Christchurch, took place in November. The 150m long wall will be inscribed with the names of the 185 people who died and is due to be officially dedicated on the sixth anniversary of the quake in 2017. 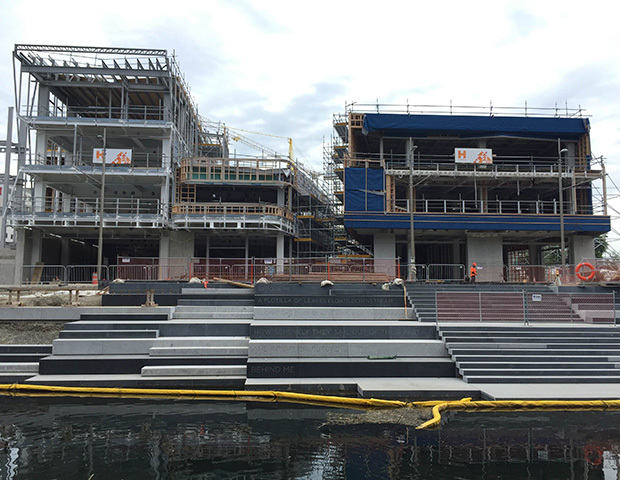 The $140 million development will include bars, restaurants, offices, and its own container mall. It’s opening date has changed several times and is now expected to open near the end of 2016. 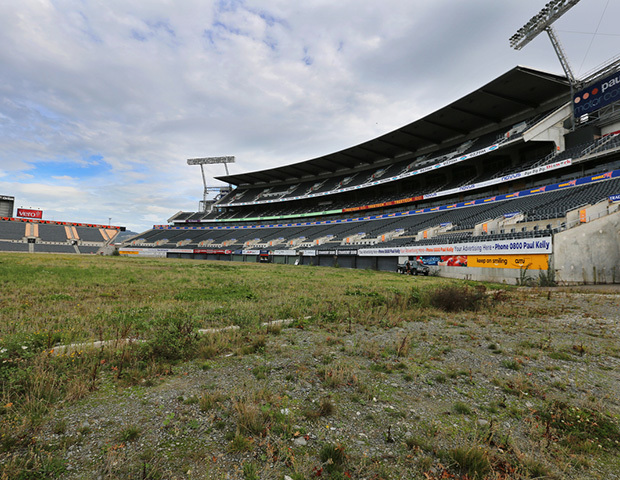 Was due to host games during the 2011 RWC but quake damage made the stadium unusable. The Christchurch City Council is expected to decide on its fate after a major insurance settlement was reached in December. 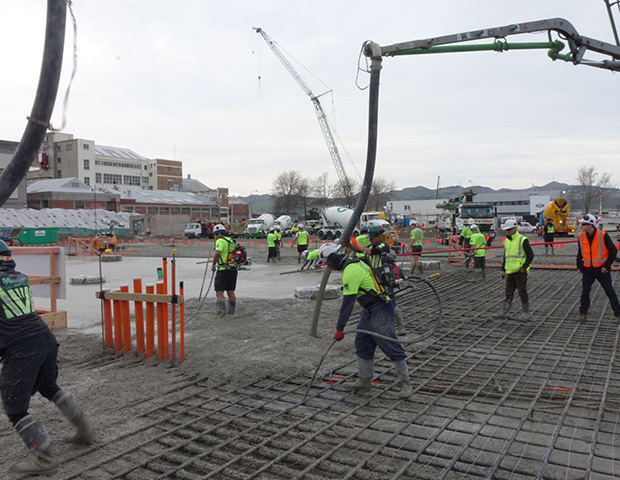 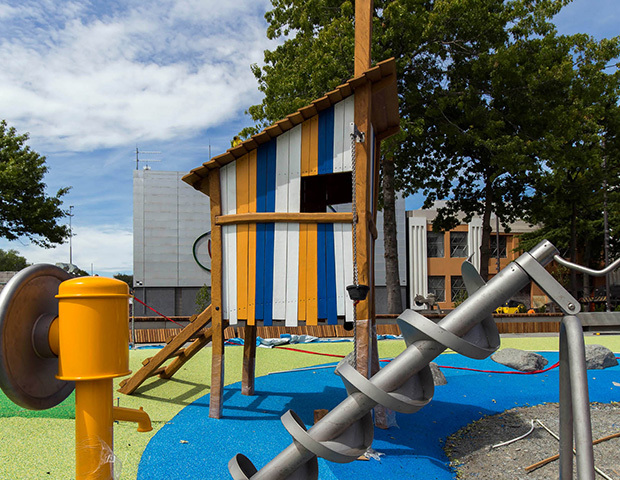 Set on a lone hectare block in the central city, the $20 million playground was opened in December. The cost included earthworks, landscaping for the entire block–of which the playground takes up about one-third–and the installation of the playground’s equipment. The playground itself cost $3 million. 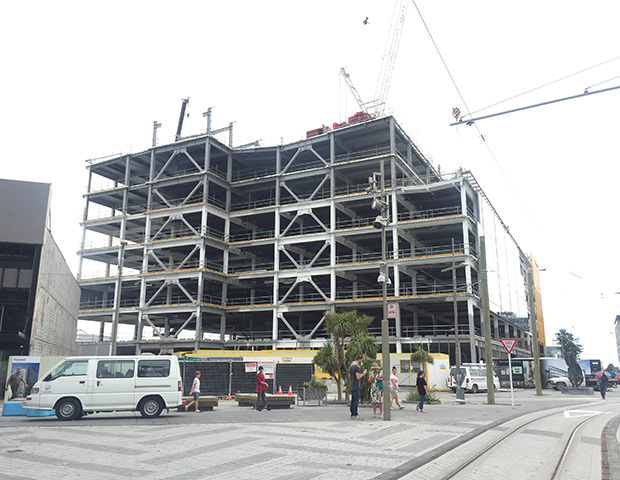 Civil servants returning to the city

1100 government staff members expected to return to the city by the end of 2016. The Ministry of Business, Innovation and Employment will be one of the biggest departments to move into the CBD, sharing the 8,200sm Grand Central building with the Ministry of Social Development and Department of Conservation. 200 Inland Revenue staff are already working in the CBD above the iconic Ballantynes department store. The first stage of the BNZ Centre, between Cashel and Hereford Streets, will initially accommodate about 380 workers from nine different Government agencies or Crown entities across three floors of the building. 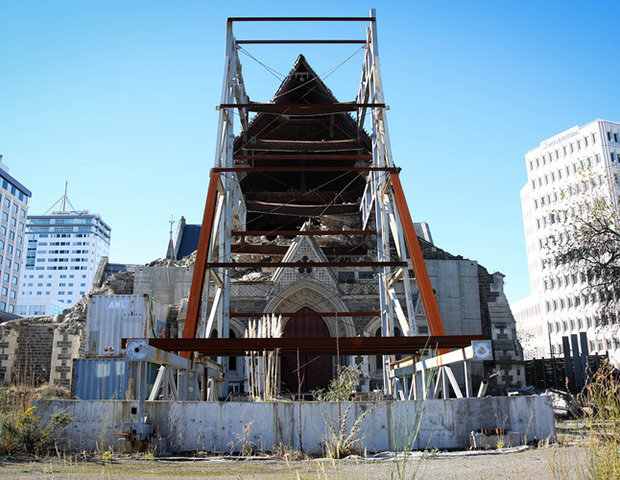 After a long running legal saga between the church and a group against the quake-damaged church’s demolition a government appointed mediator was brought in to resolve the standoff. A report released in December found that cost was the main factor on whether the church could be restored in its original form. The Anglican Diocese is expected to make further announcements in April. 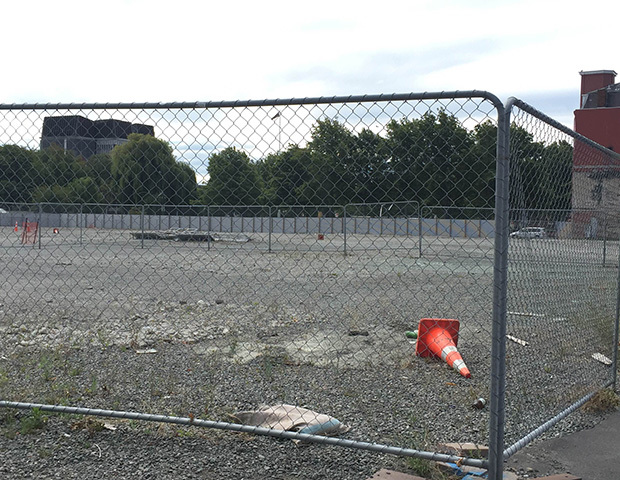 Uncertainty surrounds this anchor project after the Prime Minister in July said it could be scaled down. In May the Government pushed the project’s completion date from 2017 to the end of 2018 but the government has said it is unlikely to meet that new deadline. 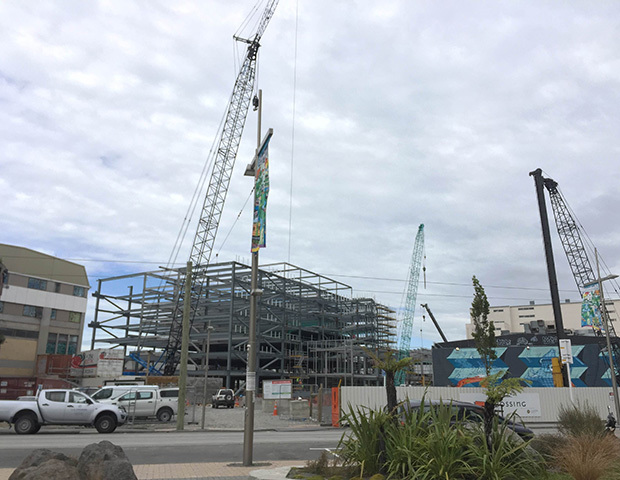 A $140 million precinct called is one of several big developments under construction in the central city. The precinct will include shops, offices, cafes, bars and carparking around a network of laneways and airbridges. Christchurch’s wealthiest man, Philip Carter, is behind the plan. It will occupy new and heritage buildings on over a hectare of land between Cashel, Colombo, Lichfield and High street and is due to open in October. 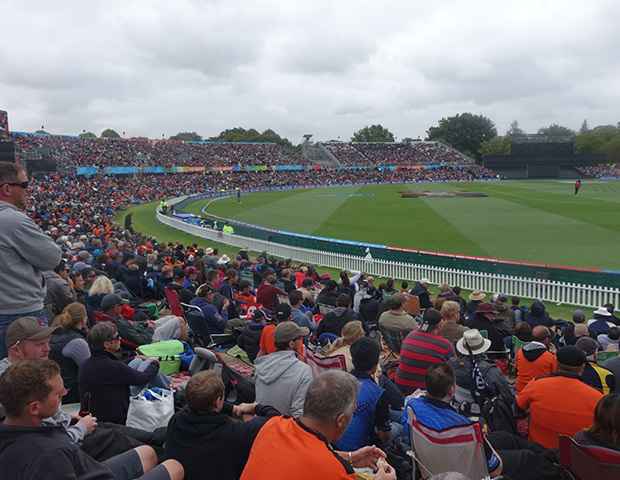 The extension of the existing cricket ground was a feature of the city’s Blueprint and after a lengthy and costly legal battle it was able to be upgraded in order to host the CWC in 2015. 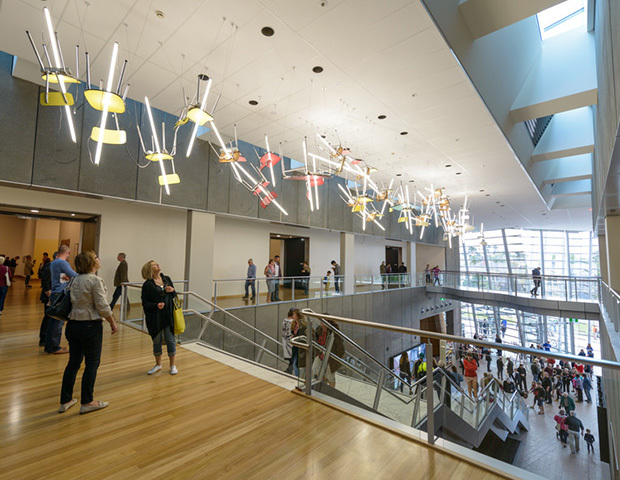 Officially opened to the public in December 2015. It was the civil defence base immediately after the February quake before inspectors declared it unsafe and it closed for extensive repairs. 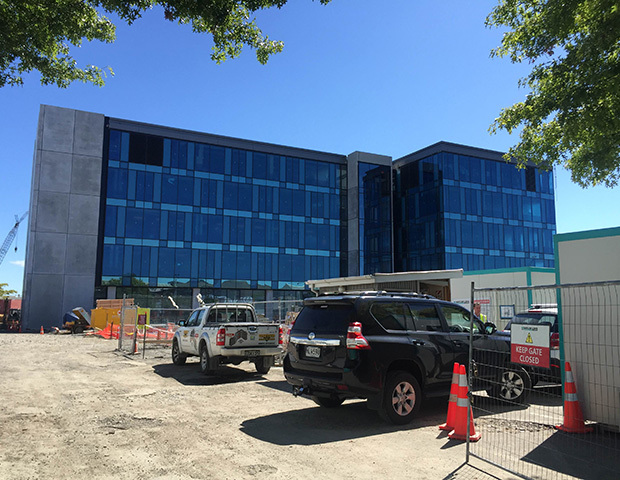 More than 400 staff are expected to move into the $50 million central city office block on Tuam Street, in April. The site will accommodate council and community group meetings and is located across the road from the Bus Interchange. Staff have spent the past four years working in eight different offices around the region. 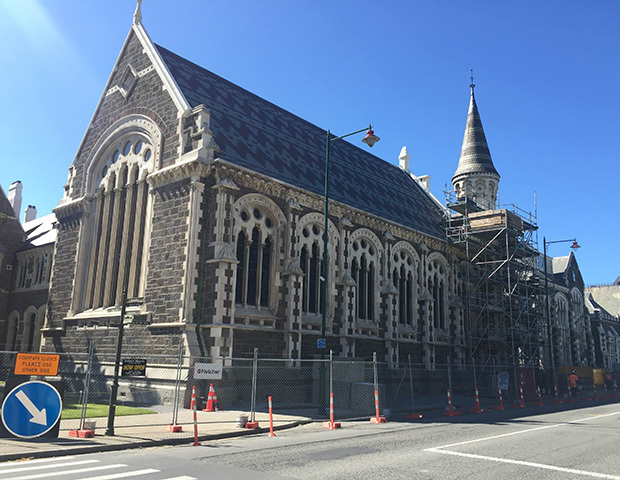 Nearly half of Christchurch’s earthquake-damaged Arts Centre is expected to be open by the end of the year. The historic stone precinct has 23 buildings, including the Clock Tower, Great Hall, Library and Rutherford’s Den. The restoration project is expected to cost $290 million.

Mr Townsend thinks Christchurch will go down in history as being hopelessly optimisitic about rebuild timeframes in the early days after the earthquake.

Christchurch Central Business Association manager Lisa Goodman, said accessibility has been one of the key problems for people in the central city and now as the city begins to take shape, car parking is an issue.

"In the next 12 to 18 months we'll have 20,000 coming into work in the central city and that will make a tremendous difference, not just during the week but when they're at home they know what's on offer in town.''

She said businesses need certainty over the Christchurch Cathedral and the convention centre to create development in the square. 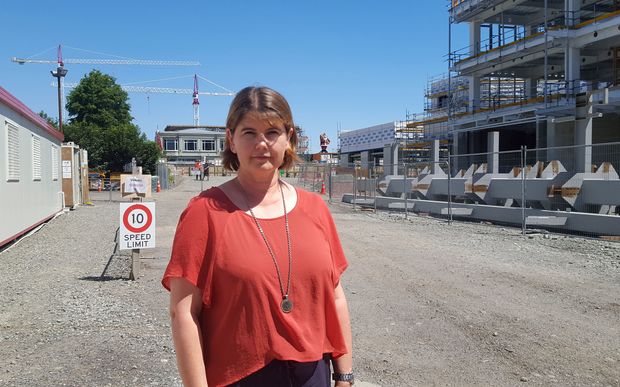 Labour's Canterbury Earthquake spokesperson and Wigram MP Megan Woods said while there are positive things happening in the city she describes the anchor project sites in the city as wastelands.

In December the $3 million Margaret Mahy Family Playground in Christchurch's central city opened, one of the few completed anchor projects in the city.

The playground was one of more than 100,000 suggestions that came out of the Share an Idea campaign run by the Christchurch City Council soon after the earthquakes.

The ideas were a starting point for the council's central city plan but they were superceded by the government's recovery blueprint, which was intended to be a framework for businesses and green spaces around the city.

The blueprint, which laid out where the anchor projects like the justice precinct, convention centre and sports facility would be, was intended to give developers, investors and residents certainty as the city continued to reel with aftershocks.

Last year the council voted to go ahead with selling $750m worth of council-owned assets and voted to raise rates over the next four years by more than 27 percent.

In December, the Council finally settled it's quake insurance claim for $635 million. The settlement, due to be paid in full next month, will give the council flexibility on its own repair programme.

Christchurch Mayor Lianne Dalziel describes the council as being back in the drivers seat but there are still challenges ahead this year, including a refresh of the blueprint and producing an annual plan that is deliverable. 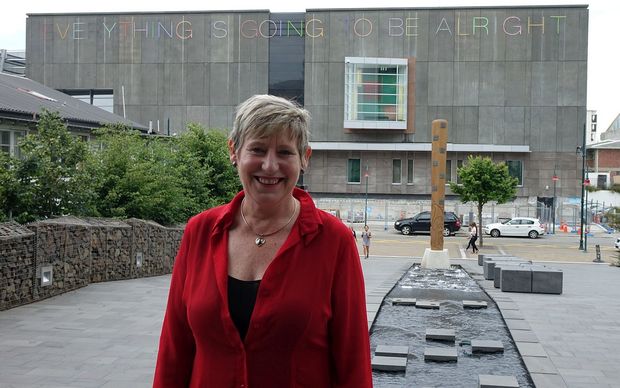 Minister of Canterbury Earthquake Recovery Gerry Brownlee says initial advice about the recovery of the city was bleak and he is pleased with how the city has recovered.

He describes a Treasury report, released in November which said the government's central city recovery plan was unachievable, as ill considered and backward looking.

He also dismisses suggestions that 2016 is the midway point of the rebuild.

"I've always been a skeptic about timelines and I think when you start talking about `are we this far through?' it becomes slightly academic and it depends on what your estimate was of the damage in the first place.''

As Minister of the Earthquake Commission (EQC), Mr Brownlee has frequently found himself defending the work of the Commission's staff as they continue to handle home owner claims.

Almost 70,000 houses needed repair after the earthquakes, about 5500 homes are being reinspected by EQC for second rounds of repairs because of poor workmanship, failed or incorrect repair strategies, and new damage, with about 2300 underfloor repairs needing reinspection or fixing.

Head of the Earthquake Commission Ian Simpson apologises for those mistakes and says they will be put right.

Mr Simpson said from a housing point of view Christchurch has recovered far more quickly than other world cities that had faced comparable events. The Commission has paid out more than $8.9b in claims and repairs he said.

The home repair programme has cost over $3b, the Commission is now dealing with the last 12 or 1200 or 1300 homes, with 700 already under repair and 500 people the Commission is trying to settle agreements with so they can start work.

Mr Simpson said this year the Commission needs to push hard to make sure anyone waiting for the EQC to do something, gets it done.