A shrine has been set up at the wrecked disaster prevention tower for people in Minamisanriku to pay their respects.The tower had  43 people on the rooftop who were washed awa. Nine survived, including the mayor who hung to a radio antennae. (Photo: Cushla Norman).

More than three years after a massive tremor struck off the coast of Japan, the rubble has been cleared and the infrastructure largely restored.

But despite the progress in the last few years,  nearly 260 -thousand people across the Tohoku region are still living in temporary housing, with friends or family or renting.

Expensive building materials, the price of land and now competition for labour from Tokyo, the Olympic host in 2020, are all being blamed for the lack of progress.

After checking in with Christchurch,  Insight this week follows former Radio NZ journalist, Cushla Norman, as she visits one of the towns hardest hit by the tsunami,  Minamisanriku, to find out how its rebuild is progressing and how the people are coping. 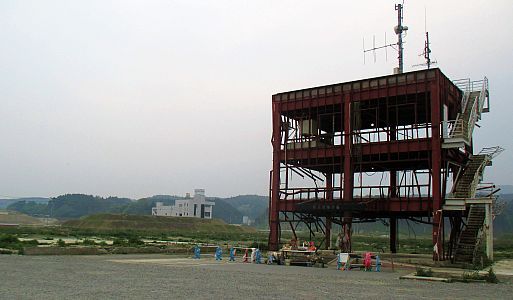 The Disaster Prevention Tower ,and Wedding Hall in the background, the only structures left standing in Minamisanriku (Photo Cushla Norman)