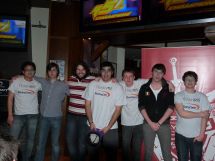 As more and more teenage boys retreat into the virtual world of fantasy games on the internet, their parents and teachers are becoming increasingly worried about how it's affecting their reality.

Many say boys are spending every waking and sleeping hour playing or thinking about online games, with some skipping school to stay plugged into their virtual lives.

But, gamers argue there's no difference between this and obsessing over any other hobby, especially now as internet gaming starts to mimic sport with the rise in professional teams, sponsorship and international tournaments.

Teresa Cowie looks at whether its just another wave of moral panic over advancing technology or if it could cause major problems down the track.