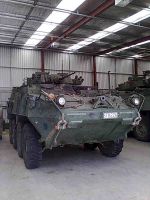 The Government is busy mapping out what the Defence Force will be doing for the next 25 years.

A White Paper is about to be released which will define where troops might be expected to be sent and what equipment they will need.

After a decade of non-stop overseas deployments and mercy missions in the Pacific, Gareth Thomas looks at what lies ahead for the military.

With China's re-emergence as a superpower he asks whether New Zealand needs to forge a new military alliance?

Photo: One of the army's Light Armoured Vehicles, now deemed surplus to requirements.