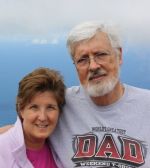 Forty-one thousand people in New Zealand have dementia, and that number is set to double over the next 20 years as a result of an aging population.

The most common form of dementia is Alzheimer's disease - typified by memory loss, a growing inability to care for oneself and ultimately death.

But people with dementia say the stereo-typical image of a helpless, frail pensioner works against them, causing stigma and alienation.

In the first programme of a two-part series on dementia, Sue Ingram talks to those affected by the disease.

Photo: Richard Taylor, who has Alzheimers, and his wife, Linda.