Record producer Ben Edwards' bookings schedule has been solid in the last year or so, thanks to the rise of Marlon Williams, Aldous Harding, Tami Neilson and the whole Lyttelton alt-country scene. Kirsten Johnstone visits his recording studio in Lyttelton, to find out more about the producer/musician relationship.

Ben Edwards and musician Marlon Williams met when Williams' first band, The Unfaithful Ways, were recording their first EP, and using The Sitting Room - a studio run by Edwards - as a rehearsal space.

Since those first sessions, the pair has worked on an album by The Unfaithful Ways, a set of bluegrass music and three collaborative albums with Delaney Davidson. They've co-produced Aldous Harding’s debut, and worked on Tami Neilson's albums and Marlon’s own album. They’ve spent thousands of hours, perhaps tens of thousands of hours in the studio together. Are they sick of each other yet?

“You get sick of EVERYTHING," Williams says. “Tables annoy me. Every aspect of your world starts to appall you.”

Edwards has a more measured response. “There’s times when you annoy each other, you butt heads a bit, that’s normal, and I like that. Part of the whole process is working through that.”

It’s clear that the pair are close comrades. And they’ve been through a lot together in the past five years, in what has been an emotional and uncertain time for Canterbury people, post-earthquakes.

And music can bring things to the surface in a pretty strong way. “There hasn’t been a single album that I’ve ever recorded, that there hasn’t been someone vomit or cry," Edwards says.

“It’s so intense, it’s such a purging process, my job is just to make them [the musicians] feel comfortable." 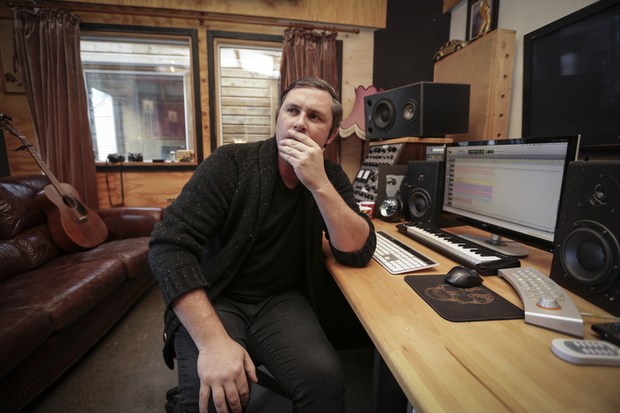 Edwards says he’s definitely been typecast as an alt-country producer. “If my 17-year-old self met me now, and listened to the stuff I’m doing, I’d get punched in the face.”

Growing up more of a shoegaze, electric-guitar-band fan, he says he’s learned all he knows about country music from the musicians he’s worked with.

Business is booming for him, with studio bookings coming not only from within New Zealand but internationally as well.

“I’m probably the luckiest person in New Zealand, if not the world.”