Wellington musician Grayson Gilmour is ready to set loose his 8th solo release, 'The Otherness' on Flying Nun in July. For our occasional video series Headquarters, Kirsten Johnstone visits Grayson's attic-space studio for a live performance and to find out about the tools of his trade.

At 32, Grayson Gilmour reckons he’s the most confident about everything he’s ever been.

“As soon as I said ‘see ya later’ to my 20s, it’s like a whole different chapter of my life opened up.” The first single from his new album The Otherness riffs on this sentiment, inspired also by a quote from an architectural treatise by Hundertwasser: “The straight line is godless and immoral.”

Gilmour has been releasing albums since he was 16, in 2002, and this will be his

eighth solo release. He’s also done albums with his now mostly defunct band So So Modern, and has won awards for his film scores.

His home studio in Mount Victoria is a visual and aural feast. A collection of miniature pianos, a set of candy coloured desk bells, rows of vintage synths, bollywood film soundtracks on cassette, inspiring books on sound and architecture, a vibraphone and marimba, guitars and pedals. It’s surprising he gets any work done, with the overwhelming array of tools to choose from.

“ I do write a lot of stuff out of happy accidents with noises. But yes, a bit of restraint is needed when you’ve got a lot of things to toy around with.”

He shows Kirsten Johnstone around, and delves into some of his composing practises. 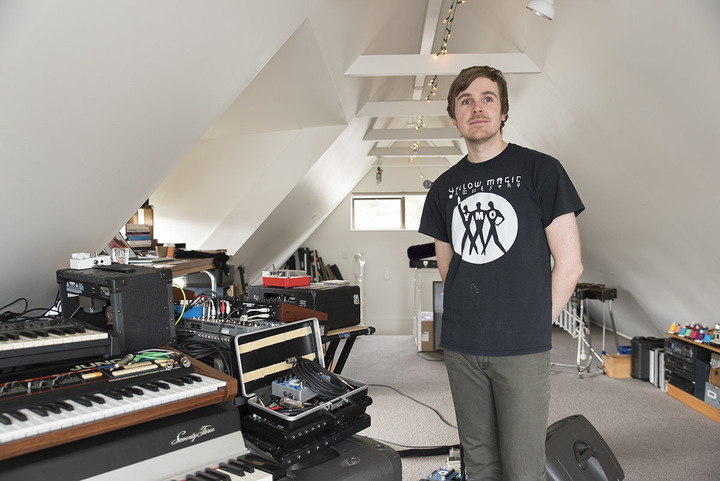