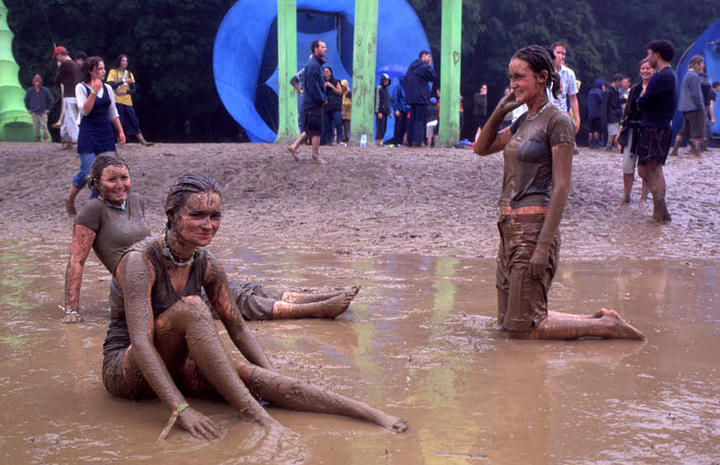 Twenty years ago, at the turn of the millennium, around 15,000 people gathered at the top of a mountain to dance. I was one of them.

Around half had bought forged tickets or climbed up through the bush to get in. The Gathering was an alcohol-free event, but most came with a stash of illicit substances.

And then, it rained. A lot.

The first Gathering was in 1996, a break-off from pioneering NZ outdoor dance party Entrain, which had been going since 1992, inspired by festivals in Europe and Goa.

Murray Kingi, Mel Rutherford-Dower, Tim Owens, Grant Smithies and Jose Cachemaille saw the opportunity to bring the fractured sub-genres of dance music together for one festival with high production values.

They'd caught the zeitgeist – electronic dance music was growing exponentially in popularity; raves were popping up in provincial centres. But there hadn’t been a festival that had brought trance, drum 'n' bass, dub, ambient and happy hardcore together in the same festival. Kids came from all over the country to party at The Gathering, and it became a massively important part of the musical eco-system of the time.

"It really felt like a coming together,” says Tiki Taane, who was playing with Salmonella Dub at the time. 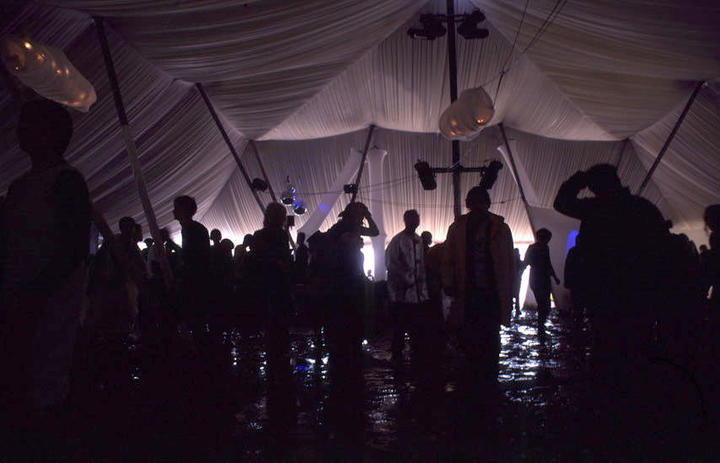 Inside one of the dance tents. Photo: Johnnie Halstead

The Gathering was held at Canaan Downs/Pīkikirunga on the top of Takaka Hill near Nelson. The only road in was narrow and windy, but once you were there, the beech forest surrounding the paddocks was idyllic, the lime-stone landscape perfect for exploring in between dances. Māori legend says that the scales of a Taniwha are embedded in that land.

“It's special up at Canaan Downs” says Tiki.

“There's a magical wairua up there. It's raw, it's rugged, but it's also got an intense but beautiful energy.”

In the lead-up to the turn of the millennium there was global anxiety over the Y2K bug – that our computers would stop working, and that it might cause missiles to drop out of the sky, or rip out the fabric of our entire economic system.

And while the EFTPOS did crash for a little while at the Gathering festival, it wasn’t the only worry.

There had been persistent rumours that a white supremacist group were planning a massacre of Gatherers at midnight. Organisers and police, taking the threat seriously, had the NZ SIS search the entire area for guns a couple of days before, but they didn’t find anything.

“It was just troublemaking by a group called The Fourth Reich, from Westport.”

They were bad news, but they probably weren’t coming to The Gathering. 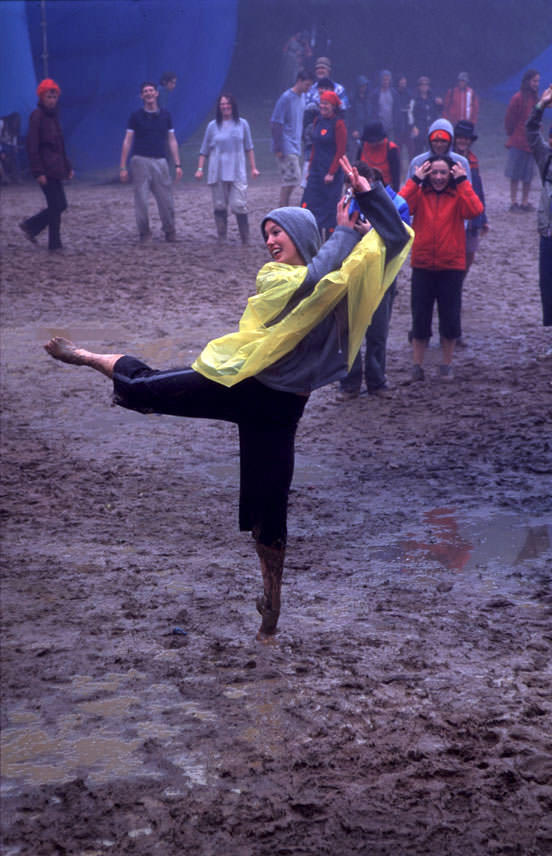 Dancing in the mud at The Gathering 2000. Photo: Johnnie Halstead

In the end though, the worst thing was the torrential rain, which started 10 minutes before the crew opened the gates, and didn’t let up until it was over.

“And that really set the cat among the pigeons,” says Murray Kingi, who was one of the people in charge that year.

Police ordered organisers to let everybody in, ticketed or not, in an attempt to clear the road.

With double the expected audience on site there was a strain on the infrastructure; food, water, and portaloos. Under-dressed kids were getting wet, and cold, and though there were heaters in some tents, some people needed to be taken to town to be warmed up.

People's tents became surrounded by water, some with small rivers running through them. There was mud up to people's knees and several got right in among it and got covered from head to toe. Sound gear was being submerged, and becoming dangerous for performers. But health and safety wasn’t what it is now, so the show went on.

“There was one point just before midnight, where I had to make the decision whether to carry on or not,” says Kingi.

“And I had pretty much half the crew yelling at me to stop this madness. And we had the other half telling me ‘You can't stop this’.

"So I had to make the decision. And I just went, I think if we stopped it right now, we're going to have a panic to get off this hill, [down a] single lane gravel road. 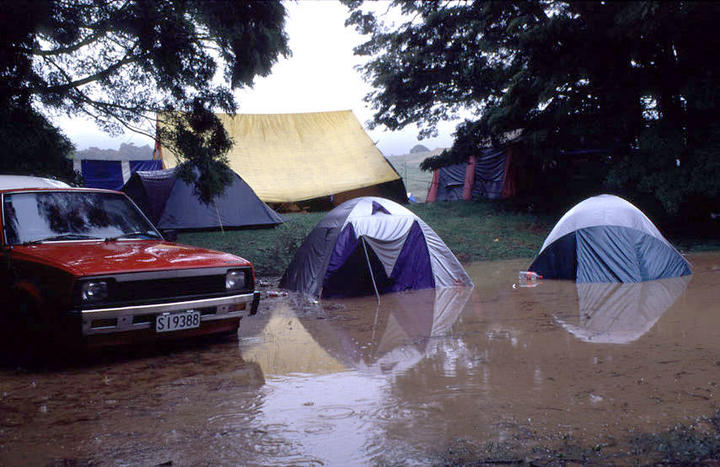 With Salmonella Dub playing the 11pm set, a special karakia and waiata for the New Year, and banging beats all night long, it was an incredible party. And as long as you didn’t stop dancing, you stayed warm.

People had synchronised their watches for the countdown, but the timer on the DJ booth was malfunctioning.

On the morning of 1 January 2000, there was a rumour the organisers were about to shut the road. Eight-thousand people began driving slowly down the hill, along 8km of single-lane mud-slicked road.

"I delayed the millenium by about five or six minutes because we weren't ready," Kingi said.

"Then once it started, it was everything I hoped it would be."

Thankfully this isn’t a disaster story. No-one died, nothing collapsed, there was no violence.

There were some sprained ankles and a broken leg and someone, whose hair caught fire when they were trying to keep warm, suffered severe burns. Cars had nearly gone off the cliff on the way up and down.

There was no way for a helicopter to land, had anything really serious gone on. 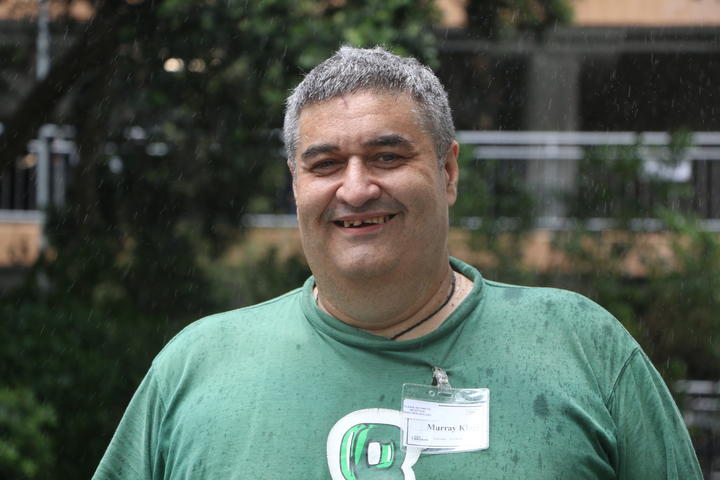 After surveying the carnage to the land, the mud covering the speaker stacks, and tallying up the lost gear, the organisers decided The Gathering would not be held at Canaan Downs on Takaka Hill again. It limped on for two more years down on the flats of Golden Bay, suffering huge financial losses. But eventually Murray Kingi had to put the company into liquidation.

The Gathering was a formative event for some of us, or at least something we looked forward to every year.

“It was special, it was a certain type of zenith that happened,” says Sam Trevethick, who’d just formed Shapeshifter, one of our most successful dance music acts.

From the earliest moments in human history, people have gathered together to dance. To celebrate, to court, to worship, to mourn. The Gathering up on Takaka Hill that year was definitely one of those moments.