The Only Way to Pay? 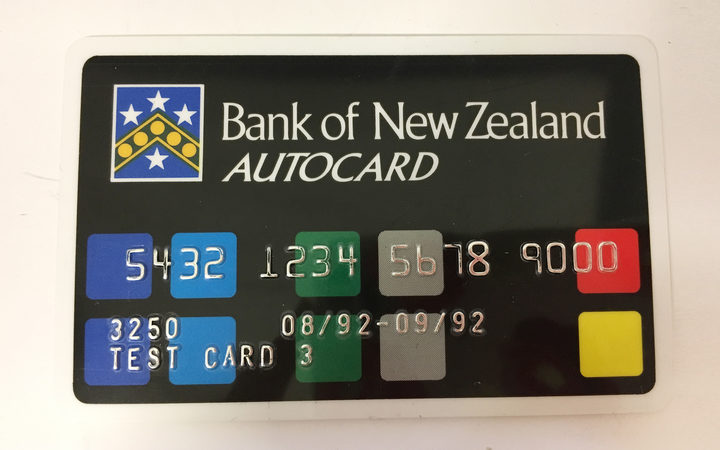 A few years back, a Kiwi actor flew out to Shanghai to film a TV ad.

The shoot would only take a few days but he told his friends to expect him back in about a month. He had never been to China before and wanted to have a good look around.  Fair enough.

So his mates were a bit surprised when he arrived home just a week later.

What happened, they asked, we thought you were staying longer?

“Oh yeah,” the actor replied, “yeah, I meant to. But it’s the weirdest thing. Do you know they don’t take Taranaki Savings Bank EFTPOS cards in China?”

For more than 30 years, electronic banking and especially EFTPOS have been the way we pay here in New Zealand. I truly can’t remember the last time I carried cash or paid for something but didn’t swipe a card to do it. 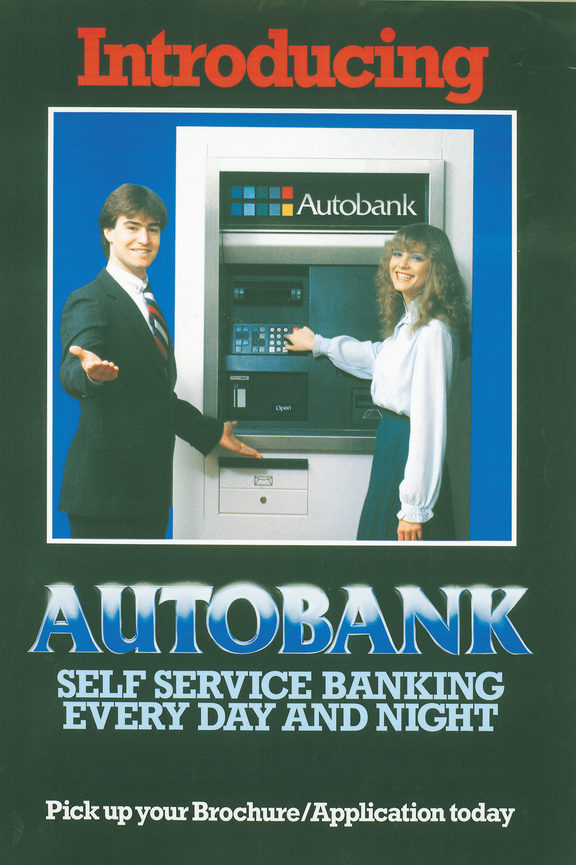 If you open your wallet, purse or what have you right now, I’ll bet you find more bank cards than cash in there. Unless you’re Professor David Tripe, Massey University’s head of banking studies.

How many bank cards?

Or you might be tech expert and PR guy Paul Brislen, who forgot to bring his wallet to our interview.

“Yes, and I drove here, without my licence so now I’m in trouble with the law.”

Cards on the table (so to speak) - Paul Brislen does do PR work for Paymark, which controls around 75% of all EFTPOS transactions in this country. But the opinions here are his own, he promises.

In case you're not old enough to remember, back in 1984, when people went shopping for a new synthesiser, some legwarmers or a can of hairspray (“now with extra CFCs!”) they didn’t pay for them with an EFTPOS card. More often than not, they used cash.

A few people had direct salary credits but a lot of us still got our wages in cash in a brown envelope. We’d set aside enough for the week, then, in our lunch break, go to the bank with our savings book and deposit the remainder.

If you ran short over the weekend, when the banks were closed, your only option was to write a cheque, but banks and retailers didn’t like that very much. Cheques took a few days to clear, and during that time you could make a mistake with your bank balance and your cheque would bounce.

Of course, sometimes it wasn’t a mistake.

Credit cards had been here since 1979 and Automatic telling machines, or ATMs or holes in the wall as they were known, since the early 80’s. ATMs were great, but carrying cash meant you could be robbed and of course if you lost your money – tough.

As the reforms of the '80s rolled on and weekend shopping and dining became more of a thing, we needed an alternative to the cash economy. We wanted to be able to access our money when we needed it. We wanted a revolution, man. 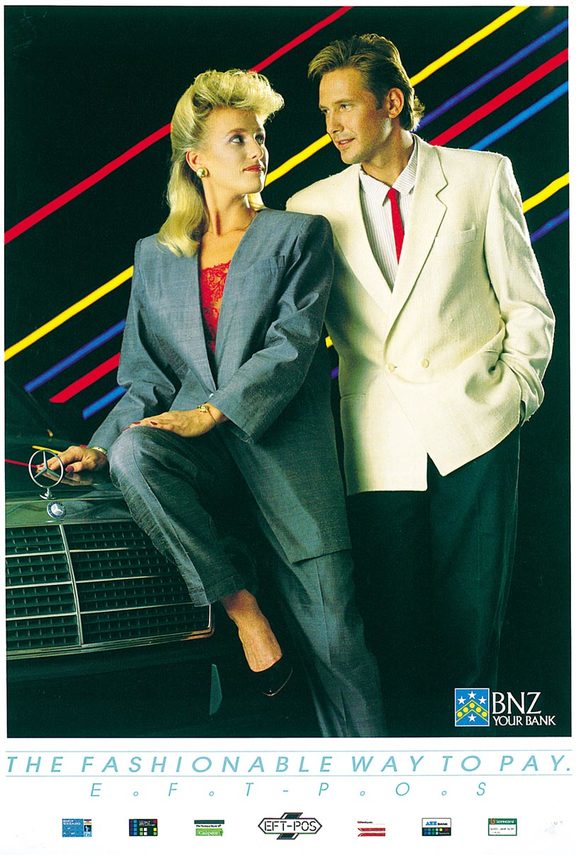 And we got it. After a fashion.

EFTPOS technology was developed first in the United States; it was introduced here in late 1984. David Tripe was working for National Bank alongside the team that rolled out EFTPOS across the country, in service stations and then shops.

It was a success, he says, because it was cheap for retailers who were only charged a low monthly rental on the terminals; in other countries, they were charged a percentage of transactions. And of course, EFTPOS was free for customers.

“The banks were keen to get rid of cheque volume and by making EFTPOS free that was a good basis for encouraging people to make payments electronically rather than using cheques.”

But EFTPOS wasn’t free for the banks. Each transaction cost around $5, a sore spot that would later become an open wound.

1984 was pretty early on in the EFTPOS story, but despite what a lot of people believe, we weren’t the first country to get it. Australia had introduced the technology a year earlier and Americans had been using it in a limited fashion since 1982. But if we weren’t the first, we were definitely one of the keenest.

“I think it’s fair to say that New Zealand led the world for a long time in terms of uptake, in terms of customer demand, ahead of pretty much everyone else,” confirms David Tripe.

But less than four years after its debut here, EFTPOS was in big trouble.

In 1988, BNZ pulled out of the system, citing high costs and a disappointing uptake of the technology. EFTPOS availability had expanded beyond petrol stations to large liquor stores and supermarkets, but it was hardly widespread. You could only use specific bank cards with specific machines, meaning retailers sometimes needed to have two different EFTPOS terminals next to their tills. A BNZ spokesperson at the time said they were withdrawing because they “don’t believe we’ve got the recipe right.”

But later that year, Westpac and the National Bank teamed up to launch a new system, priced to please the banks and accepting almost all credit and debit cards from banks and financial groups.

By 1990, there were more than a million EFTPOS transactions every month.

A year later, BNZ came back into the fold. 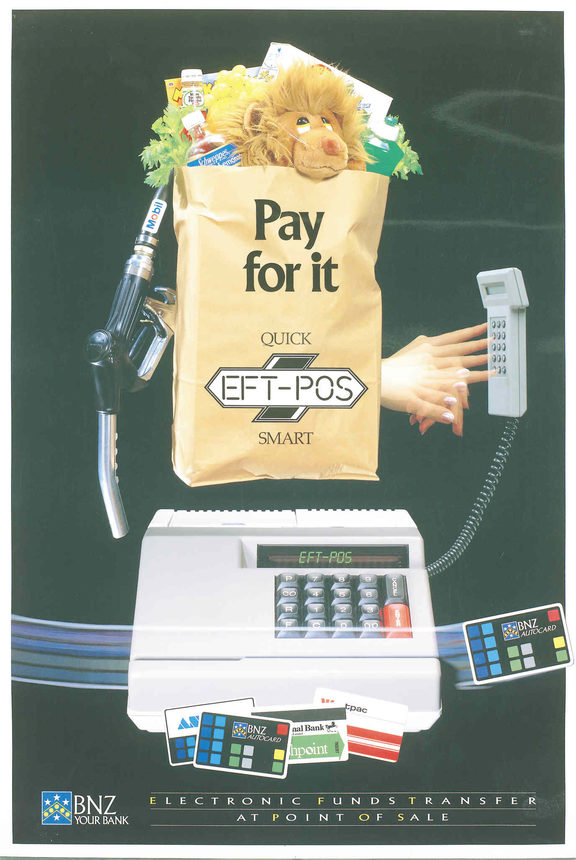 Kiwis were as keen as a bean on the technology all over again but still sometimes a bit clueless about the best way to use it. In the late 80’s, Paul Brislen remembers finding a lost wallet at a restaurant, filled with unsigned EFTPOS and credit cards. The owner, a bank manager, was indignant; of course he wouldn’t sign his cards! Then anyone could use them!

Inevitably, we lost our bank cards from time to time, or we wrote our pin numbers on them for anyone to see. I once discovered a lost card months after I’d cancelled it. I’d been using it as a bookmark.

Famously, there was that kid who added a million dollars to his account by depositing an empty Jaffa packet into an ATM.

That transaction was accepted by the machine, but the humans who saw it later felt differently.

So like every major innovation, the arrival of ATMs and EFTPOS had consequences, good and bad. When cash transactions went down, so did the appeal of robbing banks and restaurants. Banks themselves started holding less cash reserves.

“You can rob them all you like” remarks Paul Brislen. “All you’re going to steal is their stationery.”

But if there is less cash for baddies, there’s also less for goodies, like street charities, buskers and beggars.

“There was a thriving economy built on the shrapnel in your pockets. That’s all gone, “says Brislen.

The downside of ATMs, he argues, is the death of the bank branch and with them, the personal side of banking; a social aspect he sees as a powerful but misunderstood phenomenon.

“Even today you see communities rallying around whenever a bank branch is pulled out.”

From time to time power outages means the EFTPOS system goes down and various bank’s cards stop working. After the Auckland storm in April 2018, damage to cell phone towers meant terminals across the city stopped working.

ATMs can be skimmed and your account hacked. Plastic bank cards aren’t very recyclable, which is tricky, because there’s a lot of them around.

But none of this seems to be holding Kiwis back.

In 2014 alone, $62 billion worth of transactions were processed through the EFTPOS system.

In 2017, Payments NZ reported we made 337 card transactions per capita.

We've had more than 30 years of getting used to getting our money out from a hole in the wall or putting in your pin number at the corner dairy. This familiarity with electronic technology has changed all of us. Arguably, this daily interaction with a computer softened us up to accept the later arrival of the PC, the internet and the ubiquity of devices in our lives.

But the end of EFTPOS and ATMs must come some day so ... what’s next? Paying by phone? Paul Brislen thinks so, but David Tripe isn’t convinced.

“I’m not sure that will be the ultimate solution. It might be for five years but things will move on to something else.”

And as we've seen, no matter how clever the technology, human daftness will always find a way to undermine it.

“People seem very good at losing phones,” says Professor Tripe, dryly. “And if that became the basis for all payments...

"That’d be a little bit worrying, wouldn’t it?”