Poppy is a local feel-good film about a young car mechanic determined not to let her disability slow her down.

Simon Morris: The main selling point of Poppy is that she is actually a girl with something extra, an extra chromosome in fact.

But the other selling point is she's endearingly fearless and has no intention of letting her disability - or anything else - get in her way.

But if Poppy's determined to make the most of her opportunities, her pessimistic brother is the opposite.

Dave's drinking is getting worse, he gets bullied by his mates into doing freebie jobs for them, his business is failing. He's clearly got problems.

That's veteran actor Ken Blackburn, playing Uncle Fred, who seems to be just in the movie to offer sage advice and stand-in for Dave and Poppy's late parents, who died in a tragic car accident. Could this be the reason Dave's such a mess?

Meanwhile Poppy is getting on with her life. If Dave won't arrange her apprenticeship and start paying her what she's worth, well she can look further afield.

And she's also got her eye on an old school friend, Luke, with a view to…. Well, seeing where it goes, I suppose.

Poppy is clearly that much-maligned term, a "feel-good movie", which often means a rather elaborately plotted series of cute scenes, culminating in a climactic one where our hero or heroine achieve that impossible goal.

But more important than carefully contrived plotlines is we have to love Poppy the character right from the off. 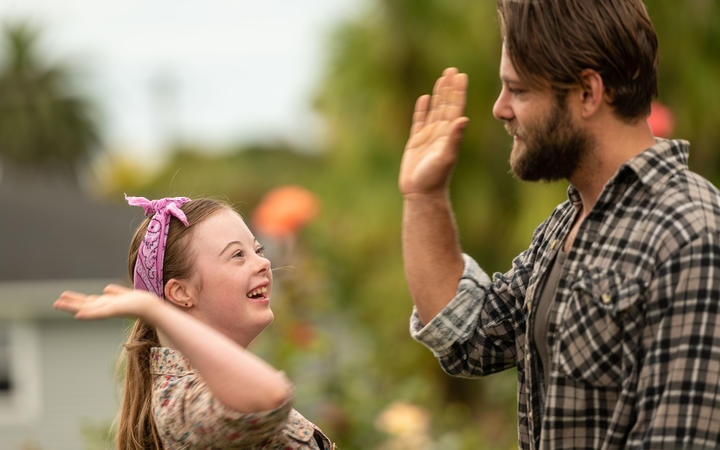 Actos Ari Boyland and Libby Hunsdale in a scene from 'Poppy' Photo: supplied

The film benefits enormously from the casting of Libby Hunsdale. Like Poppy, Libby's a firecracker, with a remarkable range, beautifully guided by director and writer Linda Niccol.

You may occasionally feel that Poppy is having a rather easier time in the film than she might have had in real life, but Libby's bubbly performance and endless enthusiasm go a long way to convincing us.

There's good support work too, including Seb Hunter as Luke - Poppy's potential new boyfriend - who gives her warmth and helps lift her from a worthy, good cause to an actual living character.

And Ari Boyland as Dave does a similar job from the other direction. Is he protecting his kid sister or stopping her make a life for herself?

At the heart of Poppy is the world of competitive burnout driving. I have to say that the scoring system and picking the winners and losers remained as mysterious to me as when I went in.

But Poppy is undeniably upbeat, its heart is in the right place, the songs - written and recorded by Seb Hunter - are terrific, and above all, it's a showcase for a brand-new star.

Libby Hunsdale won me over in the very first shot, dancing in front of the mirror in a bridal veil. But she seemed capable of doing anything: car stunts, long emotional scenes, jokes - lots of jokes - and holding our attention for an hour and a half. Poppy is well worth chasing up.