The New Zealand documentary Merata: How Mum Decolonised the Screen lays it all out in the title.

It's a tribute to the fiercely committed film-maker Merata Mita by her son Hepi – and it makes very few attempts to sugar-coat Mita's life or her message.

Film-maker and activist Merata Mita never expected anyone to give her anything.

The way she told it, she did it all herself – along the way becoming the first Māori woman director, and blazing a trail for indigenous film-makers around the world.

That's the story told in the film Merata: How Mum Decolonised the Screen, directed by her son Hepi Mita.

Nine years after her death, Merata's footprint is still all over this film – and not just because of the interviews and archive footage that make up much of it.

But, as the title suggests, this film is also about Merata's children and their relationship with each other.

Merata's first five children were a lot older than Hepi and brought up hard – not just because life in the '70s was tough, but because the kids were often roped in to help make Mum's films.

Hepi himself was not only the youngest – the son of Merata and fellow film-maker Geoff Murphy – but his upbringing couldn't have been more different.

By then, Dad was a successful Hollywood director, and those early years were spent in far more comfort than his siblings enjoyed. 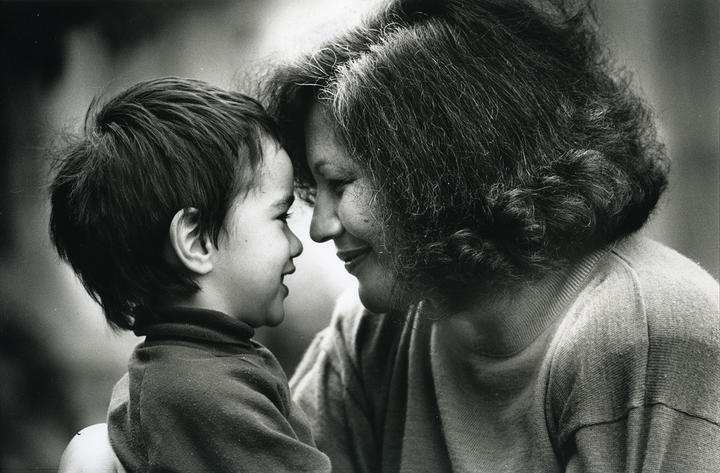 So this documentary is as much a voyage of discovery for Merata's son as it is for us.

Merata's career began – not as a film-maker, but as the subject of a documentary on Māori women living in a Pākeha world.

On screen, Merata Mita made a big impression, and the world of film-making made an impression on her.

She started taking any work she could to break into it – as an actor, a singer, a cultural adviser for foreign productions, and finally as a producer and director.

Her early documentaries were ground-breaking and angry – often the first time the point of view of Māori women had been so clearly spelled out.

She filmed the famous Bastion Point protest of 1980 at the very moment it was broken up by the authorities. And she made the documentary Patu! about the Springbok tour of 1981 – a film that cemented her notoriety.

Shortly afterward, Mita became involved in a more commercial project – the hit movie Utu, where she met Geoff Murphy (a strangely absent figure in this film).

Instead, the film turns to Merata Mita – producer, mentor and inspirational figure.

I don't think New Zealand realized quite how important Mita was overseas.

As a pioneering indigenous film-maker – and female film-maker to boot – she lit a beacon for a growing movement around the world.

The title Merata: How Mum Decolonised the Screen is a telling one. It's a love letter from Hepi to his mother, rather than a dispassionate study.

And it raises the question of how Merata Mita has changed the way we make films, through proteges like Taika Waititi.

New Zealand is certainly far less white and colonial than it was when she fought the forces of racism, sexism, vested interests and conservative audiences to get her films made and seen.

And the film world is clearly the better for Merata Mita's uncompromising determination to open it up to new voices – and not just here in New Zealand.

The romantic relationships of women have long been the sole defining characteristic of their portrayal in cinema. She was a Māori woman who made films about the Māori, indigenous and feminine perspective on life. This is abundantly clear in every interview, every article, and every film she did.

I thought it essential that this documentary embodied the principles for which she stood, and to defy the conventions which she struggled against.

I spoke at length with my dad about the project and even interviewed him on camera. He supported me 100% and fact that he got to see the finished project just months prior to his passing is a memory that I will always treasure.

To include the perspective of a pakeha male of his stature felt out of touch with the kaupapa of the film - a conclusion he came to as well upon seeing the final cut.