Review - It seems like a Hollywood no-brainer, and the makers of Crazy Rich Asians - an Asian-led Cinderella story crossed with Keeping up with the Kardashians - do turn out to have been crazy like a fox.

Starring Constance Wu (Fresh Off the Boat) and Michelle Yeoh (Crouching Tiger, Hidden Dragon), it has become a minor sensation, and not just among Asian audiences.

I'm told that the film version of the best-selling novel had some difficulty getting made, which I find hard to believe. Hollywood's been trying to tap into the Asian market for years, so I'd have thought a Cinderella story among super-rich Chinese would have been a no-brainer.

The story, as they say, is a tale as old as time, 'poor girl falls in love with handsome prince'. It's been the basis of not only various Cinderellas and spin-offs like Pretty Woman, but films as diverse as 50 Shades of Grey and even The Godfather - except, in this film nobody seems particularly poor.

Our heroine Rachel is hardly a scullery maid - she's a Chinese-American professor of game theory - and she's started going out with the dashing Nick, who is all good looks and British accent.

Nick comes from Singapore and to keep Rachel company, her best friend - the wacky Peik Lin - is a Singapore Girl too, wallowing in new-money wealth, but of course "wealth" is a comparative concept as Rachel's mother warns her.

Rachel gets the first hint that Nick's family may not be short of a bob or two when they walk straight into first class on the plane.

Once in Singapore, Peik Lin's family put Rachel straight: it turns out they're the biggest developers in Singapore.

You'll notice the pop-culture references that crop up all through Crazy Rich Asians - not just phrases like "crazy rich", but gags about The Bachelor, Donald Trump's design-sense and reality TV in general.

This is the Bravo Channel blasted onto the big screen.

After all, this film seems to argue, who doesn't want to wallow in the lifestyles of the rich and famous? That said, Nick's family actually has little interest in fame, a very nouveau-riche idea.

As personified by his mum, Eleanor (played with steely aristocracy by Yeoh), the Youngs are old money, and consider the equally privileged to be the only people good enough for Crown Prince Nick.

Thus, Rachel is challenged to break into Singapore society, despite the fact it's mostly made up of the sort of people who inspired the French revolution. They're rich, arrogant and spoiled, but at least they seem to enjoy splashing their money around, like Asian Kardashians. 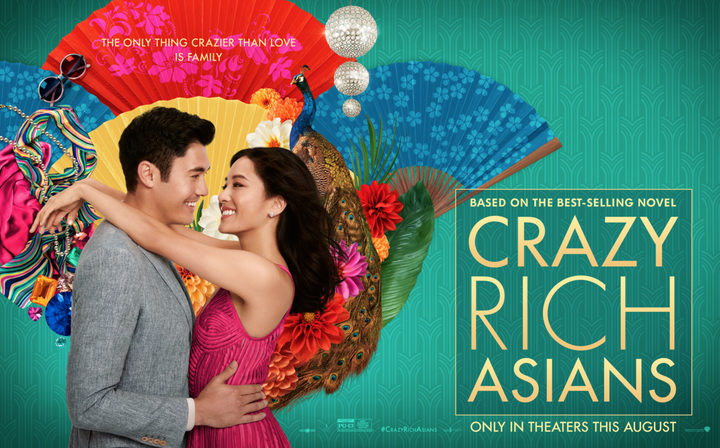 There is also a little more to the plot of Crazy Rich Asians than just conspicuous consumption. Nick's mother Eleanor turns out to have problems of her own with the steely grandmother, and Nick's cousin Astrid, played by English actress Gemma Chan has a complicated marriage.

Astrid looks like just another of the Singapore Rich List to me, and I can see her husband's problem keeping up, but the big battle is between Rachel and Eleanor for Nick's soul.

"Never enough" seems to be the motto of everyone in this film. I suspect I'd last about an hour in the 'Crazy Rich' world before I went just crazy, but this film isn't aimed at me - it's aimed at people with all the dreams of avarice.

If your idea of a good time is to dive into swimming-pools full of money like dear old Scrooge McDuck, this may be your movie.

After an hour however, I found Crazy Rich Asians a little too rich for my blood.