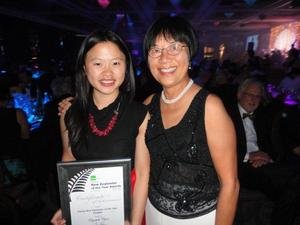 She’s an academic of great standing in New Zealand, but not many know that Professor Manying Ip's first book was produced by the oldest existing publishing house in China, dating back to the 1644 and the Qing Dynasty, or that she was one of the very first researchers to help bring a buried history to light in our country concerning our Chinese New Zealand community.

(Left: Elizabeth Chan and Dr Manying Ip at the New Zealander of the Year Awards 2012)

The infamous poll tax was levied against only Chinese immigrants coming into New Zealand. To discourage “alien immigration”, Chinese had to pay one hundred pounds each to enter the country. The Poll Tax was finally abolished in 1944 and in 2002 New Zealand became the first country in the world to issue a formal Poll Tax Apology, followed by the Canadians in 2006. There are currently around 20,000 poll tax descendants living in our country. Lynda meets the remarkable Professor Manying Ip at the School of Asian Studies at the University of Auckland.