Arts on Sunday for Sunday 4 December 2011

We hear from most of the 10 Arts Foundation laureates and award winners honoured this year. Between them they have received $360,000 as an acknowledgement of their excellent, creativity and potential.

1:00 In lieu of At the Movies this week, Simon Morris talks to one of Pixar's crack animators, Enrico Casarosa

Ant Timpson talks about his Make My Movie project which is entering its final stages. At stake, $100,000 to help the winner make a feature film. 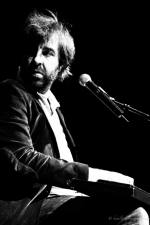 Irish stand up comedian and musician David Doherty (right) sings for us as well as sharing his favourite comedy tracks.

2:00 The questions in the middle of the night

An hour-long discussion between writers Kate de Goldi and Glenn Colquohoun, recorded at this year's Festival of Colour in Wanaka.

This week Neil McGregor reaches the Age of Enlightenment - the Eighteenth Century.