Gareth Wiley has four Woody Allen films on his CV and is currently in New Zealand working on the UK-NZ Co-pro movie Tracker starring Ray Winstone.

Auckland's Silo Theatre harks back to the Theatre Corporate days of pushing the theatrical boundaries and reintroducing the ensemble model. You'll hear the full story from Silo's Oliver Driver.

Heath Ledger's last film, The Imaginarium of Doctor Parnassus. My Sister's Keeper offers some surprises - like a dramatic role for Cameron Diaz, and a completely different ending from the book. And Michael Moore takes on the whole American system with Capitalism a Love Story.

From an illustrated scent bottle to furniture, photographs to formal and informal portraits, all of New Zealand's 40 premiers and prime ministers get together in a new exhibition in the Capital, at Shed 11. Gavin McLean talks about curating The Cabinet Makers. 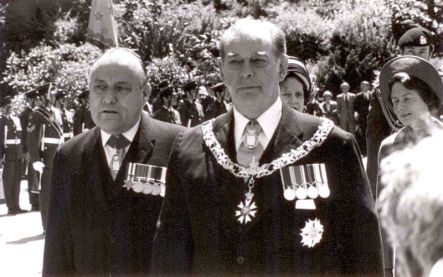 Muldoon with Holyoake as Governor General - National Publicity Studios (Private Collection). Mrs Muldoon and Lady Holyoake are in the background. 1977.

A theatrical look at the life of one of the world's greatest and most scandalous librettists, Lorenzo de Ponte. The show is coming to New Zealand from Australia, we talk to its star bass Damien Whitely (left) and to writer Melvyn Morrow.

Laura Soloman releases her latest novel about a giantess, An Imitation of Life, and New Zealand writers share some of their childhood memories in a book edited by Graeme Lay called Way Back When Before We Were Ten. You'll hear from Graeme and one of the contributors, Kevin Ireland.

A star of the Paul Taylor Dance Company, Richard Chen See (below left) is currently working with our School of Dance graduates on their end of year show.