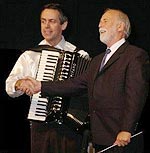 A celebration of the much maligned and misunderstood accordion, with New Zealand about to host the world champs.

Simon Morris joins the rave reviews of Peter Jackson's new production, District 9. He's less enthusiastic for American toy story G I Joe, but discovers Coco Before Chanel has something even for the fashion-challenged.

We chat to the three engineers who're up for the top award in their field in this year's Music Awards … Lee Prebble, Andrew Buckton and Mu.

One of the stars of homegrown movie Separation City - Alan Lovell.

On playing with old toys and turning them into something new and unsettling. 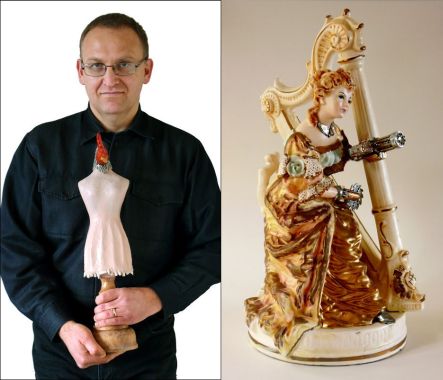 Graeme Thompson and his work, The Aristocrats - No.10 - (Harpist)

More poetry, this time from Wellington's, and Canterbury writer Frankie McMillan who's Dressing for the Cannibals.

2:50 Lucy finds out about the revival of craft, and why it's so salient for these times

Right: One of Outdoor Knit's creations for Nanageddon - keeping handrails toasty in Wellington.

The Lonesome Buckwhips: Aftermath (Part 4 of 4)

The final episode of the deadpan mockumentary.

It's almost beyond belief that a family band from such poor beginnings could achieve so much on the world stage in such a short time.

The Lonesome Buckwhips is available to listen to online.

3.45 The BBC reports on an ambitious theatrical event, marking the twentieth anniversary of the Fall of the Berlin Wall