Amanda Palmer was the lead vocalist, pianist, and lyricist of The Dresden Dolls but she was on the last leg of a world tour of her solo show There Will Be No Intermission when we went into lockdown.

She joined Jesse Mulligan for a chat about lockdown in Hawke’s Bay, the power of Patreon and some favourite films.

She was finishing off a one-year world tour in New Zealand in March when the world started to change very quickly, she tells Jesse Mulligan. 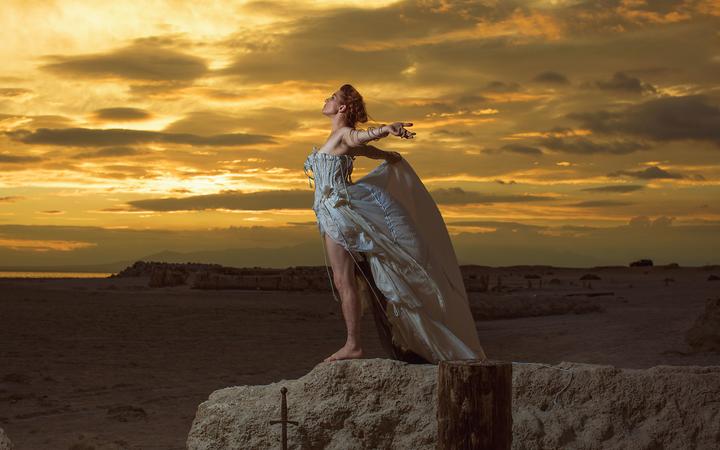 “I came from Melbourne because I had just done a bunch of shows in Australia.

She almost didn’t come to New Zealand, she says.

The day of her show in Christchurch was when New Zealand went into lockdown and since then she has been hunkered down in Hawke’s Bay with her son Ash.

“That day is when I found out that the quarantine was going to go into effect so raced to the dressing room called Neil said get on a plane right now.”

Her son, who is four, is adapting well to his strange new life, she says.

“He doesn’t know that what he’s homesick for isn’t really there and what is there right now is really horrifying.”

Her one-year tour wasn’t supposed to end this way, she tells Jesse Mulligan.

“The fact that it dropped me off here, that tour prepared me for this moment. I didn’t think I would need to be this strong, I thought I was about to go home and take some time off and  hang out with my husband and my kid in upstate New York and have a summer of cooking and gardening and summer camp. And instead I’m here.”

Palmer is a great believer in crowdfunding and uses Patreon to allow her to make her art.

“Most people at this point understand the basics of crowd funding and I’ve been using crowd funding for a long time. I crowd funded my first record back in 2010. Patreon, the crowd funding patronage site that I use, is basically the next logical step for an artist who wants to crowdfund but doesn’t want to do a Kickstarter every six months to make an income.

“Basically, Patreon is like subscribing to an artist full time, it’s like having an old school bunch of patrons except they’re micro patrons they don’t have to be big wealthy kings and queens and rich people.

“I currently have 15,000 patrons all giving me about $3 a month. And that pays my bills pays for my staff, pays all my recording costs and makes it possible to keep almost all of my music free to the public.”

She has done a TED talk and written a book The Art of Asking on the subject.

“Crowdfunding and the internet has really opened up a space for people to directly fund and support the artists whose voices and stories they want see manifest in the world.

“Nowadays it feels you can exhaust yourself in the hustle, to hustle up help, to hustle up where the money is going to come from in an economy where digital art goods are so easily replicable.

“And the way I have solved that is to go to the people who love my work and say will you give me three bucks.

“If you want me to keep working and keep, to keep broadcasting trust me give me a little money and I will keep making things.”
Amanda's choices

Her choices:
Tracks
Black Boys on Mopeds by Sinead O'Connor
Talkin' About A Revolution - Tracy Chapman
Mama's Cryin' Long by Rhiannon Giddens of Our Native Daughters