The construction sector producers about 1.6 million tonnes of waste every year - about half of New Zealand's total output. So, there's plenty of room for improvement. That's where Ged Finch comes in. 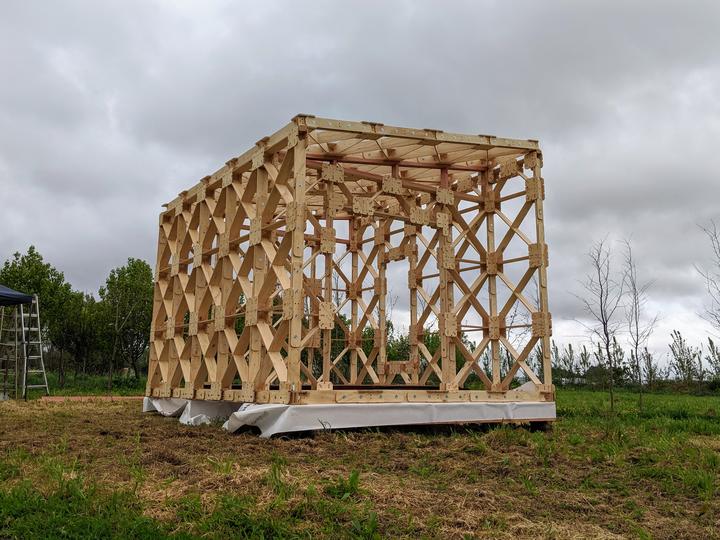 Finch’s a PhD candidate at Victoria University in Wellington - and he's created a self-bracing, wooden frame, which could have big implications for how buildings are constructed around the world.

He's just returning from showing off his design in Switzerland and joined Jesse Mulligan to explain a bit more about it.

Finch says the frame was the result of around three years of research while he was at architecture school.

“I did my master thesis looking at what sort of waste comes out of the industry and what we could do about it, and things have really spiralled from there. There’s obviously a lot of interest in this technology at the moment, given the sustainability movement.”

He says much of the waste problem in construction comes from the economics of building.

“We’re in such a hurry to build all these houses for all these people that they way we put them together is really just sort of nails, adhesives, and nothing more clever than that.

“So, what happens at the end of the building’s life is that it takes so long to separate all these contaminated materials, and they’re all so badly damaged, that they all end up in our landfills.”

He says he looked at how they could change the “building envelope” – the outside of the house – to reduce waste.

“We said, what would we need to change in that wall to make it recyclable, and it turned out it was the structure, it determines how everything is stuck to a building. So, we came up with this sort of diagrid structural system that’s manufactured out of plywood components.

Finch says that normally, builders have to stick plasterboard to the wall to give the structure strength. Under the system he’s designed, that’s no longer necessary and means all the materials can be recovered and reused at the end of the building’s life.

While the normally turnaround of a house is a rather long 80 years, the technology can be used in things like office fit outs where new tenants could reconfigure the system without creating waste.

He says New Zealand is quite a bit behind in building technology compared to places like Switzerland, where he was showing off the frame recently.

“It’s pretty alarming. Things like air-tightness of our houses, glazing quality, thermal efficiency, moisture control, all of those issues are well and truly dealt with in Europe.”

A recent report said 30 percent of all houses in Wellington have mould growing in them. Finch says, in Europe, that would be unthinkable.

Finch says he’s keen to get the product happening on the New Zealand market and has had an enthusiastic response from builders he’s spoken to.

“Everyone’s looking for a better way of doing things, particularly when they see the state of housing.”