The Topp Twins on damehood and spontaneity

The Topp Twins are celebrating their first anniversary as Dames of the Realm with performances at the Hawke's Bay and Nelson Arts Festivals in October.

The national treasures speak to Jesse Mulligan about damehood, spontaneity and Ihumātao. 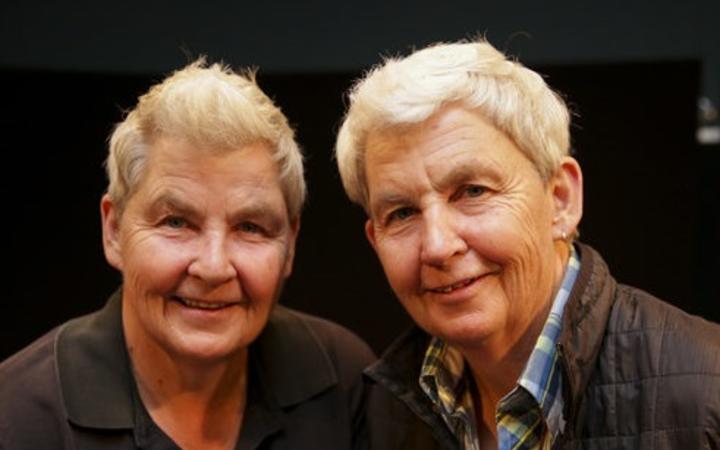 It's quite weird getting referred to as 'Dame', but otherwise life hasn't really changed much, says Lynda.

"I'm building a fence today. Nobody has come by to help me."

Jools says the best part of becoming a dame was having the Topp parents at the ceremony - their father Peter died recently.

"Most people who are receiving that accolade, their parents aren't there. So for us, to have that happen was the biggest joy, that our mum and dad got to watch that ceremony and be really proud of their kids."

So what can people expect at their festival shows in October? Spontaneity, says Jools.

"If you gave a script to us, we'd panic… we really want be able to react to the audience cause every single audience is different."

"We do all our rehearsal now onstage live at the gig," adds Lynda.

As well as being performers, the Topp Twins have been prominent activists since the 1970s.

Jools says the conflict at Ihumātao is very different in nature to 1978's Bastion Point land protest, at which they performed.

"[Compared to Bastion Point] this is a new kind of drama [with a] conflict within the tribe. We have to give Māori the voice they need to work out their own problems. If we all just jump in there and don't understand what's going on we haven't learnt from the past things we've been a part of.