John Hart on why he's farming crickets in the Wairarapa

This time last year Wairarapa farmer and technology consultant John Hart was considering crickets as a potential food source for chickens, when he realised they were much too expensive and would be better as a food source for people.

At the same time, the owner of Masterton bakery, Breadcraft, was in Canada, looking at sustainable packaging. He just happened to pop into a cricket farm to research cricket flour while he was there. 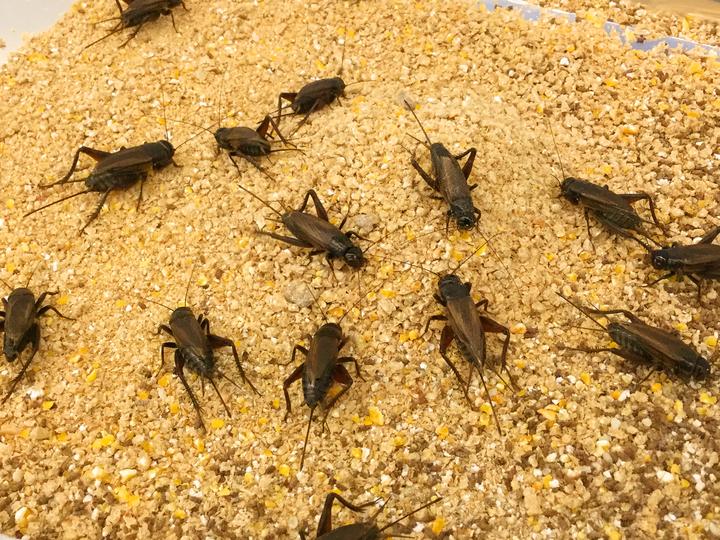 A mutual friend introduced them eight months ago and they created Rebel Bakehouse, a brand of hemp seed and cricket wraps which is now in supermarkets nationwide.

Rebel Bakehouse is also a finalist in the 2019 Wellington Gold Business Awards.

Cricket farming started out as a “thought experiment”, Hart says

“Coming from a sheep and beef farming background, but with tech before that, it felt like an interesting challenge to see if it was possible, and with a bit of research we saw that it was definitely happening overseas. So, it wasn't like a brand new thing that no one's ever done before.”

Hart says he even found a source of crickets in the Wairarapa.

“There's a chap with a company that mail orders them if you've got reptiles or zoo, you can actually buy crickets in the mail. So, we got a box of breeding crickets and started from there and just bred them up.”

“The more I looked at them, the more I realised they were actually an incredible source of high value nutrition in terms of protein and vitamin B and omega 3 and 6. And you can grow them in a very, very small space relative to other sources of protein.”

Once he started growing them Hart says he became attached to these “neat little critters.”

“You look around the world and there's something like 2 billion people that eat insects every day as part of their regular diet. So, you know, to us what seems like a pretty weird alternative is actually a staple for a lot of people or even a treat in a lot of cultures.”

Hart is working with the black field cricket, endemic to New Zealand.

“In the wild, they live in kind of cracks in the ground and they breed usually about once a year, and the eggs sort of stay there until the next spring and they hatch when it's warm.

“So what we wanted to do is create an environment that was much more conducive to them breeding - so we've created what I call Fiji on a warm spring evening.”

Warmth and humidity keep the crickets in the mood year-round, Hart says. “If it's always warm and humid they will basically breed all year round. So as long as you give them the right conditions and the right medium to lay their eggs - in they’ll do the business.”

The right environment in this case is two 40-foot shipping containers, which Hart says looks more like a data centre or a high-tech farm than it does an apple farm.

“Lots of clean, white surfaces and lots of ventilation going on to keep all the air moving. And lots of large plastic containers full of crickets.”

The crickets, about 1.5 million of them, are kept in large plastic containers, stacked six high and Hart says the insects are kept humanely.

“I wouldn't be doing this if I didn't think we could do it humanely and in a way that made the crickets happy. And when you walk into the farm and you hear them all chirping away, they're definitely expressing some natural behaviors, because the chirping’s actually their mating call, so that's a good sign.”

“We have breeding boxes that are producing all of our eggs so they’re populations of male and female crickets that have got the perfect conditions to breed.

“We give them a medium and containers they lay in and we can swap that out so we can actually incubate the eggs separately - it's about keeping the young ones away from the adults otherwise they become food pretty quickly.”

The crickets initially were fed with a proprietary commercial feed, but Hart says they now make use of bread that would have gone to waste from the bakery.

And when the time comes to harvest, the end is swift and humane, he says.

“We use nitrogen gas which basically just puts them to sleep within a few seconds, and they don't recover from that. So, it's a very humane process and very quick.”

The crickets are then dried out and turned into a nutritious powder.

The whole process is virtually a closed loop, Hart says.

“We already have us most of the water required, there's not a huge amount of electricity that we're using, but that could be supplemented with solar panels.

So you could actually get to quite a circular state where you're not putting a whole lot of input outside of the cricket farm itself.

Compared with traditional beef and sheep farming, the numbers are illuminating, Hart says.

“Crickets and insects in general, generate a fraction of the greenhouse gases that red meat does - 1 or 2 percent and they use a tiny fraction of the water per kilogram of protein produced, hundreds of times less and obviously the land size you can get a lot of protein growing in a reasonably small area.”

Hart says he plans to expand and could conceivably produce hundreds of tonnes of protein from a single hectare.

“At the moment, by comparison, you can put a cow on one hectare of farmland. So it's a quantum difference in resource use.”

The cricket flour isn’t really flour, it’s powder, Hart says.  A protein-packed a high value powder which can be added to other baked products.

“Unlike a lot of plant proteins, cricket protein is complete. It's got all the essential amino acids, it's very high in vitamin B and it's also got a good amount of omega 3 and 6.”

“When you taste it as a raw product, it's got a lovely, nutty, meaty sort of flavour. And I kind of liken it to a really complex red wine.”