Macaroni cheese was the first thing Kelly Gibney learnt to cook as a kid.

Her gluten-free mac & cheese is "a more wholesome spin on a comfort food classic".

No-one in Kelly's family is coeliac, but she sometimes cooks gluten-free for variety.

"Whether you have an intolerance [to wheat] or not, I think it's great to mix it up."

Gluten-free pasta (Kelly uses Ceres Organics) holds up beautifully against traditional pasta in this dish - you won't miss the gluten, she says.

"There's no gritty texture. It doesn't make any difference at all."

Using cauliflower puree instead of bechamel sauce is a good way to get some veges in, she says.

Cheddar cheese is the only dairy included, which is "quite a nice way to lighten the dairy load."

Kelly says this gluten-free, vege-added mac & cheese is the only one her six year old knows – and loves.

Kelly Gibney is the author of the cookbook Wholehearted.

You can find more of her recipes – including the popular Portobello mushroom & lentil bolognese with zucchini noodles and kids banana & coconut cake – on her blog. 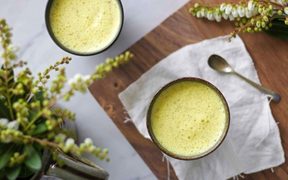 Healthy food blogger, Kelly Gibney shares some ways to use the spice, turmeric, which has many health benefits. She also shares a recipe for a Turmeric Latte. Audio 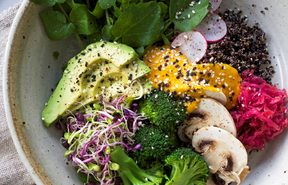 Food writer Kelly Gibney describes her style as 'flavour-first whole foods'. She shares her recipe for a summer salad she calls a Yoga Bowl. Audio 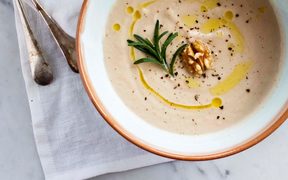 Jesse Mulligan's four-year-old daughter can take down three bowls of Kelly Gibney's roasted cauliflower and walnut soup. The Kiwi wholefood chef and blogger shares the recipe with us. Audio