Collecting microorganisms paid off for Philip Elmer’s research team when they found one in their freezer that seems to reduce the kiwifruit vine disease Psa. 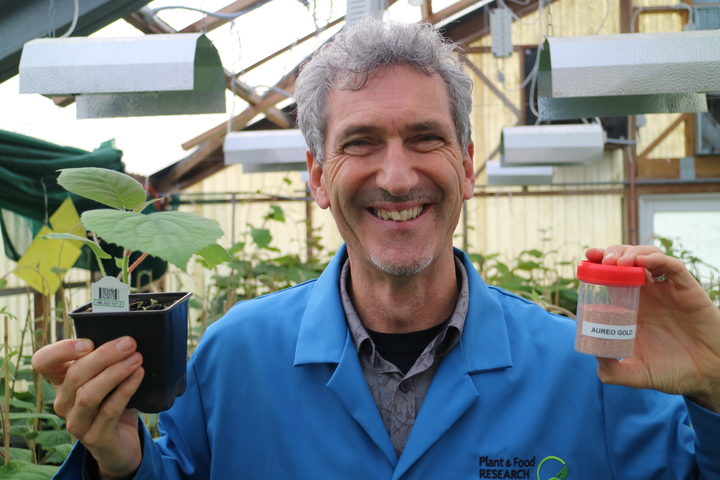 Dr Philip Elmer, holding a sample of the latest bio-bactericide for control of Psa in kiwifruit, and an experimental potted ‘Hayward’ kiwifruit plant that will be used in experiments Photo: Supplied

Dealing with a disease outbreak can be a grower's worst nightmare - especially when one of the most effective treatments, pesticides, can have a big effect on how the produce is received.

Dr Elmer, a Plant & Food Research scientist, develops biological products that growers can use as an alternative way of controlling plant disease.

Elmer started research on how diseases develop in 1995, at a time, he says, when “the world was changing”.

“There was a lot of demand for getting the residue out of some crops and people were looking for alternatives that were environmentally safe.”

At the same time diseases were developing resistance to commonly-used fungicides “and I thought to myself, there’s got to be a better way.”

An invitation to a biological control institute in the Netherlands set him on the path of finding natural ‘antagonists’ to common plant diseases.

Multitudes of microorganisms exist in nature – on every fruit and leaf. The trick is to identity whether they cause disease or fight it. The researchers collect whatever microorganisms they come across and put them in cold storage, in case they turn out to be useful.

“We’re kind of like natural magpies – we collect microorganisms a bit like how people would collect stamps."

“When Psa, the vine-killing disease, struck New Zealand in 2010 we literally had freezers full of microorganisms.”

They dropped all the projects they were working on to start screening the collection.

One naturally occurring microorganism, commonly found in the environment, formed the basis of a bio-bactericide due to be released to kiwifruit growers in time for Spring 2018

“It brings about at least a 50 percent reduction of Psa on a kiwifruit vine”, Elmer says.

He and his team came up with three products for different seasons which, when used together, provide year-round protection and mean wine growers don't have to use chemicals.

It’s an advantage that his 13-member research team has been together since 2000, he says.

“We’ve all got our strengths and weaknesses.” Some like the basic science – they want to find out why an organism works in the way it does – while others prefer applied science – how things can be used.

“I get paid to do what I love doing - so I think I’m pretty fortunate.”

Dr Philip Elmer is a finalist in the KiwiNet entrepreneurial researcher award. He was a key member of Psa response team that was awarded the Prime Ministers Science prize for 2017. 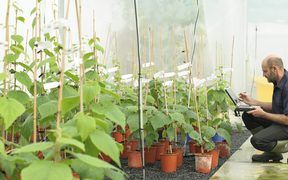 A 100-strong team of researchers from Plant and Food Research have won the 2017 Prime Minister's Science Prize for using science to solve the kiwifruit PSA crisis. Audio