A 100-strong team of researchers from Plant and Food Research have won the 2017 Prime Minister's Science Prize for using science to solve the kiwifruit PSA crisis. 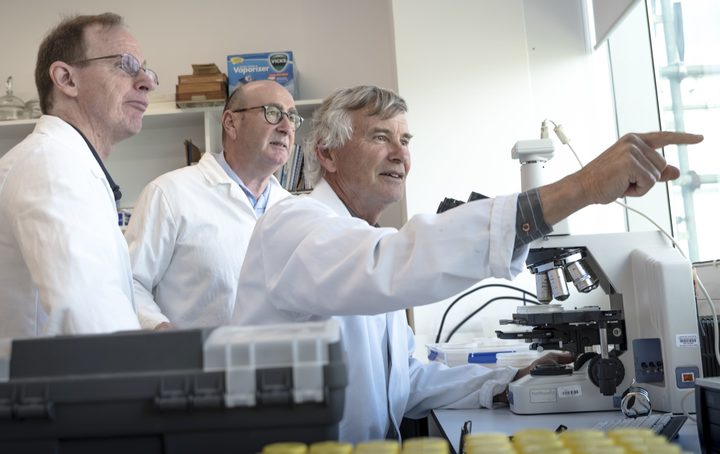 A huge team of scientists from Plant and Food Research was mobilised to tackle the problem of kiwifruit PSA – and within remarkably short order, identified a solution.

Eight years later, that team has been rewarded for their ‘crisis science’ with the prestigious 2017 Prime Minister’s Science Prize.

Dr Bruce Campbell is chief operating officer at Plant and Food Research. Since 2010 he has spearheaded an enormous scientific response that has seen more than a hundred scientists redeployed to work on the problem of kiwifruit PSA, Pseudomonas syringae pv. actinidiae. He said the early days were challenging.

“There was a huge amount of confusion at the beginning,” said Dr Campbell. 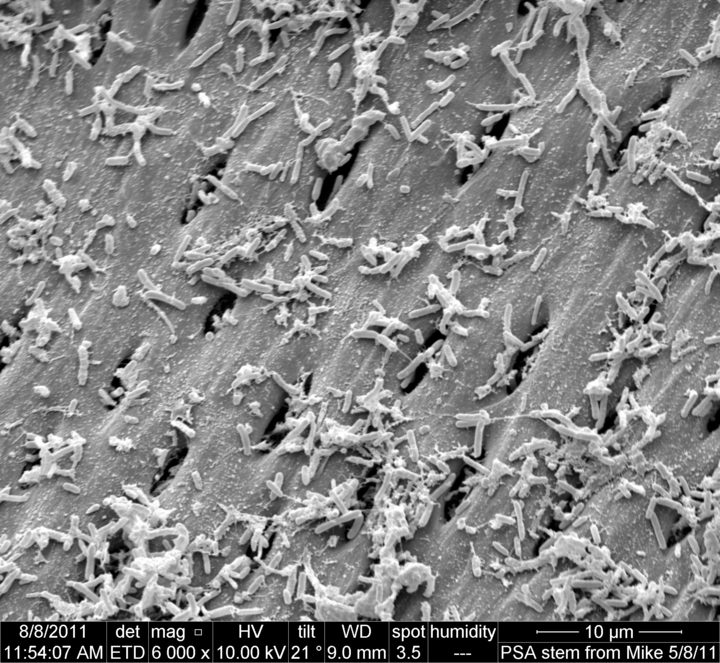 The disease arrived – and spread – very rapidly, and kiwifruit growers were understandably very anxious as they watched precious vines dying before their eyes.

Luckily for Dr Campbell and the team, they would soon discover that they already had a solution: a new variety of kiwifruit known as Gold3, which is not only resistant to PSA, but was an exceptional fruit.

Gold3 is now marketed by Zespri as the Sungold variety, and it started life as one of hundreds of likely cultivars that have been bred over the years by Plant and Food Research. 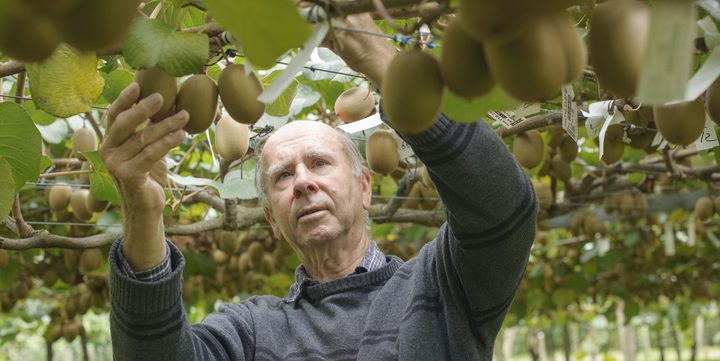 Plant breeder Luis Gea works on a Te Puke research orchard. At its heart lies a collection of plants that he calls the “crown jewels of kiwifruit breeding.”

He said Plant and Food Research had “the second largest germplasm collection outside China … and it holds the source of resistance for future cultivars”.

Traditional plant breeding is a time-consuming business. The research that would lead to the Gold3 variety began in 1995. The plant that would eventually become Gold3 was one of 2800 seedling crosses planted in 2002, producing its first four fruit two years later. It wasn’t until 2009 that the first small commercial trials were planted. 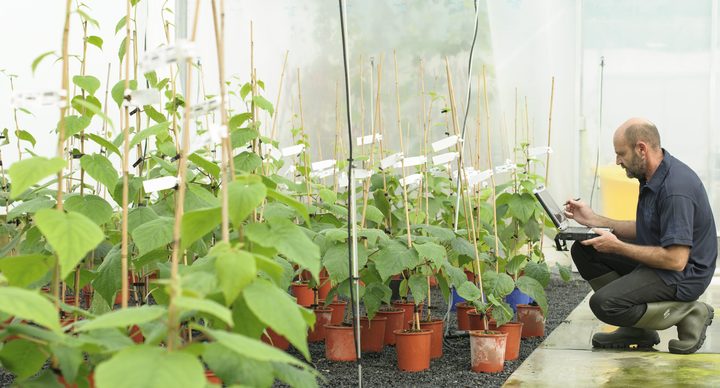 Plant breeder Luis Gea inspecting some of the hundreds of potential new kiwifruit cultivars that he has bred. Photo: Plant & Food Research Limited

“The huge team that we assembled had just about every discipline in it that you can imagine,” said Dr Campbell. “So we needed to understand how the disease operated, we had pathologists and other people. We had to have breeders and geneticists to understand if we could develop new genetics that could overcome the disease … and also people in chemistry, biology and food science to know if we came up with an acceptable solution.”

Mr Gea and the plant breeders already had hundreds of potential new cultivars that needed to be tested to see if they had any resistance to Psa. These seedlings were passed onto scientists like Tony Reglinksi, who had to come up with new ways of quickly testing plants. 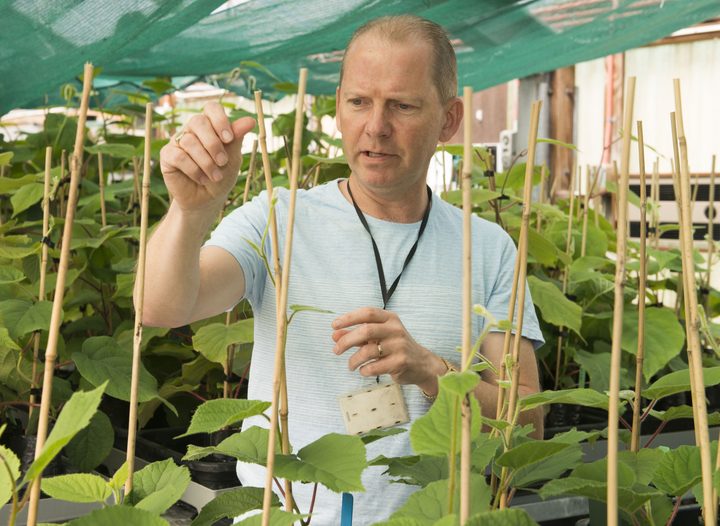 Tony Reglinski was involved in testing new kiwifruit cultivars to see if they were resistant to kiwifruit Psa. Photo: Plant & Food Research Limited

In the meantime, geneticists like Matt Templeton were trying to better understand the pathogen itself.

They already knew there were several strains of PSA in New Zealand, and they needed to sequence the PSA genome and work out a quick diagnostic test to be able to tell the virulent strain from a more benign one. They also wanted to start probing the PSA genome looking for potential weaknesses that they could exploit.

In trials, Gold3 soon proved to be much more resistant to PSA than both the Haywards green variety, and the Hort16a or Gold kiwifruit which were widely planted at the time. Because commercial trials were already underway, it was relatively straight forward to scale-up production and thousands of hectares have now been replanted with Gold3.

Forty-eight million trays of Zespri’s Sungold kiwifruit were sold in 2017, with an export value of $686 million. 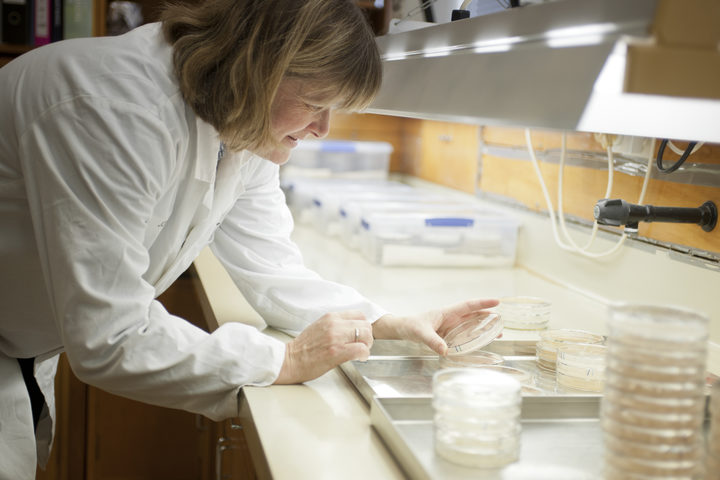 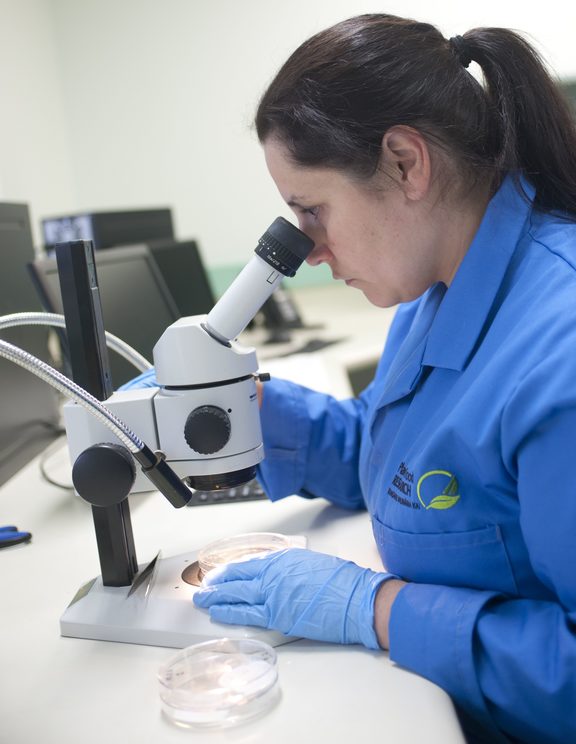 “We were thrilled that we were able to come up with a solution that’s allowed the industry to go on and be even more successful than it was pre-PSA,” said Dr Campbell.

But while the industry is back on track, and growing at a rate of about 10 million trays of kiwifruit each year, Dr Campbell and the team haven’t stopped their work.

He said the plants and the disease were in a constant battle together, fighting against one another, which meant that the researchers must continue trying to stay one or two steps ahead.

Plant and Food Research scientists are continuing to study the interplay between diseases such as PSA, to better understand how they infect plants, how they cause disease, and how plants respond to infection and fight back.

Damian Christie, from SciFilms, has been awarded the 2017 Prime Minister’s Science Communication Prize to set up the Aotearoa Science Agency, to create science-based video stories.

Plant breeder Luis Gea introduced his work at the research orchard where he breeds new varieties of kiwifuit.

Tony Reglinski explained how he was testing new cultivars to see how resistant they were to kiwifruit Psa.

Matt Templeton talked about genetics work to sequence the genome of kiwifruit Psa, and understand how it invaded and destroyed kiwifruit vines.

Plant and Food Research scientists also carry out research into the best ways to store kiwifruit.

Peter Fineran from the University of Otago investigated bacteriophages as a possible treatment against kiwifruit Psa.

Kiwifruit win gold stars for their vitamin C content in the The Science Of… vitamin C podcast.