‘So Sweet’ – The Cuban Bothers.

Our reporter Lois Williams is in Waitangi.

1:20 Our Past and Future Relationship with the Middle East - David Shearer

Labour's foreign affairs spokesperson and former UN humanitarian, David Shearer, is giving a free public talk on the 15 February for New Zealanders wanting to better understand the Middle East and New Zealand's relationship to it. To talk about the talk he joins us now from Waitangi. 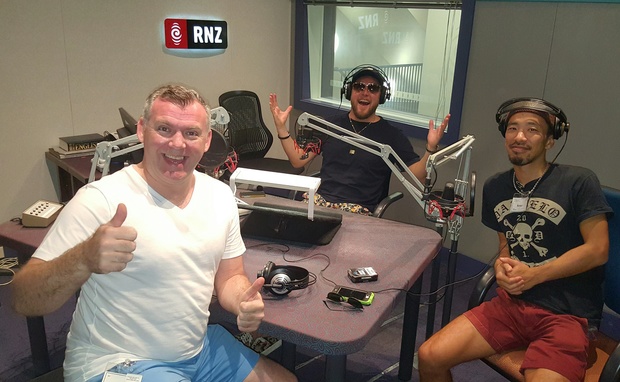 They're funky, soulful, funny and rude. The Cuban Brothers have landed in Wellington from the UK. They came from humble beginnings, and have gone on to support and collaborate with some of the biggest names in music. They're the entertainment of choice for the likes of Elton John, Richard Branson and Robbie Williams. Miguel Mantovani, Archerio Mantovani, Kengo San and Juan Erection are Los Hermanos Cubanos, The Cuban Brothers.

The Karekare Surf Lifesaving Club has a simple goal for their new drone; they want it to help them save more lives.

Nicola Toki is the Department of Conservation's Threatened Species Ambassador. And her critter of the week is an extremely rare leech.

Two of the quintessential Kiwi women of rock in our Auckland studio, performing as something of a precursor to an even bigger show in Hawkes Bay next weekend and at Auckland Zoo (of all places) two weeks later. These ladies are among a handful of women who created the musical background to our lives during the 70's, 80's nd 90's and are among the most accomplished musicians in the country. It is our pleasure to welcome Debbie Harwood and Shona Laing.

Nadia Lim has a recipe for Black Doris Plum Sorbet.

Yvonne Lorkin discusses the effects of temperature on wine.