I Love You, Suzanne by Lou Reed.  Chosen by Auntie Hiatus (#AUNTIERADIO)

Craig Ogilvie is the marketing manager and board member for Showbiz

Grant Meese is an Auckland based freelance director

A massive solar storm has caused an impressive Aurora, most easily seen in the south of the country.  Bob Evans runs the Aurora and Solar section of the Royal Astronomical Society. 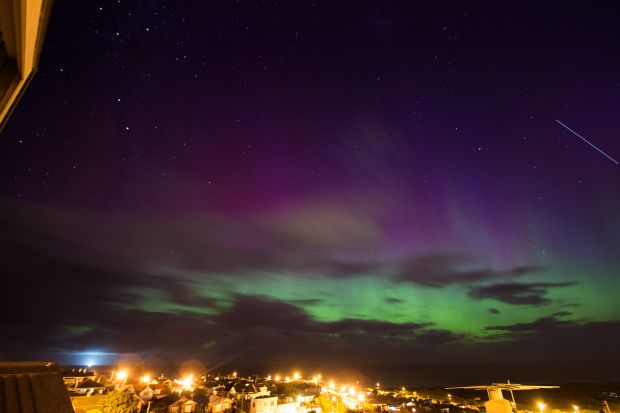 Photograph sent in by listener, of the aurora over Dunedin on Tuesday night, from Andersons Bay. You can see the International Space Station satellite as a streak on the right hand side, and a squid boat fishing on the left hand horizon. Photo by Nicola Pye

For more than a decade this country has built a particular relationship with Afghanistan.  That's because of the Defence Force, which has worked in reconstruction and training in a country which has long suffered from conflict.
Now another New Zealander, involved in a different type of work, has just returned from Afghanistan.  Heidi Godfrey says she wants to dispel any notions that it's a dangerous place to be

This week's Expat is Simon Moffatt, who is living and working (and skiiing on a daily basis) in Banff, Canada

As the film of the best-selling book by Irene Nemirovksy, Suite Francaise, is released in cinemas Witness hears the extraordinary story of the manuscript which lay undiscovered in an old suitcase for more than 50 years after Irene Nemirovsky's death in Auschwitz. We hear from her great-granddaughter, and from the man who eventually published Suite Francaise, Olivier Rubinstein

Spider courtship can be a deadly affair. As the smaller male enters the female's web, he risks being mistaken for prey and eaten on the spot. Massey University zoologist Anne Wignall finds that courting males pluck the web's strings to deliver their best pick-up line