1:10 Best song ever written.  'John Barleycorn' by Traffic is nominatated by Hugh Grenfell of Auckland.

In Our A to Z we travel to Darfield, reaping the benefits of the Christchurch rebuild ..but some in this town still have their own rebuilding to do.  Ann Jarman on Darfield's farming and cultural heritage.  Aaron Orangi on the post-earthquake re-energisation of Darfield.  Leonore Ashby on the destruction and rebuild of 'Nesslea' homestead.

The Mexican-American singer-songwriter Sixto Diaz Rodriguez has arrived in New Zealand. Rodriguez produced the albums Cold Fact and Coming from Reality in the early 1970s, but then he disappeared from the music scene. Unknown to him, his work had become extremely successful and influential in South Africa and Australia. But nobody knew who or where he was. A website called The Great Rodriguez Hunt was set up in 1997 to try and find him and the result was the Oscar-winning documentary, Searching for Sugar Man. 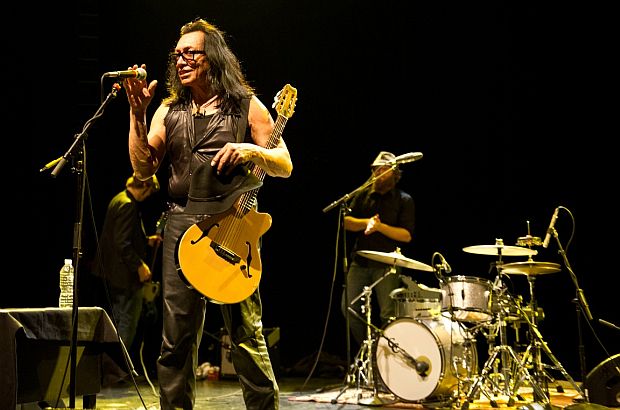 This is a story about being saved by an Angel and an English bull terrier named Remi. Upper Hutt couple Angel Marsh and David McCready were driving home over Haywards Hill on Monday night, when they came across a trapped motorist.  But the way in which they found the man is something of a special story.

Christchurch's iconic Arts Centre has been off-limits to the public since it was damaged in the Canterbury earthquakes. But it's being restored and strengthened, using new construction techniques, as well as old ones such as stone masonry.  Ruth Beran gets a rare behind-the-scenes glimpse of the Arts Centre, and Rutherford's Den, which was a popular education space.