'Operator' by Manhattan Transfer, chosen by John Ross of Northland.

New Zealand Live comes from Auckland again this week where Simon is joined by a trio of Ukulele players. Originally formed six years ago to play just a short set at a music festival organised by one of their number, this band has stayed together and has been working hard to create a repertoire of original songs to match their unique sound. A second album was released last month and they are currently in the middle of a tour to promote it. They've been here before, but it's always nice to welcome back, Ben Collier, David Thiele and Dave Parker, who make up The Nukes. 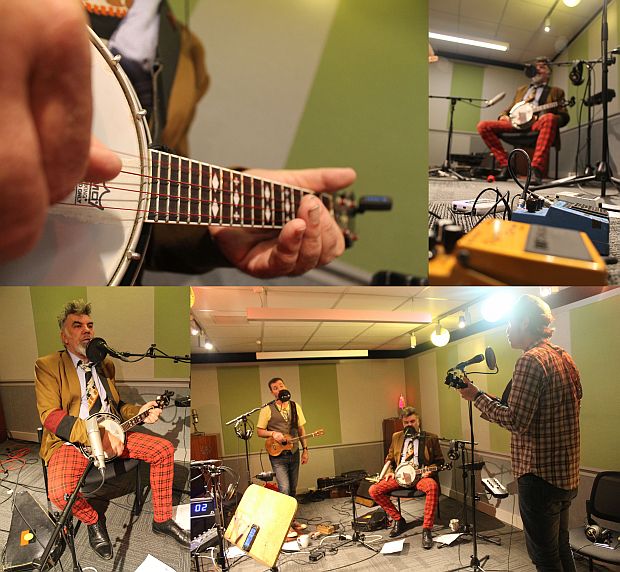 Comedian Michele A'Court joins us to talk about Joan Rivers. The caustic, raucous, rude and funny American comedian has died at the age of 81. She was one of the first women to break into the male dominated world of stand up comedy. Joan Rivers began her career as an actress half a century ago. Her first television break through was in 1965 as a guest on the Tonight Show with Johnny Carson, the man who went on to be her mentor. She went on to host The Joan Rivers Show, which won her a Daytime Emmy for Outstanding Talk Show Host and a star on the Hollywood Walk of Fame. She was a harsh critic of celebrity style, but she herself was often the centre of her own jibes.

Get ready for a giggle. Christchurch is gearing up for its first Laughter Wellness Conference. Katy Gosset talks to the organisers and hits the streets to ask Cantabrians what makes them laugh.

Noah has obtained an address for Mami and sent her a message  asking her to join him. This is the final episode  ofTuvalu by Andrew O'Connor, adapted by Gail MacCallum from the novel published by Allen and Unwin. The reader was Garth Holcombe rand the recording was an Australian Broadcasting Corporation production directed by Anne Wynter

2:45 Feature album - Back to the Roadshow by Violet Road

Violet Road are from a northern Norwegian city called Tromso, where the scenery is spectacular. This is reflected in some of their videos, including this one for the song 'Can you hear the morning singing'.

Chris Fortune's got a modern version of the mock whitebait pattie (you may remember the original from your Edmonds Cookbook). He'll also discuss his recipe for Lemon and Fennel  Cream. And an update on his Kids Can Cook travelling roadshow.

Blenheim wine consultant, Belinda Jackson, with a story from the Bronze Age to illustrate our long history of wine appreciation. Prime Ministerial backing for the reduction of alcohol in wine. And her wines of the week:

And Sarah McMullan reviews Housebound, The Keeper Of Lost Causes, Before I Go To Sleep and  Into The Storm.

Can skin think? Why do sharks prefer men? What to wear to beat BO. The problem with Game Of Thrones and abandoned dogs. How to tell if a battery is dead without a meter. What women should know when smoking cannabis. Who owns your i-tunes and those books on the kindle after you die?