2:10 The Golf App - Daniel Howe - As golfers, wouldn't it be wonderful to update our handicaps in real time? Well two students from the University of Otago are creating an app to do just that. 22 year olds Daniel Howe and Kieran Patchell had an epiphany while out playing a round after they left their scorecard at one of the holes.
That epiphany has now turned into a serious business idea, in the form of GolfPoint app.

2:20  80 Today - Kevin Ireland  - One of New Zealand's most prominent and well-loved writers is 80 today, and is celebrating with the launch of his Selected Poems, in his home town, Devonport. This is his 20th book of poetry, 50 years after his first book in 1963. He has also published short stories, six novels, and two memoirs.

2:30 Reading - Little more than half a century after teenagers were invented as the darlings of the advertising and retail trades,  the elderly have been identified in the same way as a new primary target. And in today's extract from his essay 'On Getting Old',  Kevin Ireland as he looks at The Third Age as a market, our ever-increasing life expectancy and the changing job description of the elderly.
- - - - - - - - - - - - - - - - - - -
MUSIC DETAILS
Rockin' Chair - Hoagy Carmichael. Sung by Louis Armstrong. Ken Burns Jazz, Columbia
C5K 61432, disc 5

3:10 Freeze - Louise Hidalgo from BBC Witness - When a group of London students organised an exhibition called Freeze in 1988, they couldn't have foreseen that it would change the face of British modern art. Louise Hidalgo. Louise Hidalgo talks to Mat Collishaw who was one of them.

3:20 One Hawk Down - Sage Forest - Swamp harriers are often seen on our rural roads, feeding on road-kill. Sometimes they don't dodge the traffic fast enough themselves. Sage finds an injured harrier on the side of the road and takes it to Halifax Veterinary Clinic in Nelson, where vet Hans Andersen checks it out. Unfortunately the prognosis is not good. 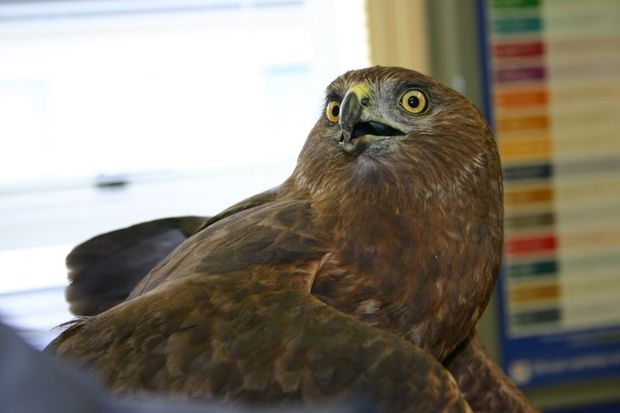 3:30 Maori Rock Art - Veronika Meduna
Maori rock art is the oldest, but little known, traditional expression of history and culture. Hundreds of ancient drawings have been identified on limestone walls in the South Island alone, providing a record of early Maori exploration - and now, they have attracted the interest of international archaeologists.

4:06 Chris Trotter and Lisa Scott are on the Panel today: Nature gets the benefit of the doubt - we'll talk about Nick Smith's decision not to allow a tunnel through Fiordland, and what it might mean for the proposed monorail.
What next for the families of the Pike River miners, .What UK border control officials can do with your mobile phone...
Travelling overseas for dental work, what are the risks?...And fictional fighters, or reality TV stars, who are the best role models for  girls?