1:10 Best Song Ever Written- Dot Francis of Tauranga nominated Let it Be by the Beatles

1:15 Your Place - Our tour guides show us around Paparoa today - the village at the head of the Kaipara Harbour. 150th celebrations this weekend.

2:10 Sailor Rescued off South Coast of New South Wales - Glen Ey
For four days this week,  Glenn Ey was adrift and missing on his stricken yacht with a broken mast, in rough seas and no fuel nearly  500 kilometres off the coast of Sydney.  The amazing story of Glen's rescue early this morning.

2:20  TSS Earnslaw - Jim Sands
One hundred years ago today, the Lady of the Lake, the TSS Earnslaw steamed across Lake Wakatipu from Kingston to Queenstown for the first time.  At the turn of the century, passengers were unimpressed with  the standard of vessel plying Lake Wakatipu and the amount charged. . So the service was taken over by New Zealand Railways and a grand, high class steamer was ordered. Jimmy Alcorn came from a long line of shipbuilders in Scotland and the North of England. . He was given the job of Shipwright and foreman builder on the Earnslaw. Today his descendants boarded the ship for a special Centenary cruise. Jim Sands is Jimmy Alcorn's grandson.

A quiet stroll along Pohara Beach turns up an interesting log of cyprus. Grant Lewis cuts into it with his saw, sniffs and hefts it. It's good. In a few months he'll be playing it. Not all of his didges are logs, though. Some are sculpted from blocks of wood, the internal chamber twisting like a colon. Grant learned this art in Australia with mentor Adam Henwood, using the principles of sound to enhance resonance and the healing frequencies, which are further amplified by crushed local quartz crystals coating the inside of his didgeridoos. 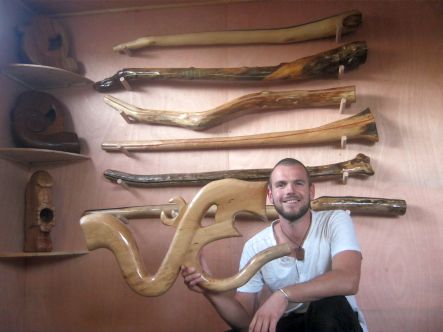 3:20 Our Changing World   Toxoplasmosis - Ruth Beran
Massey University's Wendi Roe and Laryssa Howe worked together to identify toxoplasmosis as the cause of death for dolphins recently washed up on New Zealand shores.Find out more about this parasitic disease and how it affects humans.

Christie Marceau's murderer, the circumstances of his release on bail and the question of his insanity .. Napier's art deco facades that would crumble if there were a new earthquake. Can we afford to build against every earthquake contingency?  How do you consume your media now - the changing patterns  .. The end of the Ridges on television, a final post-mortem on the presidential debate and a final farewell to Lance Armstrong.