Meredith Alban-Jones nominated "Wild is the Wind" by David Bowie

Our Your Place tour guides were Peter Wilson, Janis Miller and Denis Lepper.

2:10 The story of Carrie Allen as told by her Dad, Jamie Allen

The Taranaki Cathedral, the Church of St Mary's in New Plymouth, is the oldest stone church in New Zealand.

Early settlers and soldiers who died in the New Zealand land wars in the 1860s are buried there, and there's a memorial to Maori Chieftains of the time. The cemetery at St Mary's was closed in 1861, and the last time special permission was granted for a burial was in 1935.

Tomorrow, another exception will be made.  Carrie Allen, already honoured by Taranaki people for her bravery, will be buried at St Mary's. Carrie died on Saturday after a 3 year battle with cancer: she was 12 years old.

Our Feature Album is An Awesome Wave - the debut by British rockers, Alt-J.

They're already up for the prestigious Mercury Prize (second favourite right now), have started an American tour that's become a hot ticket item there, and are playing two concerts in Australia mid-October.

The co-founder of funk pioneers Sly and the Family Stone, Larry Graham is back in business after a 13 year break between records, with a new album out, which features longtime friend, Prince.
Graham is credited with inventing the slap bass sound or as he calls it, thumb and pluck.

Mark Coles of BBC Strand talks with Larry Graham about the new work, called Raise Up.

There are no boundaries in the air, but people come from all over the world to jump out of planes, helicopters and balloons, at a Boogie. Pudding Hill drop zone in Methven hosted the Southern Summer Jam Boogie. The airfield has not only the longest skydiving business, but also the only school in the world. Sage Forest drops in for advice on what to do if your chute fails, and what to wear on jump 100. 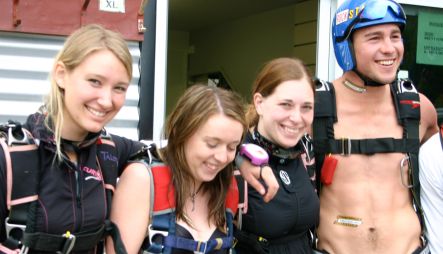 Inventive students come up with original research projects when they enter their local science fair.

4:06 The Panel - Gordon Brown from New Plymouth and Jock Anderson in Auckland.