He Ain't Heavy He's My Brother by The Hollies as chosen by Max Pollard from Hamilton.

Phil Wallington's take on the announcment this week on the closure of TVNZ7.

Cushla McKinney reviews Archangel's Consort by Nalini Singh and The Book of Rachael by Leslie Cannold.

And new music with Nick Atkinson: Jon Toogood's new band is called The Adults. Ladi 6 and Shayne Carter join Toogood on a debut single Nothing To Loose

Also this week: a live track from Tim Barry who played with Chris Wollard at the Kings Arms last week; and a jam from Tiki's new album In The World of Light.

"To be the first to enter the cosmos, to engage, single-handed, in an unprecedented duel with nature-could one dream of anything more?"

That is what Russian Cosmonaut Yuri Gagarin said 50 years ago today before he became the first person to break the chains of gravity. Tonight in New Zealand, and then around the world tomorrow, space enthusiasts will be raising their glasses to toast Yuri Gagarin who spent 108 minutes orbiting around the Earth once and then parachute landed near his Vostok 1 capsule in the plains of Russia.

Donations are the lifeblood of the Salvation Army. Furniture, clothing and household items that sell in the Sallie's shops, provide essential funds to help people in need. The trouble is too many people are using the Salvation Army as a dumping ground after hours, leaving items no one is ever going to buy. The Sallies then have to spend good money to take the junk to the tip.

Part of The Quince Café by Sue Francis, read by Sarah Peirse.

No Line on the Horizon - the most recent release by rock band U2.

Maggie Counihan, author of Backpacking to Freedom, Solo at Sixty.

Ashok Jeram, originally from New Plymouth, settled in Auckland to follow his faith. He's been a Hare Krishna for over forty years and has recently been putting his catering experience to good use by organising food for those in need after the Christchurch earthquake. His community set up a food caravan within the first week of the earthquake, in one of the hardest hit areas of New Brighton. 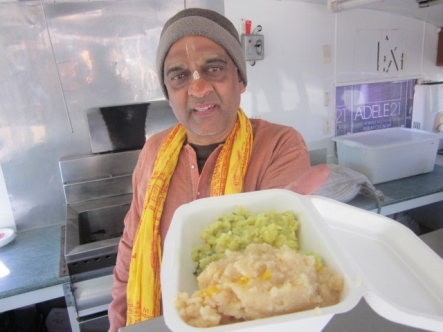